Turkey sees improvement in F-35 talks with U.S. but prepares for sanctions

Turkey and the United States are at odds over Ankara's decision to buy Russian S-400 defense systems which cannot be integrated into NATO systems. 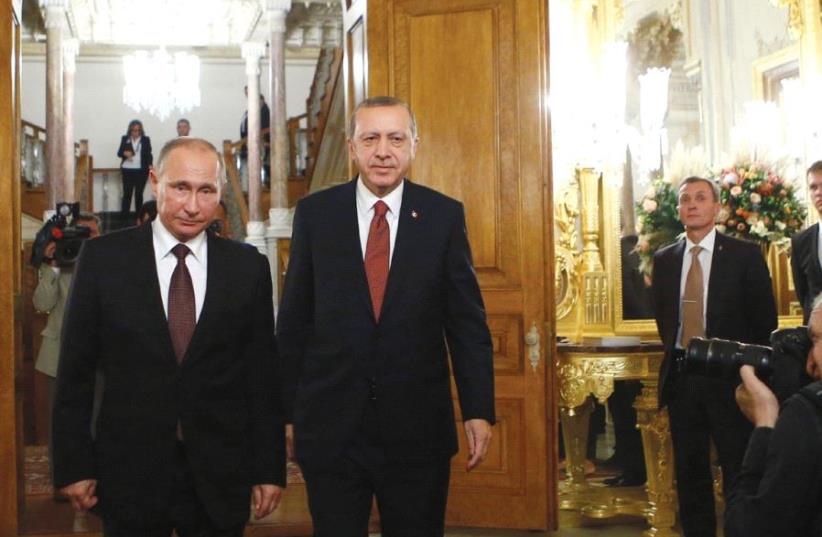 RUSSIAN PRESIDENT Vladimir Putin and his Turkish counterpart Tayyip Erdogan arrive for a joint news conference following their meeting in Istanbul, Turkey, last year.
(photo credit: REUTERS)
Advertisement
ANKARA - Turkish Defence Minister Hulusi Akar said he sees an improvement in talks with the United States over the purchase of Russian S-400 defense systems and U.S. F-35 fighter jets, but added that Ankara was also preparing for potential U.S. sanctions.
Turkey and the United States are at odds over Ankara's decision to buy the S-400s, which cannot be integrated into NATO systems. Washington says the move would jeopardize Ankara's role in building Lockheed Martin F-35 fighter jets, which it says would be compromised by the S-400s.
Speaking to reporters late on Tuesday, Akar said that Turkey was fulfilling its reponsibilities in the F-35 project and that Ankara expected the program to continue as planned. He said talks with U.S. officials were still underway.
He also said Turkey was evaluating a U.S. offer to purchase the Raytheon Co. Patriot systems, adding that Ankara and Washington were working on price, technology transfer, joint production issues on the latest offer from U.S. officials.