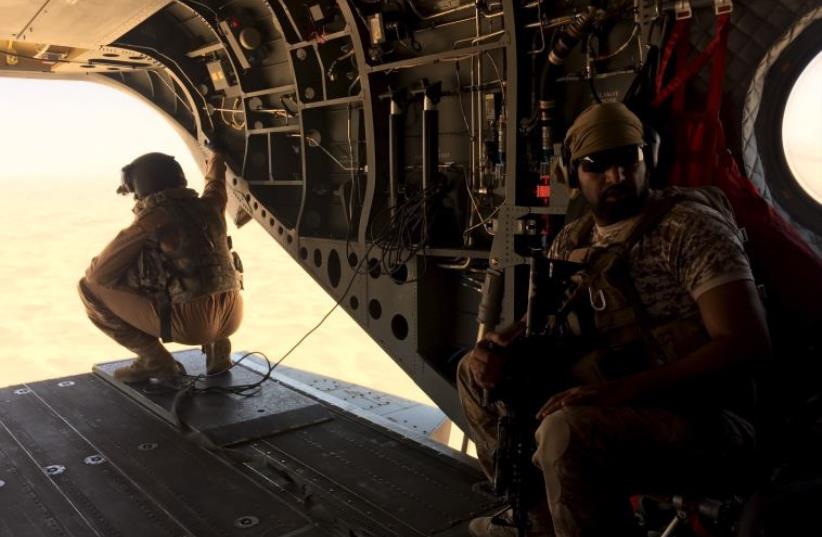 A soldier and an airman from the United Arab Emirates sit in a helicopter flying a small group of journalists to the Marib in central Yemen, September 14, 2015.
(photo credit: REUTERS)
Advertisement
SAFER, Yemen - The glitzy skyscrapers and 21st century comforts of Dubai feel very distant from the barren sand dunes of Marib in central Yemen, the latest strategic prize in a regional power struggle pitting the wealthy Gulf Arab states against Iran.But Salem, who plies the featureless landscape in an SUV that pulsates with American hip hop music, has no regrets about joining thousands of other young soldiers from the United Arab Emirates in one of the poorest corners of the Arab world."Me, I don't know very much about Yemen, but Sheikh Mohammed knows much more and we must do our duty," said Salem, referring to the ruler of Dubai who is also the prime minister of the UAE."I know Yemen's an important country and next to all of ours. Whatever happens here we can't ignore - it will spread to Saudi Arabia and the Emirates. Iran won't stop until it spreads its Persian empire over everywhere here," said Salem, a bearded youth wearing a camouflage head wrap and designer sunglasses.Armed with high-tech Western weaponry, Gulf Arab soldiers are fighting with newfound determination against what they see as the expanding influence of Iran, their non-Arab and Shi'ite Muslim arch-foe, in a war that has ravaged Yemen for six months.The oil-producing province of Marib has become a key battlefield between Iranian-allied Houthi militia and a coalition of Yemenis and Emirati, Saudi and Bahraini troops. Marib forms a gateway to the Yemeni capital Sanaa 120 km (75 miles) to the west, which the Houthis seized last year.Mindful of similar sectarian-fueled conflicts fragmenting other Arab states such as Iraq and Syria, the Gulf Arab and Yemeni fighters see their common cause in Yemen helping to revive a sense of Arab solidarity."They're not foreigners to us, they're brothers," said UAE-trained Yemeni soldier Abdul Wahad al-Shadaddi, sitting in the bed of a Toyota pickup with comrades who, like him, tote AK-47s and have bandoliers of bullets draped over their shoulders."For six months we've fought and suffered in Marib, keeping just a few small districts until they came to our aid. Because they fight for a just cause, God will grant them and us victory, and our province will be ours again in two weeks."The coalition wants to restore a Yemeni government ousted by the Houthis in March, a development seen by the Sunni Gulf Arab states as a sign of Shi'ite Iran's expansionist intentions. Tehran denies providing military support to the Houthis.The coalition intervention in Yemen was initially limited to air strikes but now also includes a ground war and, despite the Gulf Arabs' far superior firepower, it is not proving easy.A Houthi missile killed more than 60 Gulf Arab troops stationed in Marib province on Sept. 4, including 52 Emiratis, the worst loss ever suffered by the UAE military, one of the most advanced in the Arab world.The losses have deepened the sense of personal engagement in the war among the Gulf troops.

"IT'S A PERSONAL THING""We're not going to forget our blood. It's now a personal thing for the soldiers, (even though) we came to support the Yemenis," said Brigadier General Ali Seif al-Kaabi, commander of UAE forces in the area.Of the 5,000 Gulf Arab troops now stationed in Yemen, al-Kaabi said some 4,000 came from his country.Asked whether the Emirates risked being dragged into a quagmire in Yemen, a ruggedly mountainous and politically fractious backwater which has chewed up Arab armies before, al-Kaabi was defiant."We are not a small country, we have military experience," he said, reeling off the UAE's role in international military operations such as the Kuwait-Iraq crisis of 1990-91 and peacekeeping missions in Somalia, Kosovo and Afghanistan.As the ground offensive with tanks and heavy artillery grinds westwards through craggy mountains towards Sanaa, the campaign is bound to generate further casualties that will be especially painful for a small nation like the UAE.Grim news on Tuesday of a soldier's death in a land mine explosion crackled over the radio in the tent perched beside a sand dune that serves as a command center for the Emirati forces outside the Gulf Arab base at Safer."There's one martyr and one wounded, repeat, there's one martyr and one wounded," the voice from the front line echoed.A couple of dozen kilometers away, the frequent strafing by their attack choppers has not scared off the Houthis, who are equipped with comparatively puny Kalashnikovs and RPGs.The Houthis condemn the Gulf Arab onslaught - including the hundreds of air attacks that have killed many of the more than 4,500 Yemenis who have died so far in the war - as crimes against humanity.They chant the slogan "Death to America, Death to Israel" - a rhetorical nod to Iran's late revolutionary leader, Ayatollah Khomeini - and say they are leading a popular uprising against a corrupt Yemeni government and Western countries they see as in thrall to Arab oil."THREAT TO ALL"Despite all the dangers, the enthusiasm is palpable among the troops at Safer base, a huddle of hastily-built prefab structures tucked among the dunes.The stress of combat and the constant roar of Apache and Chinook chopper blades have yet to dim the summer camp vibe.Young men in their 20s traipse around the base in flip-flops and tee-shirts or sometimes outfits that reflect the dual ancient-modern aspect of this war - Yemeni tribal sarongs along with pixelated camouflage.Their relatively wealthy background and high-tech gadgetry sets them apart from the Yemeni tribal recruits and local rag-tag fighters whom they have trained.But for Sultan Ali Arada, the Yemeni governor of Marib who backs the exiled government, the Gulf-led military campaign is a noble gesture of solidarity by stronger, richer Arab states with a weaker cousin facing an Iranian-backed plot to destroy it."There are basic things people need to lead a human life and that's the presence of a state, ... Yemen was deprived of this by a militia helped from outside," said Arada, clad in a traditional robe and headscarf, referring to the Houthis and Iran."The Arab nation saw this attack was a threat to them all - the fall of Yemen to a militia bent on chaos that believes in nothing but death, as their slogan 'death to America' says. Why death? People want life, and you give them death."Commanders at the Safer base say the coalition brings together local knowledge and 21st century firepower.A young Bahraini officer looked at the Yemeni forces and smiled, acknowledging the oddness of their coalition."We work well together, I think we complement each other," he said. "We have, how can I say it, the muscle and the technology, but they have the eyes," he said."Me, I can't tell them apart," he said, referring to the group of irregular Yemeni fighters - some of them with their faces masked by scarves or indulging in Yemen's national pastime of chewing narcotic leaves known as qat - and the enemy forces which also draw from Yemen's many armed tribes."But they know everybody around here. They can tell the good guys from the bad guys and that is helping us win."