US concerned Iranian ships may carry arms to Yemen

Defense Secretary declines to say whether US might attempt to board Iranian cargo ships, if needed. 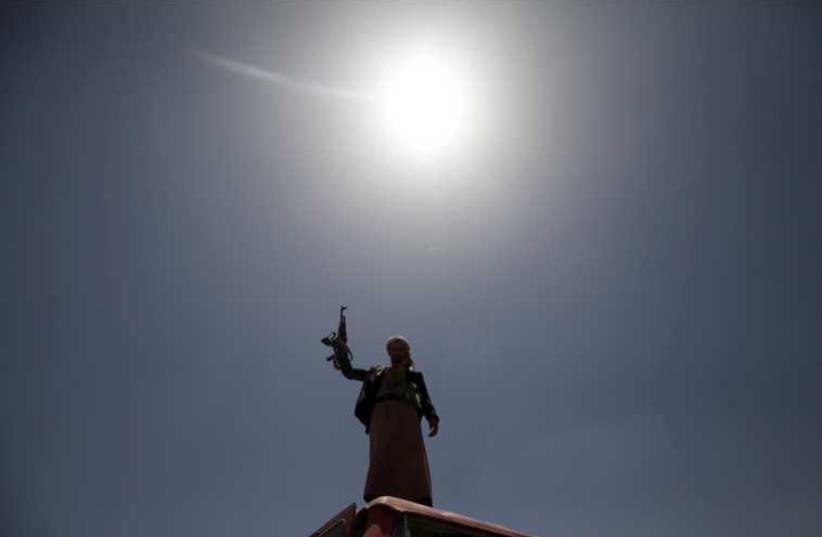 A follower of the Houthi group raises his weapon as he stands on a vehicle on a damaged street, caused by an air strike that hit a nearby army weapons depot, in Sanaa
(photo credit: REUTERS)
Advertisement
MOFFETT FIELD, California - The United States is concerned a group of Iranian cargo ships may be carrying advanced weapons to Yemen, Defense Secretary Ash Carter said on Wednesday, as he called on Iran to avoid "fanning the flames" of the conflict with arms deliveries.Asked whether he thought weapons were on board the Iranian ships, Carter said: "We're certainly concerned about that.""And there's no reason for anybody to be delivering advanced weapons into a situation that's already gotten way beyond what is reasonable there," he told a small group of reporters, shortly before landing in California. He did not elaborate.On Tuesday, President Barack Obama said the United States had warned Iran not to send weapons to Yemen that could be used to threaten shipping traffic in the Gulf.Washington this week deployed additional warships off Yemen's coast, partly in response to the convoy of Iranian cargo ships in the Arabian sea.Carter acknowledged that the movement of the US warships, including the aircraft carrier USS Theodore Roosevelt, gave Obama "options." But he declined to say whether the United States might attempt to board the Iranian cargo ships, if needed."I'm not going to tell you what the United States is prepared to do. As the president said, we have options," Carter said.Saudi Arabia declared an end of the first phase of its campaign on Tuesday after almost a month of air strikes against the Iranian-allied Houthis. But hours later, air strikes and ground fighting resumed and the International Red Cross described the humanitarian situation as "catastrophic".A Gulf official told Reuters that the new phase of the Saudi campaign would see a downscaling of military activity by the Saudi-led coalition with no further bombing of fixed military targets.On the political front, the official said, there was movement toward a dialogue.Carter lamented the violence but voiced hope for peace efforts, saying the United States had hoped to "get the parties back to the table."He said: "We would like to see the parties get back to a political settlement, and get the country back to some decent level of governance and violence to subside. That's going to take all parties to the conflict to be willing to step back and talk."