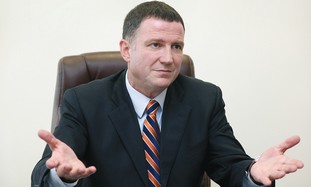 Knesset Speaker Yuli Edelstein submitted an ethics complaint on Wednesday against Arab MKs who ripped up copies of the “Prawer bill” regulating Beduin land claims.Edelstein also refused to allow MK Ahmed Tibi (United Arab List-Ta’al) serve in his capacity as deputy Knesset speaker until the Knesset Ethics Committee releases its ruling on the latter’s behavior.On Monday night, ahead of the Knesset’s first vote on the bill, one Arab MK after another – Jamal Zahalka (Balad), Afo Agbaria (Hadash), Haneen Zoabi (Balad), Masud Gnaim (UAL-Ta’al), Muhammad Barakei (Hadash) and others – demonstratively ripped copies of the bill. Tibi also poured water on the legislation, saying it does not deserve respect.Agbaria also called for a third intifada if the bill, which legalizes around 63% of Beduin land claims, is implemented.“The Knesset speaker should respect our protest,” Zahalka said in response to the ethics complaint. “This is not something we do every day. We acted out of deep pain and as representatives of our public.”Zahalka added that Monday was “a difficult day, and this is not legislation, but strangulation.”Edelstein could not comment on the ethics complaint, because the Ethics Committee is closed to the press and Knesset regulations forbid MKs from publicizing complaints.On Monday night, each time an MK tore a bill, Edelstein removed him or her from the plenum and said he would submit a complaint against the legislator.Edelstein also announced in the plenum that his office received dozens of angry emails from citizens who found the MKs’ behavior offensive.“This is a Mark of Cain on the forehead of anyone who supports the bill,” Tibi stated on Monday. “This is a usurping bill! It expels people from their lands and homes for the second and third time after the tragedy of 1948 [Israel’s establishment].”When Barakei argued against the bill, Culture and Sport Minister Limor Livnat shouted out that he is “obnoxious,” and Barakei told her to shut her mouth.“Don’t talk to me that way,” Livnat responded.“Shut up,” Barakei shouted back.Meanwhile, Bayit Yehudi faction chairwoman Ayelet Shaked submitted legislation that would remove MKs from their position if they call for violence, in response to Agbaria’s call for a third intifada.“MKs will have to account for their actions when they make a statement or behave in a way the legitimizes incitement against the Jewish democratic state and its citizens,” Shaked said.The legislation is an amendment to Basic Law: The Knesset, which would end an MK’s term if he or she rejects the State of Israel’s existence as a Jewish and democratic state, incites to racism or supports armed conflict by an enemy state or terrorist organization against Israel.Those are currently the conditions to prevent a candidate or party from running for the Knesset.Two-thirds of the Knesset House Committee would have to vote to remove the MK, and seven High Court judges would vote on whether authorize the result.“We must protect democracy from those trying to harm it from the inside,” Shaked stated.“Democracy is not just a means, it’s an end. We cannot help MKs be elected democratically and then stand by when they say and do anti-democratic things that will endanger the future Jewish and democratic character of the country.”
Advertisement
Subscribe for our daily newsletter