Metzger: Haredim have no right to force segregation on bus

By LAHAV HARKOV, HERB KEINON, JPOST.COM STAFF
DECEMBER 19, 2011 00:43
Chief Rabbi Yona Metzger 311
(photo credit: Ariel Jerozolimski [file])
Advertisement
Ashkenazi Chief Rabbi Yona Metzger criticized Sunday the segregation of men and women on public transportation.The haredi community does not have the right to impose its practices on public bus lines, according to Metzger.RELATED:
'Exclusion of women is form of violence'
Supreme Court may allow segregated buses“If we want there to be segregation, it would be legitimate for us to establish our own transportation company,” he explained, speaking in an interview with Army Radio.“We [the ultra-Orthodox] don’t have the authority to force our ideas on others,” he continued. “This country does not belong to the haredi community.”Prime Minister Binyamin Netanyahu also addressed the controversy over the increasing exclusion of women in the public domain, saying “a fringe group must not be allowed to dismantle what we share in common.”The public domain must be kept “open and safe” for all Israeli citizens, Netanyahu said at the opening of the weekly cabinet meeting. Israel is a “mosaic” of Jews and Arabs – secular, religious and haredi. 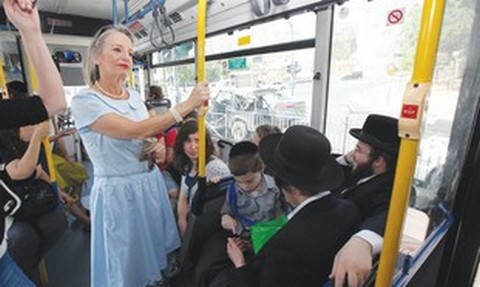 He said that while up until now there was peaceful coexistence and mutual respect, recently there have been attempts to unravel that coexistence.The prime minister said he was “strongly opposed” to separate seating for males and females on buses, and that “marginal groups cannot be allowed to dismantle our common denominator.”Opposition leader Tzipi Livni praised 28-year-old Tania Rosenblit, a woman who refused last week to submit to the demands of haredi passengers to take a back seat on a bus traveling from Ashdod to Jerusalem.“Even if [Tania] didn’t intend to become a symbol for her actions, there’s no doubt that her perseverance shows the need for everyone fearing for Israel’s character to fight and not give up,” Livni wrote on her Facebook wall. “Tania revealed personal courage and in this decisive moment I call on all to join the struggle over Israel before it is too late.”Transportation Minister Yisrael Katz met with Rosenblit on Sunday and ordered an investigation into the incident. It will check whether the bus driver and the Egged bus cooperative violated the Transportation Ministry’s policy against gender segregation.Rosenblit on Sunday accepted an invitation from Culture and Sport Minister Limor Livnat to speak before a subcommittee of the Ministerial Committee on the Status of Women, established on Tuesday to formulate a plan for dealing with the exclusion of women from the public domain.Livnat told Rosenblit that she was proud of her for standing up for her beliefs, and for publicizing the “shameful and severe behavior of a specific group of people.”The subcommittee, in which the Transportation, Religious Services, Interior, Defense and Justice ministries are all represented, plans to present proposed solutions to the government within 75 days.The issue of gender segregation has gained steam recently as some ultra-Orthodox have opposed hearing women sing during IDF ceremonies and women walking on the same sidewalk as men in their communities.
Advertisement
Subscribe for our daily newsletter