By JPOST.COM STAFF, YAAKOV LAPPIN
DECEMBER 13, 2013 13:25
Advertisement
Police worked to help dozens of drivers stranded on Jerusalem's streets and on the entry roads into the capital as intermittent snow continued to fall on Friday morning. Roads to the capital remained closed Friday morning. In the afternoon outbound lanes of Highway 1 reopened to traffic from Jerusalem in the direction of Tel Aviv. IDF vehicles and snow plows were also aiding police and municipal employees in efforts to aid motorists.Ben-Gurion Airport closed on Friday for about an hour due to the storm battering the country.Two incoming flights were redirected to Larnaca, Cyprus. Due to heavy rains in central Israel police were preparing to close the Ayalon Highway in Tel Aviv on Friday.As of 1:30 p.m. on Friday the level of the Ayalon River canal was 1 meter short of spilling onto the road between Tel Aviv and Ramat Gan.Flooding also closed Highway 6 northbound between the Soreq and Daniel interchanges due to ice on the road. The Home Front Command set up a control center in Latrun overnight Friday, and deployed units to snow-stricken areas. Drivers stranded on Route 1 and Route 443 at the entrance to Jerusalem were being evacuated to emergency help centers established at the Jerusalem Convention Center, in Mevaseret Zion and at the Ofer military camp.Some 2,000 stranded motorists in the capital and on the highways leading to the city were rescued by police, IDF and Border Police forces. 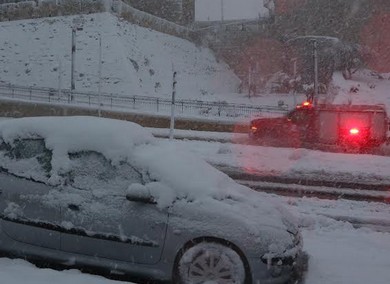 Jerusalem Mayor Nir Barkat turned to IDF Chief of Staff Lt.-Gen. Benny Gantz and Jerusalem District police chief Yossi Pariente for help in evacuating the motorists."We are currently using all means available to save the people stuck in the storm. Only after the weather calms will we be able to open all of the roadways in the city," Barkat said Friday morning,  adding that the city was facing "a battle against a rare storm, the likes of which we have never seen." The municipality called on drivers to avoid coming to Jerusalem and instructed the city's residents to stay off the roads until the storm had subsided.Due to heavy rains and snow conditions in many parts of the country, Police
issued a general advisory on Friday morning for the public not to leave their homes.Police said that there was an increased risk of fatality for drivers in the current conditions.The Egged bus company announced that it had stopped service to the capital and that it would only restart service on Saturday night contingent on improved conditions.Jerusalem received between 30 centimeters and half a meter of snow by Friday morning depending on the area in the city, Israel Radio reported. The snowfall over the central mountain peaks, including Jerusalem and Gush Etzion was expected to let up by around noon on Friday, according to IMS forecasts.Electricity was cut on Friday morning to thousands of homes in Jerusalem and in the surrounding area due to downed tree branches that fell on power lines in snowstorm.Israel Electric Company (IEC) repair crews were having difficulties reaching the power lines due to snow on the roads. The IEC said some of the towns and neighborhoods that experienced power outages Friday included Mevasseret Zion, Har Adar, Abu Ghosh, Tzur Hadassah, Givat Ze'ev and Binyamin.  The IEC has asked that the public be careful and stay away from cut wires, as well as report dangers immediately to the IEC service center at *103, or call the police at *100. The Defense Ministry, working with the Public Security Ministry and the Home Front Command, dispatched two convoys of buses, bulldozers, and trucks with generators to the capital to assist civilians evacuated to rescue assistance centers.One convoy set out to Mevaseret Zion via Route 1, and the second headed out to Bet Horon via Route 443. Some 2500 warm meals have been sent by the Defense Ministry to the stranded motorists. An IDF source on Friday that said dozens of heavy army vehicles and assistance crews were sent to clear blocked roads from 1 a.m. on Friday onwards. "We're prepared for the possibility of the storm continuing into the coming days and we're ready to provide further logistical support, as well as distributing medicines and food," the source said."We expect difficult weather conditions to continue, and we're asking all civilians to listen to instructions from emergency services and not come to Jerusalem," the source said. The army has gone on a state of alert on the Golan Heights due to the storm, and has deployed dozens of rescue crews and heavy vehicles there on standby. "We are more experienced with dealing with this kind of weather in the Golan," the source said. Some ten centimeters of snow had accumulated Friday morning in the northern Golan Heights from Kibbutz Ortal northwards.A number of area roads were partially closed and snow removal was in progress. Public transportation was shut down in the northern Golan until further notice.The Golan Heights regional municipality warned tourists not to cross fences and walk into fields due to the risk of stepping on mines.Snow was also coming down Friday morning in Safed, Meron, Sasa, Ma'alot, and in Upper Nazareth. Police told motorists not to travel  to Safed as the access roads to the city were closed. A number of vehicles were stuck on the roads leading to the Galilee city. The ForecastIn contrast to the snow that piled up in the capital the Israel Meteorological Service (IMS) said that in the North as of 9 am Friday only a few centimeters of snow had fallen. Overnight, between 50 and 70 millimeters of rainfall drenched the coastal plain and the Shfela region, accompanied by hail and thunderstorms. Flooding and water damage struck the area between Ashkelon and Netanya, the IMS said.Strong rainfall will continue throughout the day Friday, while the unseasonably low temperatures will maintain the snowy conditions in central mountains above 600 meters, according to the IMS. Tens more centimeters of snow should fall, bringing the snow level potentially up to over 1 meter by Saturday morning. In the North, snow will also continue to fall in mountains over 600 meters, though accumulating only up to about 10 centimeters by Saturday morning.Due to the influx of cold air, sleet is expected to begin to cover Mitzpe Ramon by noon and turn into snowfall by the afternoon, the IMS said. In the evening, snow will likely fall over the Negev highlands, stacking to about 1 centimeter. Heavy rain, accompanied by thunder and hail, will continue to drench the coastal plane, with risk of flooding in the region between Kiryat Gat and Hadera, the IMS said. Toward evening the Ayalon and Yarkon rivers may overflow after reaching full capacity. The Jordan Valley, Judean Desert and Negev may also receive floods, and Road 90 will continue to face challenges, the IMS said.Rain will continue through Saturday until it begins to weaken and eventually ceases by nighttime, the IMS reported. Snowfall in Jerusalem should turn to sleet by noon and stop by the afternoon. As the skies become clearer, however, the temperatures will remain cold, falling to below zero in many places and causing icy – "black ice" – road conditions, the IMS warned. Sharon Udasin contributed to this report.
Advertisement
Subscribe for our daily newsletter