How one teacher's initiative transformed the Ahmed Sameh school from severely neglected to a flourishing educational institute.

By DANIELLE ZIRI
NOVEMBER 30, 2013 14:33
Ahmed Sameh school 370
(photo credit: Courtesy of the Ahmed Sameh school in Abu Tor.)
Advertisement
Anyone who would have walked past the Ahmed Sameh elementary and middle school for boys in the Abu Tor neighborhood of east Jerusalem just three years ago would have agreed to say it was severely neglected. The place consisted of concrete, mud and trash scattered everywhere. To top it all, the pupils, who for the most part come from disadvantaged backgrounds, had adopted vandalizing the school as a pastime, for lack of better afternoon activities.Today, however, Ahmed Sameh is literally flourishing.   The change begun when sustainability teacher Firas Hamed arrived to Ahmed Sameh as an intern in 2010 and begun working on an ecology project with one pupil, as a way of treating some behavioral issues.“We begun to plant, and by the end of the year, it had helped him improve academically too,” Hamed explained.Seeing the child’s success, he begun expanding the activity to a small group of special education children.Before he knew it, the few potted plants turned into a large collection, including flowers and spices, displayed on tables and chairs they had found around the school. 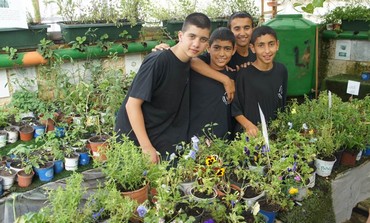 As winter was approaching and his activity was gaining more and more popularity at the school, Hamed had the idea of building a greenhouse to cover the plants.In order to be able to carry out the initiative, Hammad and the school applied to the Fund for Innovative Teaching, which selects 40 to 50 original teachers' initiatives each year and provides them with the financial support they need to develop.To do so, the Fund works in partnership with the Ministry of Education and receives donations from philanthropic foundations, including the Beracha Foundation.“Now we have a greenhouse, with a system for collecting rain water on the roof,” he told The Jerusalem Post. 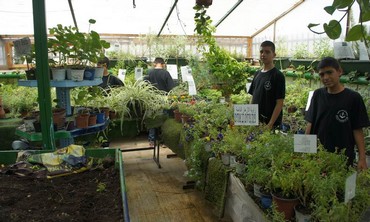 Beyond the financial help, the Fund also provided Hamad with the guidance of a pedagogical counselor who trained the teaching staff on how to maximize the greenhouse in order to serve educational purposes.Hamed’s project then continued to grow and rubbed off on the school’s garden, which had been completely neglected for years, and where the pupils built a sitting area out of old tires in order to conduct classes on ecology and sustainability.“We divided it into two groups of students: one is responsible for taking care of the plants and one does research,” he said, “They learn about the plants and they do experiments to check temperature, humidity, and different environmental effects on certain plants, like what kind of water is better? Does the plant do better inside or outside?”The beauty of the project, Hamed explained, is that it is conducted entirely by the pupils.“It’s more than planting,” he told the Post, “It influenced their self-confidence, their behavior, their academic success, their curiosity.” 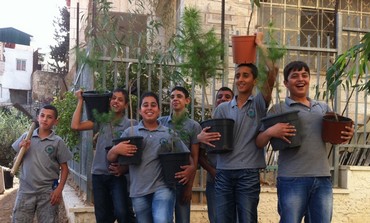 “There was no sustainability here before,” he added, “Sustainability is not just plants, it’s a social thing, because now they explain their work to other people, there is a good atmosphere, they learned not to waste things, why it is not good to throw away plastic bags... etc.”Through the workshop, Hamed explained he brings up different global subjects and questions to discuss with the pupils, including water, energy, and global warming, among others.After becoming more and more involved in the greenhouse, the students began to imitate their work at home, in their personal back yards, and the greenhouse project has now expanded from inside the school to the whole neighborhood of Abu Tor.“I took the kids to plant and work in the gardens of neighbors around the school. At first they didn’t understand why, but after we helped him twice, the neighbor started doing it himself, and slowly but surely, we saw a few more gardens around the school” Hamed said.In addition, several foreign delegations of educators and representatives of other schools across the country have passed by Ahmed Sameh in the past year to see the project. Pupils guide their visits and provide explanation on their work.“My mission is to work on behavioral issues through the land, through going back to the roots, back to the ancient Arab culture,” he added, “There are things to do, things to learn. The goal is also to spread this from the school to the community and then the entire neighborhood. That way, everyone will improve their lives here.”“When a pupil comes and tell me that he cleaned, recycled and planted plants at his house, that is my reward,” he said,  “When I see them protecting the plants from kids who sometimes want to destroy them, it gives me strength.”Principal of the school Najwa Farahat told the Post that the project has “raised an entrepreneurial spirit” in the whole school and that almost all of the pupils and teachers at Ahmed Sameh are now involved in it.Beyond improving the school’s appearance and atmosphere, she also stressed that studying and maintaining the plants has also had a significantly positive effect on the pupil’s academic achievements.“There were kids who had behavioral problems, kids who were going to drop out, and through this project we gave them the opportunity to do things that are unusual and that they love,” she explained, “They needed to get out of the school routine a little bit.”“Students now feel differently about school,” Farahat added, “They are interested in what they study and they like coming to school. It’s a pleasant place, a place they feel comfortable in.”“When you give them that, you are letting them taste their success,” she said,She and the school staff are planning to organize a course for parents to come and learn about the greenhouse, in order to facilitate the dialogue with their children at home.”Principals of all schools should encourage teachers’ initiatives,” Farahat told the Post, “If you believe in your teachers and you show them that you believe in them, they can do really great things.”Executive Director of the Fund for Innovative Teaching, Yosefa Dar, said that the initiative in Abu Tor is “a classic example of an initiative that began with one teacher and led to a change from all teachers in the school  and the community.”