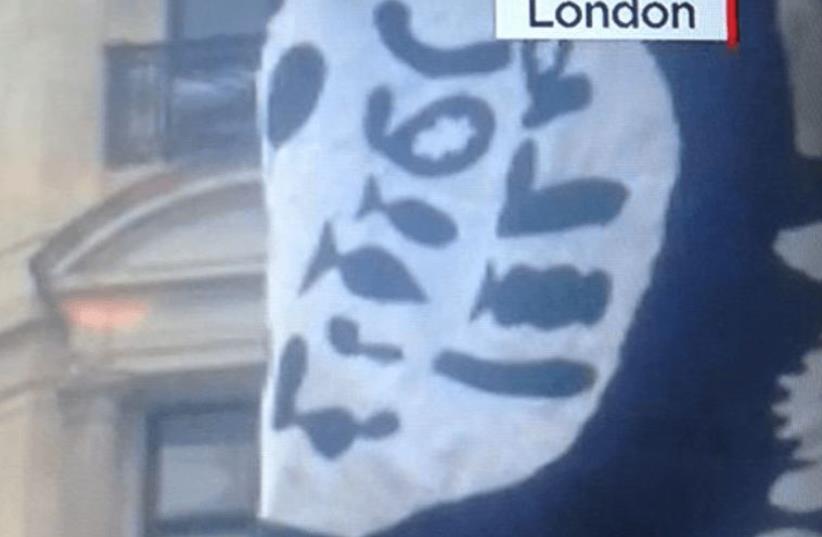 Satirical "ISIS flag" spotted at gay pride parade in London
(photo credit: screenshot)
Advertisement
A CNN report went viral this weekend when reporters mistook a flag depicting sex toys with the flag belonging to the Islamic State terrorist group."This man dressed in black and white was waving what appeared to be a very bad mimicry but very clear attempt to mimic the ISIS flag, the black-and-white flag with the distinctive lettering," CNN correspondent in London Lucy Pawle reported live Saturday from a Gay Pride parade in the English city. "If you look at the flag closely it's clearly not Arabic, in fact it looks like it could be gobblygook (gibberish). But it's very distinctively the ISIS flag," Pawle told anchor Suzanne Malveaux in the CNN studio. "Anyway, I seem to be the only one who spotted this, and none seems to be raising any questions or pointing it out," continued the call-in "exclusive" about the flag that both journalists seemed to have not been looking very closely at.
While the design and coloring of the banner are similar to those of the radical Islamist group's iconic flag, where a black text inscription of the Arabic shahada is located inside a white circle on the ISIS flag, the CNN reporters appear to have missed the not-so-subtle "inscription" made up of phallic imagery. According to media reports, the flag was displayed during the march in protest of Islamic State's violent treatment of homosexuals. While it appeared in footage that the colorful crowd participating in the march was aware of the symbolic message, the CNN reporter said she had attempted to notify police and the parade's organizers of the perceived ominous item. CNN reportedly later removed footage of the report from its website
Advertisement
Subscribe for our daily newsletter