The Mossad responded quickly when Linda Sarsour tweeted about her phone issues.

Screenshot from Twitter of interaction between Linda Sarsour and The Mossad.
(photo credit: screenshot)
Advertisement
The satirical Twitter handle @TheMossadIL, playing off of Israel’s Intelligence Agency, hinted that they were the ones responsible for prominent Palestinian-American activist Linda Sarsour’s phone issues. Linda Sarsour took to Twitter on Tuesday to ask for help with her cellphone but did not get the answers she expected. “I just lost all my text threads? I have an iPhone. Any idea why?” she asked her 230,000 Twitter following. The Mossad Twitter account replied to Sarsour’s post with a simple “Yes,” hinting that the Israeli Intelligence Agency is responsible.This is not the only joke about information gathering by the satirical account created in September 2016. Recent events such as the solar eclipse in America also caught their eye, where they tweeted “Thank you for using those ‘protective eclipse glasses’ everyone, we have now collected your thoughts.”

Thank you for using those "protective eclipse glasses" everyone, we have now collected your thoughts. https://t.co/NiS1TGPyD9

The mock Twitter account also took credit for Steve Bannon’s ousting from the White House, tweeting “Bannon's gone everyone. I believe a thank you is in order.”

Bannon's gone everyone. I believe a thank you is in order. 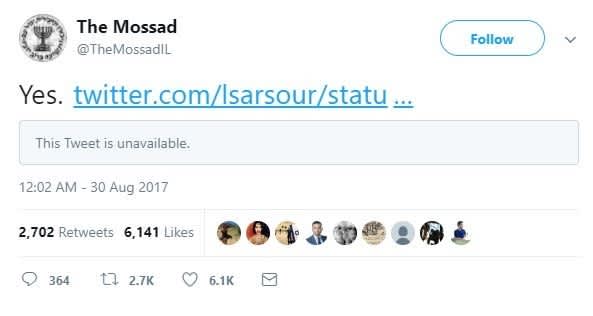