Was the ancient landscape similar to what we see today?

By NORMA FRANKLIN, JENNIE EBELING
FEBRUARY 24, 2015 13:32
The treading floor and winery complex after excavation
(photo credit: DR. NORMA FRANKLIN)
Advertisement
The JPost Holy Land column brings you the latest archaeology news and stories from Israel in collaboration with the University of Haifa.
The site of Jezreel has a long and rich history that we are just beginning to understand. Although an important Iron Age military compound was brought to light on Tel Jezreel during excavations in the early 1990s, a comprehensive archaeological survey of the surrounding landscape, including the Spring of Jezreel located in the Jezreel Valley below, was not conducted. Members of the current Jezreel Expedition team had no idea of the extent of the site and any connection that may have existed between the tel and the spring when we decided to initiate new exploration of the site in 2012. Was the ancient landscape similar to what we see today? Landscapes are changing fast as modern agricultural methods, roads, railways, forestation and deforestation, housing projects, and other modifications to the landscape alter the topography and hide earlier remains, and we knew that time was running out for Jezreel. We thus decided to utilize new technology – LiDAR – to better understand the history of occupation, recognize human impact on the landscape of greater Jezreel, and assist us in choosing areas to excavate beginning in 2013.LiDAR had already been used with spectacular results at archaeological sites in Central America and in the United Kingdom. Although expensive, it is fast and serves as a base for future archaeological work. We used airborne LiDAR (Light Detection and Ranging) rather than the terrestrial version and were the first archaeological expedition to do so. The LiDAR equipment is housed below a small engine aircraft, and a dense network of laser beams are directed vertically onto the ground. Point cloud data is collected and processed to produce a ‘first pulse’ DSM (Digital Surface Model) that includes the top of any vegetation and buildings and a ‘last pulse’ DTM (Digital Terrain Model) that reflects the actual ground surface. The result is an accurate geo-referenced ‘map’ of the terrain. The LiDAR ‘map’ data can be combined with historical maps and aerial photographs to produce an infinite variety of views of the site that provide clues regarding ancient use of the landscape and lead us to areas of the site to survey and excavate. 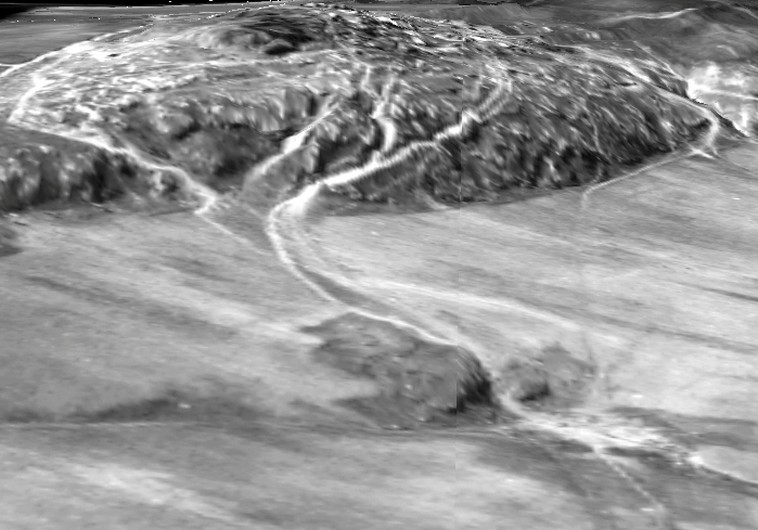 The LiDAR scan we commissioned in February 2012 covered 7.5 square kilometers of greater Jezreel and we chose to carry out a traditional foot survey of a core area of approximately three square kilometers the following June with a small group of undergraduate archaeology majors from the University of Evansville.The results were dramatic. With the LiDAR mapping data in hand and armed with a GPS unit, cameras, chalkboards, and keen-eyed student surveyors, the Jezreel Expedition spent several weeks exploring Jezreel on foot. We focused primarily on the north-facing slope that runs from Tel Jezreel to a large agricultural terrace below and the area of a newly-identified lower site – Tel ‘Ein Yizre’el – just above the spring. We discovered 361 features, including 60 tombs, 57 agricultural installations for processing grapes, olives and cereals, 21 ancient quarries, scores of walls, and nearly 100 cisterns and systematically collected pottery sherds and stone artifacts dating from the late Neolithic period to the 20th century. Combining LiDAR technology with old-fashioned foot survey confirmed that the site of Jezreel is much larger than previously thought. We identified a new lower tel, extensive cemeteries dating to a number of different periods, and a series of paths or roads that connected different parts of the site to the spring in the valley below. Building on the LiDAR scans and the results of our ground survey, our 2013 and 2014 excavations exposed several phases of an Early Bronze Age settlement; the remains of a monumental Iron Age building on the northern edge of the upper tel with bedrock masonry blocks and an impressive interior water cistern; an intriguing medieval building or monument on a promontory overlooking the valley; and a rock-cut winery complex and other installations that underscore the agricultural abundance that is traditionally associated with the Jezreel Valley. We will continue exploring Jezreel for the next several years in order to reconstruct the long and complex settlement history of this strategically-located site.The Jezreel Expedition is directed by Norma Franklin of the Zinman Institute of Archaeology at the University of Haifa in Israel and Jennie Ebeling of the University of Evansville in Indiana, USA.