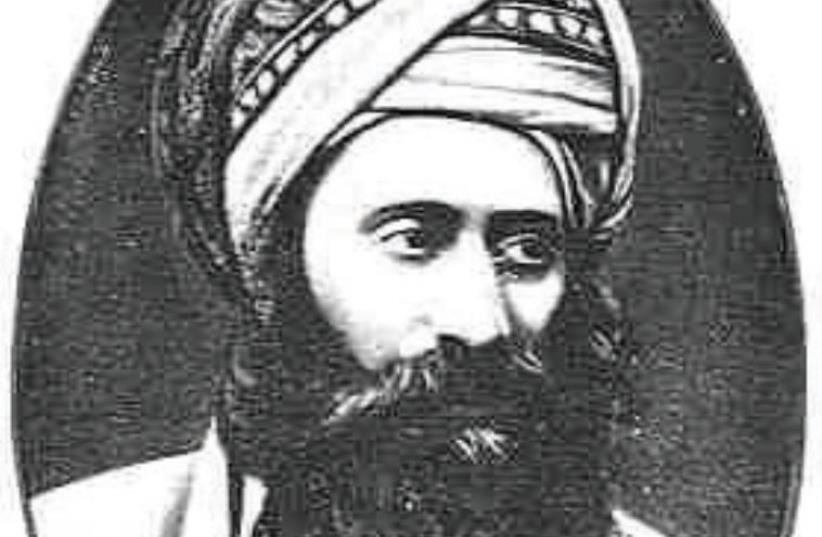 Master Kabbalist Rabbi Yosef Hayim, known as the Ben Ish Hai
(photo credit: Wikimedia Commons)
Advertisement
It is a lofty endeavor to be able to pray in such a way that the supplicant’s focus mystically brings letters together in patterns that affect the world. Such prayer – known in kabbalistic parlance as praying with kavanot (mystical intentions) and yihudim (mystical unifications of the Divine name) – is central to the work of the kabbalist. Alas, theurgy is beyond the ability of most.Hassidism, almost from its earliest days, recognized that this objective was unattainable for most people. Without despairing and without abandoning mystical objectives, hassidism developed what might be termed “mysticism substitutes.”Thus, for instance, Rabbi Kalonymus Kalman Halevi Epstein of Krakow (1751-1823), author of the classic hassidic work Maor Vashamesh (Breslau 1842), acknowledged that not every person is able to pray in so lofty a manner. In the words of the Maor Vashamesh: “Because one needs great holiness and asceticism, not every person who wishes to assume the name” – meaning to be of great piety – “may assume it.” The Maor Vashamesh’s reference to assuming “the name” is taken from an earlier source (M. Brachot 2:8) and could be read as: “Not every person who wishes to utter the Divine Name may do so.”This lamentable situation leaves us in a bind: We desire to soar to lofty spiritual heights, yet we are weighed down by our own mystical ineptitude.The Maor Vashamesh presents a solution: “And I heard from my holy teachers of saintly memory, that even if a person lacks abundant holiness and asceticism, and that person is unable to perform mystical unifications… nonetheless the person should perform the service – the service which is prayer – with great fear and love [of the Almighty], with overflowing excitement and immense yearning and self-sacrifice.” If a person prays fervently in this manner, says the Maor Vashamesh, then even if that person does not perform mystical unifications “all the mystical unifications that are apt for that person’s prayer… they unify themselves on their own.”The notion of mystical unifications happening on their own when a person prays fervently appears a second time in Maor Vashamesh. In that context the spiritual work credits the famed teacher Rabbi Elimelech of Lezajsk (1717-1786) with the idea.“Automatic theurgy” sounds somewhat contradictory. Nonetheless, it is a fantastic – and at first blush, bona fide – hassidic teaching: a democratic approach to serving God that opens the door for even the mystically inept; an idea grounded in Jewish mystical tradition; a teaching published in a foundational hassidic work; the voice of a saintly hassidic teacher, citing one of the great hassidic masters from the nascent period of hassidism. What could be more hassidic! Given the apparent hassidic nature of this teaching, we might be intrigued to find a similar notion in the non-hassidic milieu. The great Baghdad rabbi Rabbi Yosef Hayim (1834-1909) – better known by the title of his most famous work Ben Ish Hai – offered a similar idea: “Even though we do not know how to focus on the hidden aspects of mitzvot and the prayers, the Almighty will complete our kavanot and will credit us as if we have intended all the kavanot that are appropriate to intend.”Ben Ish Hai cites the Zohar as his source. If the Zohar is indeed the common source, we might look askance at the Maor Vashamesh, which quotes more recent teachers rather than citing the earlier source. Yet a Zohar source would explain how this idea could be found in two distant mystical traditions.This is the Zohar passage cited in Ben Ish Hai: “Establish and repair Your arrayal appropriately above… even though we do not know how to deploy the will, only the act itself” (Zohar II:93a). The cryptic line is far from an explicit source for the notion that kavanot and yihudim will occur on their own. This leaves us with a number of other possibilities for understanding the link between the Ben Ish Hai and the earlier hassidic teaching: First, even if the Zohar is not the source, there may be a different common source that gave birth to the idea in two different mystical traditions.Second, perhaps the Ben Ish Hai was familiar with Maor Vashamesh and adopted the notion from this earlier hassidic text. I have yet to find specific evidence indicating that the Ben Ish Hai read Maor Vashamesh. Nonetheless, the Ben Ish Hai was familiar with certain hassidic texts and with hassidic practice in general. The idea that is presented so lucidly in Maor Vashamesh appears elsewhere in texts associated with hassidism, and it is therefore possible that the Ben Ish Hai drew the idea from hassidism.A third possibility is that the Ben Ish Hai may have reached the idea without the agency of hassidism, thanks to his own extensive knowledge, learning, scholarship, and experience in the realm of Jewish mysticism.Whatever the explanation, it is apparent that “Hassidic Torah” is not a hermetically sealed category. “Hassidic” ideas – as beautiful and inspiring, or as lofty and esoteric as they may be – are not necessary the sole provenance of hassidism.The writer is on the faculty of Pardes Institute of Jewish Studies and is a rabbi in Tzur Hadassah. He is currently a post-doctoral fellow with the Inter-University Academic Partnership in Russian and Eastern European Studies.