Sources in the prime minister's office say PA president's words will be judged by the efforts made to secure return of teens; Abbas in Saudi Arabia says kidnappers ‘want to destroy us;’ Livni praises words. 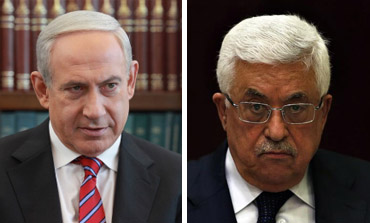 The Prime Minister’s Office reacted with much reserve and a great deal of skepticism Wednesday to Palestinian Authority President Mahmoud Abbas’s strong condemnation in Saudi Arabia of last week’s kidnappings of three Israeli teenagers.
Hamas (photo credit: REUTERS)
Hamas (photo credit: REUTERS)
Hamas (photo credit: REUTERS)
Sources in the PMO said that Abbas’s words – including his comment that those who carried out the abduction were harming the Palestinian cause – will be judged by the efforts the Palestinian Authority will make to secure the safe return of the youths – Naftali Fraenkel, Gil-Ad Shaer, and Eyal Yifrah – to their families.The true test of Abbas’s words, the sources said, will be whether or not he scuttles the unity pact with Hamas. Other officials in Jerusalem downplayed the significance of Abbas’s comments further by saying that they came after intense US pressure.Speaking at a meeting of the Islamic Cooperation Organization in Jeddah on Wednesday, Abbas said the PA security forces were assisting Israel in the search for the youths.“We are coordinating with them [Israel] to reach them,” Abbas said. “They are human beings and we care about the lives of human beings. The Americans informed us that one of them is an American citizen. We told them that we care about the lives of all human beings.”Abbas said that those behind the kidnapping “want to destroy us,” adding they would be held accountable for their deed regardless of their identity.Unlike the Prime Minister’s Office, Justice Minister Tzipi Livni, who led Israel’s negotiating team with the Palestinians during nine months of talks that ended unsuccessfully in April, was more charitable in her response to Abbas’s comments. Abbas’s words, she said, were “very important in our international struggle to get legitimacy for our actions.”These words were “important, correct, and reflect the true reality,” she said.“Hamas is an extreme Islamist terrorist organization that attacks civilians and children, and does not wage a war for the Palestinian people and their national aspirations, but rather against the existence of the state of Israel. It is forbidden to give them legitimacy,” she added.Livni said these are sentiments she continuously tells the world.“These are words the world needs to internalize, especially after they were voiced clearly by Abu Mazen [Abbas],” she said. “Israel, the world, and the moderates and pragmatists on the Palestinian and Arab side need to fight together against the terrorist Hamas, push it into a corner, isolate it, and in that way bring back the chance of returning to negotiations and the idea of two nation states.”During his speech, Abbas stressed that the kidnappings took place in Area C of the West Bank, where the PA has no authority, and accused Prime Minister Binyamin Netanyahu of using the kidnapping to crack down on Palestinians in the West Bank.Abbas defended continued security coordination between the PA and Israel, saying it is in the Palestinians’ interest to protect Palestinians and prevent a return to chaos, as was the case during the second intifada.“We don’t want to return to a situation that destroys us and we won’t allow this to happen,” Abbas stressed. He claimed that Israel and Hamas had also conducted security coordination during the rule of deposed Egyptian president Mohammed Morsi.Abbas said that the US and EU decided to support the Fatah- Hamas government after they heard that it would continue to conduct security coordination with Israel.He held the Israeli government responsible for the failure of the last round of US-sponsored peace talks, and said that the Israeli government halted the negotiations even though the Palestinians were ready to talk for another nine months.On the Palestinian side, Abbas’s remarks drew strong condemnations from Hamas and other Palestinian groups, including the Popular Front for the Liberation of Palestine [PFLP] and the Democratic Front for the Liberation of Palestine [DFLP].Hamas spokesman Sami Abu Zuhri slammed Abbas’s remarks as “harmful to Palestinian interests and reconciliation.”“Abbas’s remarks are in violation of the reconciliation agreement [with Hamas] and Palestinian national consensus,” Abu Zuhri said, adding that “they are also harmful to the thousands of Palestinian prisoners who are facing a slow death in occupation prisons.”Yahya al-Abadseh, a Hamas legislator in the Gaza Strip, accused Abbas of “crossing all red lines.”He also accused Abbas of turning his back on the “legacy” of the PLO and the Palestinian national liberation movement.“Abbas has placed himself in confrontation with the entire Palestinian people,” he said.PFLP official Kayed al-Ghoul told the Ramallah-based Wattan TV that Abbas’s “problem is that he wants to appease all parties at the expense of the feelings and interests of the Palestinians.”Ghoul also lashed out at security coordination with Israel, saying it only provides security for Israelis and was “never in the interest of the Palestinians.”DFLP official Talal Abu Zarifeh said that Abbas’s remarks were “unacceptable” and “harmful” to the Palestinian cause.