In Operation Protective Edge, IAF strikes homes belonging to Hamas members that have been used as command and control centers. 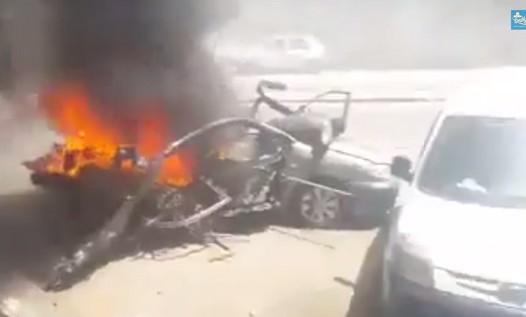 In recent air strikes on Gaza, all of the homes of Hamas brigade commanders have been destroyed, Israel Radio reported early on Wednesday.According to a report by the Palestinian news agency Ma'an, one of the homes targeted was that of senior Islamic Jihad terrorist Hafiz Mohammed Hamad. In the strike early on Tuesday, Hamad and five of his family members were reportedly killed.In a separate incident, a joint IDF-Shin Bet (Israel Security Agency) operation struck a vehicle containing a commander of Hamas's naval commando unit, Muhammad Sa'aban, aged 24, on Tuesday.Palestinian media reported that four Hamas people in total were killed in the targeted strike on the vehicle.

Sa'aban's commando unit operated in northern Gaza, security forces said. He was immediately killed in the strike. Sa'aban was a resident of Jabalia in Gaza.The strike came hours after the IDF launched Operation Protective Edge in an effort to quell increased rocket fire from Gaza into southern Israel in recent weeks.Later on Tuesday, the air force struck three homes in Gaza used by Hamas as command and control centers for enabling rocket fire against Israel. The homes belonged to Muhammad Sba'at, a senior member of Hamas's rocket launching formations in Beit Hanount, who was involved in several recent rocket attacks against Israel, Amin Ibrahim Al-Alba'an, a Hamas member, and Abu Jarad, a Hamas member from northern Gaza who has been engaged in terrorism against Israel.Palestinians said six people were killed and about 25 wounded in one of the houses attacked.Some 100 targets in Gaza have been struck by the IAF since the operation began, including homes used by Hamas and Islamic Jihad members, underground rocket launchers, underground attack tunnels, remote rocket launch infrastructure, training camps, and additional centers of terrorist activities.Since midnight Tuesday, some 30  rockets fired from the Gaza Strip have exploded in Israel.The Iron Dome anti-rocket system has intercepted six rockets.Palestinians say that a total of 24 people have been killed in IAF strikes since Operation Defensive Edge began.JPost.com Staff contributed to this report.