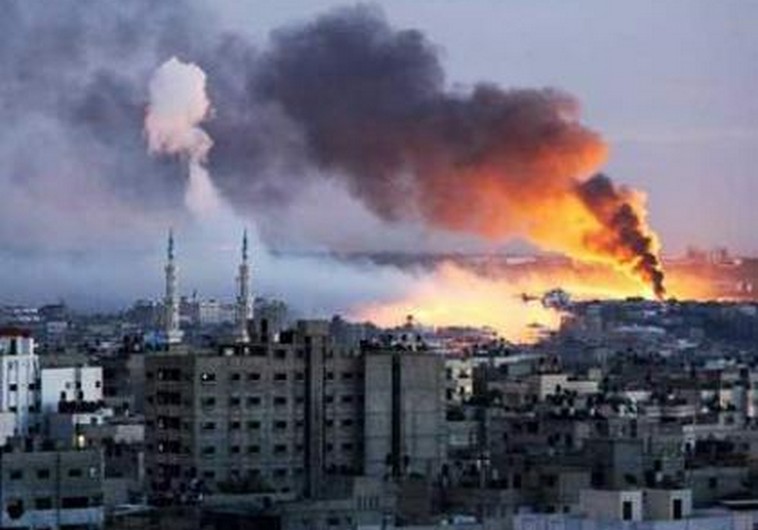 Prime Minister Binyamin Netanyahu and Defense Minister Moshe Ya'alon ordered a restart of the attacks on the Gaza Strip Tuesday afternoon after Israel's acceptance of an Egyptian-brokered ceasefire was met with a morning and afternoon of Hamas rockets fired at Israel.Diplomatic officials said that the IDF actions, which came at 3:00 pm, six hours after Israel held its fire and responded positively to the Egyptian cease-fire proposal, were the result of Hamas and Islamic Jihad rejecting the cease fire.IAF aircraft began striking targets on Tuesday afternoon following the decision. The IDF stated that it would strike all "elements that are behind terrorist attacks on Israel." Palestinians in the Gaza Strip claimed on Tuesday that they had been receiving text messages and pre-recorded phone calls from the IDF that blame Hamas for the renewal of Israeli strikes following Hamas's rejection of the ceasefire.  Netanyahu had earlier warned that Israel would widen its offensive in Gaza if the rocket attacks continued. Netanyahu, speaking at the beginning of a meeting in Tel Aviv with German Foreign Minister Frank-Walter Steinmeier, said that Israel “agreed to the Egyptian proposal in order to give an opportunity for the demilitarization of the Strip - from missiles, from rockets and from tunnels - through diplomatic means." The prime minister said that the purpose of Operation Protective Edge was and remains to return quiet to Israel's citizens while delivering a severe blow to Hamas and other terrorist organizations. He said that Israel succeeded in hitting the terrorist organizations in Gaza very hard, and prevented their efforts to attack Israeli citizens.US Secretary of State John Kerry blamed Hamas for powering through the ceasefire."I cannot condemn strongly enough the actions of Hamas in so brazenly firing rockets in multiple numbers in the face of a goodwill effort to offer a ceasefire, in which Egypt and Israel worked together, that the international community strongly supports," Kerry told reporters in Vienna on Tuesday morning.
Michael Wilner and Jpost.com Staff contributed to this report.