Diana Magnay, the network correspondent, tweeted afterward that the group of Israelis were "scum" for threatening her not to air reactions.

By JPOST.COM STAFF
JULY 18, 2014 16:09
CNN correspondent Diana Magnay reporting on the IDF offensive in Gaza.
(photo credit: YOUTUBE SCREENSHOT)
Advertisement
A  CNN correspondent who reported that Israelis cheered the military offensive against the Hamas-ruled Gaza Strip denounced them as "scum" after she claimed on her Twitter feed that she was threatened in the event that she aired their reaction on television.Diana Magnay, who is in Israel to report on the latest developments along the Gaza frontier, observed on camera how a group of Israeli gathered near Sderot applauded as the IDF rained missiles down on the Gaza Strip.In a subsequent post on her Twitter feet, she noted that she was threatened by some of the Israelis who warned her not to air footage of their reaction lest her car be "destroyed." 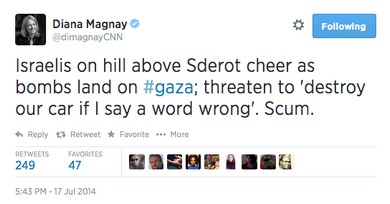 She angrily referred to the group as "scum" before the tweet was deleted from her account altogether.