After Obama, Israel should move closer to Moscow 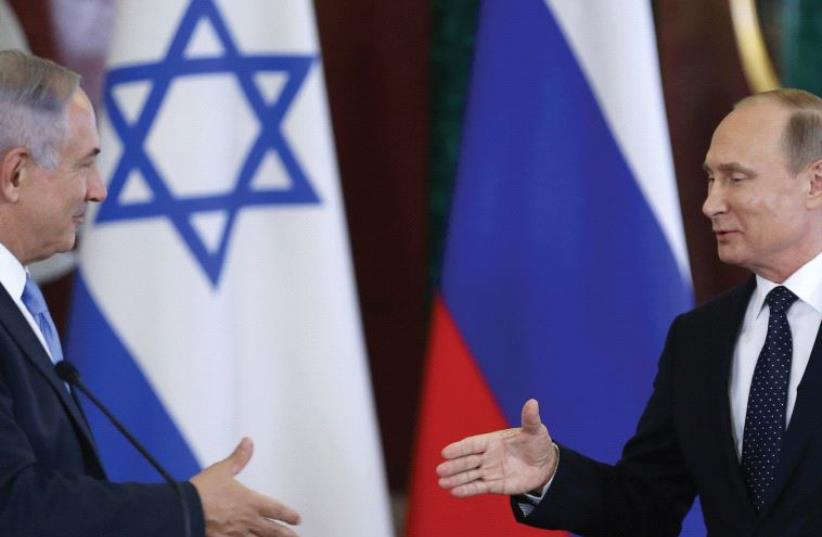 RUSSIAN PRESIDENT Vladimir Putin shakes hands with Prime Minister Benjamin Netanyahu during a news conference at the Kremlin in Moscow
(photo credit: REUTERS)
Advertisement
After eight years of US President Barack Obama, and the recent shenanigans at the United Nations by America’s first Dear Leader, Israel should be thinking with friends like this, who needs enemies. In addition, Europe seems to no longer be Israel’s ally. The one lesson that should be learned by the Jewish state from this presidency is that America cannot be trusted, that is when a leftist Democrat is in office. The Jewish, American Left cannot be trusted. If America elects another globalist, who puts the interests of the elite in front of the American people’s, America will not stand by its friends, in other words those who value freedom and democracy. The one thing Israel should learn from the Syrian civil war is that Russia does take care of its allies, no matter the cost in public opinion or civilian lives.Israel is unlike any other nation state on the planet, except for maybe Taiwan. Israel cannot defend itself forever in the face of an overwhelming, determined force. It has to depend on its allies for support and protection if ganged up on by the Arab world. It is a tiny country, with not many natural resources or geographic barriers to entry. Yes, it reportedly has nuclear weapons, but soon so shall Iran and possibly Saudi Arabia, thanks to Obama and his senior adviser, Iranian-born Valerie Jarrett. Iran is rapidly developing its ballistic missile capability, again thanks to Obama. At some point, the real Islamic state, the Islamic Republic of Iran, may feel bold enough to launch a first strike in pursuit of its often stated goal of destroying the Jewish state. Iran possibly may feel it can ride out any retaliatory strike.Yes, Israel needs friends, friends it can count on. With Obama in the White House, it doesn’t have a friend in America. I’ve often said you cannot listen to what Obama says, you have to look at his actions and their results. These include the removal of American forces from the Middle East; an Islamic caliphate arising in the Middle East; a Russian/ Shi’ite axis of power in control of the Middle East; Israel’s arch enemy, Iran, acquiring nuclear weapons and retooling its conventional forces with arms purchases from Moscow with the cash released under the Iran appeasement “deal”; and the United Nations passing devastating resolutions against Israel, one of which declares the Temple Mount exclusively Islamic.So where does Israel find someone that can help guarantee its security if America one day again follows the agenda of the Left? No matter how devastated American Marxist globalists are after the 2016 election cycle, the pendulum eventually swings back the other way. Elections have consequences. It may take a couple decades, but it is possible that America may return the America-hating, freedom-hating, duplicitous, organized crime, payfor- play, parasitic Democratic Party to power. To further its security in the future, Israel should develop a stronger relationship with the new sheriff in the Levant and the Fertile Crescent: the Russian Federation.Prime Minister Benjamin Netanyahu obviously recognized this necessity following the Russian expeditionary force entering Latakia, Syria. He promptly flew to Moscow to confer with Russian President Vladimir Putin and deconflict Israeli and Russian air operations in Syria. Israel seems to have secured from Putin permission to continue to destroy Syrian air defense systems that threaten the Golan Heights or other Israeli. Israel has struck several Hezbollah and Syria positions since Netanyahu’s trip to Moscow.The Russian and Israeli air forces seem to be operating successfully in close proximity. Of course Russia did bomb targets near American special forces positions in Syria, on purpose I believe, to show Obama who was boss. And Obama did nothing.But eventually Israel may need more than the freedom to execute pinprick operations in Syria. It may need protection from a powerful entity if seriously threatened by Iran, or its proxy armies in Lebanon, Syria and Iraq. Israel may someday be overwhelmed if Saudi Arabia goes nuclear as well as Tehran. If there is an Alinskyite again in the White House, Israel will need another friend, even if it is one that does not share its democratic ideals or view of the world. At that point, Israel will have to settle for pragmatism and that means finding a way to deal with Russia.Israel does not have the luxury of seeing the world as it wants to see it, unlike the Obama administration of the elites in Europe as their women are raped and their culture destroyed. Israel cannot call Islamist violence “workplace violence” and be done with it. It cannot call terrorist attacks “man-made disasters” and ignore them. Israel, more than anyone, has to deal in reality, in what will strengthen its security, as the alternative is death and destruction.After the recent UN Security Council resolution against Israel that US Secretary of State John Kerry and Obama orchestrated, Israel can no longer trust slightly less than half of America. It has gotten that bad.Far too many American Jews would have no problem with Israel being destroyed, just as they would have no problem with America being destroyed.Many say that the world is no longer in a struggle between communism and capitalism, but instead in a fight to the death between globalism, that feeds the elites, and nationalism, which protects the people. Israel may need to start seeing the world more in this light and move closer to Moscow; after all, there are a lot of Jews in Russia.L. Todd Wood, a graduate of the US Air Force Academy, flew special operations helicopters supporting SEAL Team 6, and Delta Force. After leaving the military, he pursued his other passion, finance, spending 18 years on Wall Street trading emerging market debt, and later, writing. The first of his many thrillers is "Currency."

Tags obama in israel
Advertisement
Subscribe for our daily newsletter