“Most of those killed were shot while attacking Israelis or suspected of intending an attack.” 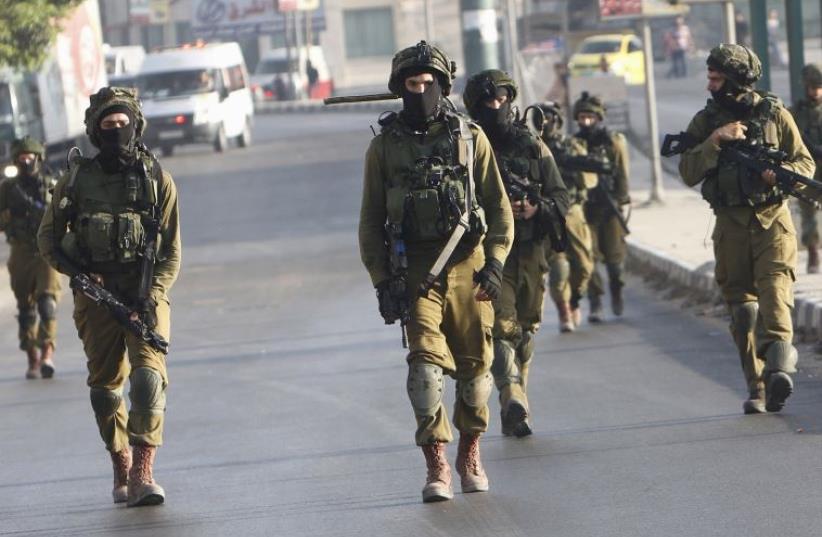 IDF soldiers in the West Bank [File]
(photo credit: REUTERS)
Advertisement
Amnesty International is the most powerful global organization claiming to promote human rights, measured in terms of annual budget, staff size and influence among journalists and government officials. However, it is also very troubled – it has declining support and is riven by internal conflict, and it depends on “activists” who lack research and other vital professional skills.The publicity the NGO’s reports still get is based more on its large budget for public relations than on any ability to assess human rights in a credible manner.Amnesty’s 2016/17 annual report, released with great fanfare (if little substance) earlier this week, illustrates these failures.The document is marketed to friendly “selected journalists” in press briefings, with embargoed copies that produce instant headlines, without independent analysis and fact-checking. By manipulating the media coverage instead of providing open access to journalists who might ask serious questions and check the claims independently, Amnesty is no different than other political groups that seek to control and manipulate the flow of information.The document leads with empty slogans, like: “It is time we all stand up together and put a stop to the politics of demonization which is creating a divided and dangerous world.” Without recognizing the irony, Amnesty contributes to this demonization, including employees tainted with antisemitism and the blatant refusal to add research on antisemitism to its agenda.The chapter on “Israel and the OPT” in the 2016/7 report continues this pattern.Legal terms used to vilify the IDF, such as “excessive force,” and “harsh sentences” for ostensibly “minor offenses” are undefined, without sources or evidence. The old memes of “collective punishment” in the Gaza Strip and the terrorist-run “humanitarian aid ship Mavi Marmara” are trotted out yet again.Blanket allegations that Israel “failed to ensure accountability... for the extensive war crimes and other grave violations of international law that Israeli forces committed during recent armed conflicts in Gaza and Lebanon” are recycled and stripped of context (terrorism). As demonstrated repeatedly, they lack validity.Similarly, there is no evidence or context in the allegations of “unlawful killings, torture and other violations that Israeli soldiers and security officials continued to commit.” The claim that the IDF, police and Ministry of Justice “did not investigate, failed to investigate adequately, or closed investigations into cases of alleged unlawful killings of Palestinians by Israeli forces in both Israel and the OPT” ignores long-standing procedures for review in both the Israeli military and civilian justice systems.There is no mention of the derailed reviews conducted by the Turkel Commission, the numerous cases examined and reported regarding the 2014 Gaza war, and the detailed documentation released by the IDF and the government regarding the reviews.Regarding responses to the wave of Palestinian knife and shooting attacks, Amnesty acknowledges: “Most of those killed were shot while attacking Israelis or suspected of intending an attack.” (Consistent with the activist emphasis, the word “terror” is not in Amnesty’s vocabulary.) The accusation that “Some [of the suspected attackers], including children, were shot when they were posing no immediate threat to others’ lives and appeared to be victims of unlawful killings” appears entirely without the evidence that is expected to accompany such claims.The political agenda is also echoed in the brief comment on “violence against women... particularly within Palestinian communities in Israel.”Repeating the long-established Amnesty practice of erasing the culture of domestic violence and honor killings, the Israeli police are blamed for allegedly not providing “adequate protection.”Then there is Amnesty’s mimicking of the empty slogans of its NGO allies. Grossly overstating the importance and impact of the 2016 NGO Transparency Law, and reflecting the hysteria from Israeli NGOs such as Breaking the Silence and B’Tselem, Amnesty expresses “deep concern” over a marginal bill.Similarly, repeating the claims of NGOs (with alleged links to the PFLP terrorist group!) such as Defense for Children-Palestine and Addameer, Amnesty alleges that “Israeli soldiers, police and Israel Security Agency (ISA ) officers subjected Palestinian detainees, including children, to torture and other ill-treatment with impunity.” Once again, there is no evidence or verification, and the systemic changes undertaken by Israel to further protect detainees, including children, above and beyond the requirements of international law are ignored.The principle of universal human rights is not served by stringing together a series of ideological slogans, unsupported accusations and blanket allegations that turn every counterterrorism action into a war crime. Amnesty would do better by carefully examining its own behavior and contributions to the terrible state of human rights in the world today.The writer is president of NGO Monitor and a professor of political studies at Bar-Ilan University.