If I were to council Trump, I would tell him to stop claiming that the media is making up the news, but explain to the public that his beef with news organizations is their slanted reporting. 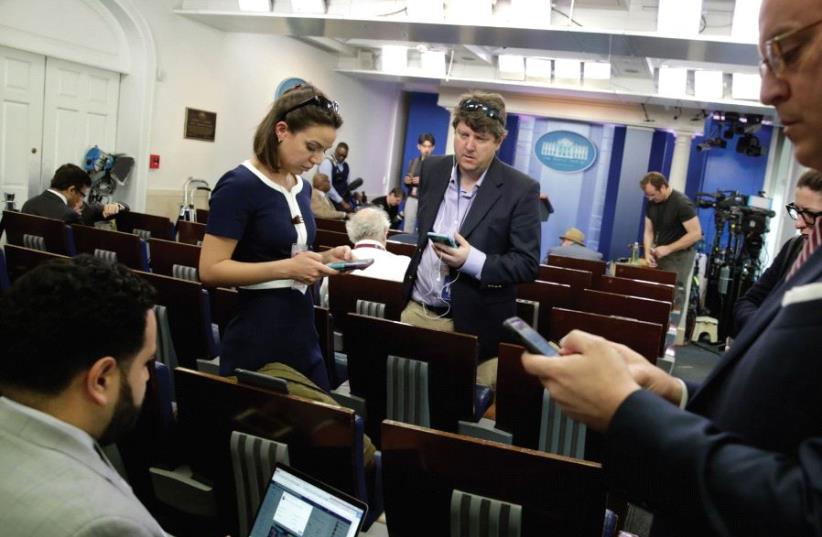 ‘No Israeli prime minister or American president has ever had easy dealings with the press. That is why Trump’s charges of fake news remain credible to many of his supporters'
(photo credit: REUTERS)
Advertisement
A few years ago, I asked an editorial writer at Haaretz if he was troubled by accusations that his paper editorialized news stories to fit its agenda. His response was, “If you don’t like it, read another paper.”A recent New York Times front page news story on media bias read, “Biased? Probably. Oppositional? Maybe. Essential? In theory, but the enemy? Not so much.” It should be no surprise to any informed consumer of news that media outlets practice activist journalism, commingling opinion and fact.Most of the uproar regarding media bias is in response to the attacks by US President Donald Trump on an activist media. The president has referred to editorialized news as “fake news,” the media as the “opposition party” and the press as the “enemy of the American people.”None of this is healthy for any democratic political system. Presidential or executive credibility is essential for a functioning democracy, and this type of rhetoric can undermine the public trust.Transparency is essential for the media’s role as a watchdog for a democracy’s citizenry, but an agenda-driven media in both Israel and the United States perpetrates a fraud on the public.An activist, agenda-driven press, or editorialized news passed off as straight news, deserves condemnation, but Trump’s calling it “fake” confuses the public, some of whom, especially those who already don’t like him much, will think he is denying facts.Let’s be clear: presidents, prime ministers, their administrations as well as their political adversaries all cherry-pick facts to embarrass their opponents. But this has gotten much worse in both Israel and America.Activist media assertions have been front and center in the US regarding many issues, none more contentious than the Israeli-Palestinian conflict. Organizations like CAMERA, Palestinian Media Watch (PMW), NGO Monitor, MEMRI, Accuracy in Media and Honest Reporting have been created to make the public aware that many mainstream news organizations too often present facts out of context to advance what they consider a politically correct agenda.Contempt and lack of civil respect for contrary opinions oozes from the columns and editorials of the New York Times, with far too many ad hominem attacks. The Times created its ombudsman position in part in response to cancellations of subscriptions due to its anti-Israel bias, disproportionately focusing on alleged Israeli transgressions while ignoring far more egregious stories in the Middle East and the world.So which is more dangerous, editorialized news that is technically correct in some sense but is meant to fool the public, or truly fake news that has no or little factual content? Sometimes the bias is insidious, as in article placement, censorship by omission of information that contradicts an agenda, burying a countervailing viewpoint at the end of the piece where few readers will venture, or choosing someone who sounds not worthy of respect to present the opposing side.I have interviewed some leading editors who have told me that if you are perceived to have a view not matching the agenda of the media outlet, you will be marginalized.The press’s prejudice and influence is not just in the international arena, but has infected even the American judicial system.Judge Lawrence Silverman, a senior judge on the US Circuit Court of Appeals, wrote in The Wall Street Journal that “the press’s orientation is sympathetic to activist results, which I think it is safe to say are largely on the left,” causing some justices not to be blind in rendering a decision.A Supreme Court influenced by an activist press – is that good for democracy?Which brings us back to fake news. Does the American or Israeli press present false news? The answer, overwhelmingly, is no. If they did, it would be much easier to deal with, as illegitimate facts are much easier to discredit than opinionated news bias cleverly concealed by biased journalists.No Israeli prime minister or American president has ever had easy dealings with the press. That is why Trump’s charges of fake news remain credible to many of his supporters. If I were to council Trump, I would tell him to stop claiming that the media is making up the news, but explain to the public that his beef with news organizations is their slanted reporting.There is no doubt that president Barack Obama received much less scrutiny than either president George W. Bush or Trump because of the media’s affinity for Obama’s agenda, but the Trump administration needs to have a tougher skin when it comes under legitimate criticism for policy differences.Israeli media is less apologetic in its bias. At a meeting I had with a leading Israeli journalist a couple of years ago she referred to her paper as the anti-Netanyahu paper.Donald Trump and Prime Minister Benjamin Netanyahu will be in the history books in a few years, but the biased media will still be with us.The lesson for the American and Israeli people to learn is that an independent press is vital to their democracies, even when it presents uncomfortable truths. But they need to wake up and realize that their news sources are far too biased, and that they need to demand an end to editorialized news, as well as an end to demonization of the press.The author is founder and director of MEPIN, the Middle East Political and Information Network. He regularly briefs members of Congress and think tanks on the Middle East.