Behind every ZAKA volunteer is a traumatized wife

At ZAKA, we provide professional psychological counseling for both the volunteers and their wives. 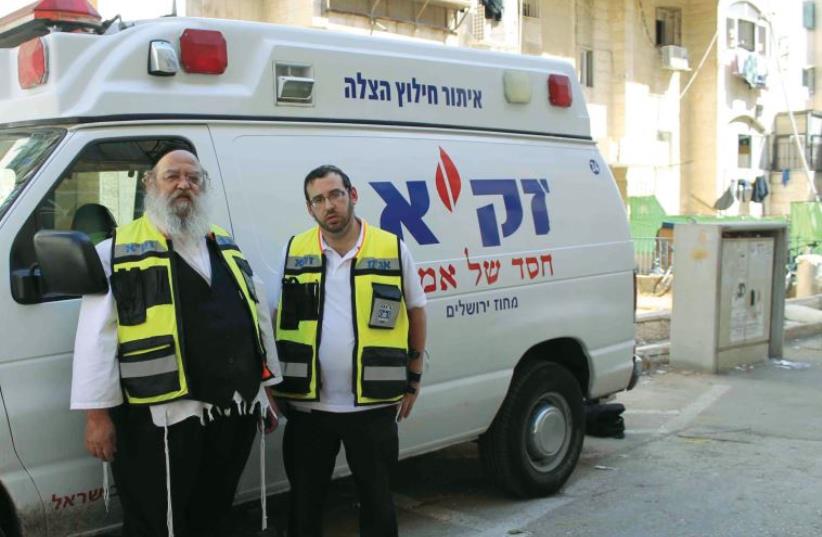 Zaka first responders Yossi Frankel (right) and Benzi Oring pose in front of one of the organization’s emergency vehicles
(photo credit: SAM SOKOL)
Advertisement
I am often asked how the ZAKA volunteers, especially the young husbands and fathers among them, cope with the daily trauma of their sacred mission. How can they deal with the grisly aftermath of terrorist attacks, car accidents and suicides, ensuring a proper burial in accordance with Jewish law – and then go back to their normal lives? And what about the effect this has on their wives and families? The unpredictability of every day, never knowing when that ZAKA beeper will go off, and the certain knowledge that wherever they are, their husbands will drop everything to answer the emergency call.As someone who feels a heavy, almost paternal responsibility for the welfare and mental health of the ZAKA volunteers and their families, I feel its weight on my shoulders to the point that it often keeps me awake at nights.At ZAKA, we provide professional psychological counseling for both the volunteers and their wives.Sadly, over the years, experience has taught us the need for swift and professional debriefing for everyone affected by the gruesome aftermath of terrorism and unnatural death.But it was only at a recent workshop for the wives of ZAKA volunteers in the Jerusalem and surrounding regions who have suffered the most during these last three months of terrorism, that we realized it is no longer sufficient in these encounters to provide the ZAKA wife just with the professional tools to support and encourage her husband. To our shock and sorrow, we understood the depth and severity of the wives’ trauma, with their constant exposure to the trauma of terrorism from the eyewitness accounts that their husbands bring with them into the home on an almost daily basis.At the workshop, the volunteers’ wives talked about the difficult and depressive atmosphere that seeps into the home after their husbands’ return from dealing with a difficult incident. How the misery envelops everything, and no one is allowed to be happy or listen to music or other joyful things. How they even have difficulty connecting with their children.According to R. W., wife of one of the young volunteers: “My husband and I are 23. We have been married for around three years and have two small children. My husband has been volunteering as a ZAKA Rapid Rescue Motorcycle rider for around three years. We were a young couple full of joie de vivre, with our whole lives ahead of us. But lately a depressive, melancholy atmosphere has pervaded our home. It is as if we have suddenly aged 50 years.“So far, during the last three months alone, my husband has treated the injured and dead at over 20 terrible terror attacks, and this is in addition to the “routine” calls. He comes home extremely despondent after these attacks. He is no longer a happy person. Sometimes he has trouble falling asleep at night. And he finds it really important that I listen to what happened to him, so he tells me about the terrible incident where he treated people, and so I’m also sucked into the harsh and heavy atmosphere.“I have no doubt that my husband is doing holy work and a great mitzva, but who knows how this will affect him in the future? Is he allowed to pay such a heavy price?” ZAKA continues to learn, adapt and change with time and experience.A team of professional psychologists has guided us over the years, protecting volunteers by means that include the use of unique methods and ideas. This has been successful to the point that delegations frequently visit our offices from around the world to see how ZAKA volunteers exposed to so much bereavement, misery and tragedy can continue. Psychologists have been amazed by the phenomenon of the ZAKA volunteers and their remarkable resilience.Psychologists often treat people who were exposed to a single traumatic incident. In contrast, the ZAKA volunteers are exposed to hundreds of the most traumatic and terrible incidents imaginable and yet they continue to function.In a recent international psychologists’ conference held in Israel, one of the sessions was entitled “What is the Genetic Code of ZAKA Volunteers?” During this session, the greatest experts attempted to crack the code. The researchers concluded that it was their unshakable faith that drove the ZAKA volunteers and that, without it, they would not be able to continue functioning.The researchers also noted that volunteering and a sense of mission have become addictive for ZAKA volunteers – an addiction to doing true deeds of kindness (hesed shel emet), often under the most terrible conditions.The very nature of their work exposes ZAKA volunteers, more than any other body or organization, to terrible scenes and places that few people are able to cope with. The tremendous mental capabilities that the volunteers demand of themselves cannot be learned in any course. The inner recognition of the importance of their work is what allows them to continue carrying out the hardest of all tasks – despite everything.Typically, ZAKA volunteers deal with an average of 30 incidents of unnatural death every week, but during the current wave of terrorism that number has dramatically increased. To date, ZAKA volunteers have dealt with more than 160 unnatural deaths, of whom 29 were terrorism victims and over 140 were the murderous terrorists.On the streets and in my office, I meet these brave young volunteers; many seem almost like children.And each tells me in turn how many dozens of bodies he has dealt with during these past three months.And this shocks me to the point of fear for having such great responsibility.All these experiences, images, the terrible scenes, they take home and share with their wives.We will continue our mission, while at the same time doing all we can to find the necessary resources and a special budget to maintain the mental health of not just our dedicated volunteers, but also their loyal wives who stand behind