Into the Fray: The ruinous results of restraint

Israel can no longer enable its citizens to “live normal lives” without retaking Gaza. “Restraint” and “proportionality” have so degraded its deterrence that it can no longer dissuade enemies from attacking almost at will. 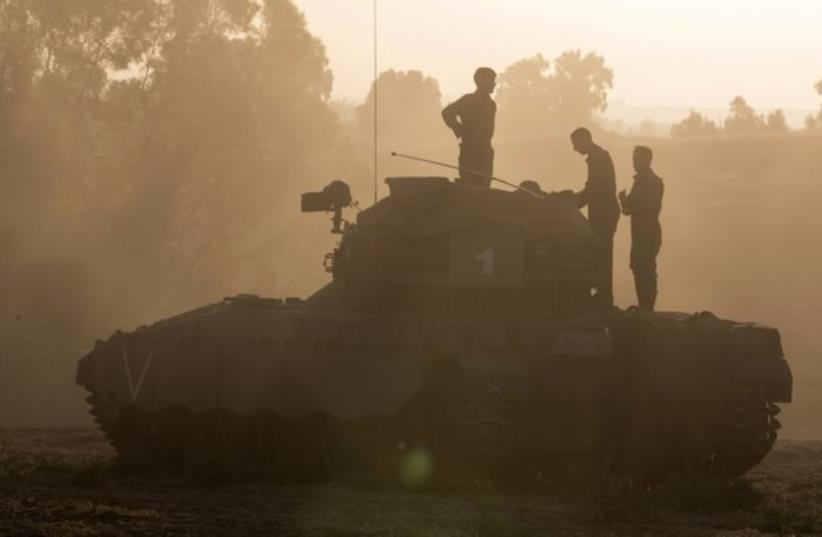 Israeli soldiers stand atop an APC outside the central Gaza Strip
(photo credit: REUTERS)
Advertisement
The ultimate test of this agreement will be a test of blood. If it becomes clear that [Palestinians] cannot overcome terror, this will be a temporary accord and... we will have no choice but to abrogate it. And if there is no choice, the IDF will return to the places it is about to leave in the upcoming months.

– Yossi Beilin on the Oslo Accords Everything is reversible.

– Yitzhak Rabin on the Oslo Accords Truth be told, I found it difficult to write my column this week. I spent hours staring at my laptop’s keyboard, unable to compose a single sentence, feeling waves of anger, frustration and disbelief wash over me as the news of the bombardment of the country came streaming through the television set beside me.

Depressing déjà vu It was not that there was a dearth of topics to write about. There was a surplus of issues that could be subject matter for a column relating to the events of the last few days.For example: • The “original sin” of Oslo, that made the perverse – and previously scorned – notion of Palestinian statehood the center-piece of Israeli policy, which opened the flood gates of terror across the country, and eventually precipitated the current situation in Gaza; • The continuous poor judgment by the Israeli leadership over the last two decades as to developments in Gaza and how they should be dealt with; • The debilitating distortions and ridiculous restrictions imposed on the formulation and conduct of Israeli policy regarding Gaza by the diktats of political correctness; • The imbecilic idea of abandoning Gaza unilaterally, thus providing the Palestinian- Arab terror organizations a territorial platform in which they could plan operations and prepare infrastructure, and from which they could launch countless attacks against Israeli civilian population centers.• The ineffectual, albeit pyrotechnically spectacular, methods adopted by the IDF to deal with these attacks and destroy the infrastructures that facilitate them, which have allowed the terror organizations to develop operational capabilities that would have been inconceivable only a few years ago.Yes, I could have written on any one of these topics – but every time I set out to put pen to paper (or rather fingers to keyboard), I realized that I had already written about it, in some detail, in the past – and a depressing sense of déjà vu descended upon me, sapping any will to explain the obvious and warn of the inevitable once again.