Honoring the murderers in Lithuania

Indeed, Zenonas Ignatavicius was quite an exceptional person, but not in the manner quoted above or in the speeches which lauded him. 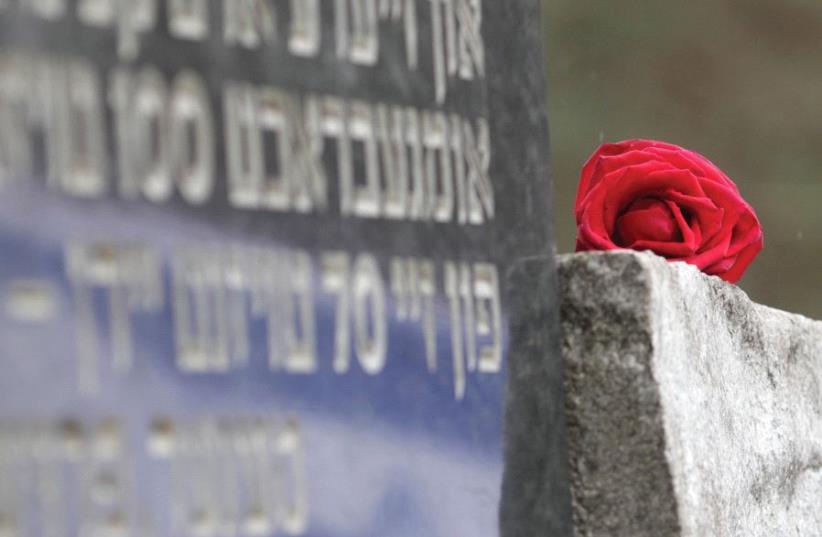 A RED ROSE is pictured during the March of the Living to honor Holocaust victims in Paneriai, near Vilnius, Lithuania, in 2012.
(photo credit: REUTERS)
Advertisement
Several weeks ago, a memorial plaque was unveiled in the small Lithuanian town of Vilkija, about 30 kilometers from Kaunas (Kovno). It honors a man who served as a chaplain to a police unit that was sent to Belarus in the fall of 1941 to assist the Germans in “cleansing the area of the enemies of the Reich.” Among the platitudes produced in the wake of the ceremony was the following description by Egidijus Saulius Juodis on the significance of the role played by the priest and his dedication to his task:
“In previous times, people were more religious. Therefore, for the majority of the soldiers and other people, life after death was not an empty phrase, especially when death was doing its nasty work every day around them. They needed consolation and spiritual encouragement, a good word and rituals performed by the priest. Zenonas Ignatavicius gave up a comfortable position in the Kaunas seminary, [and] left for starving and dangerous Belarus. Apparently he was an exceptional human being.”
Indeed, Zenonas Ignatavicius was quite an exceptional person, but not in the manner quoted above or in the speeches which lauded him at the dedication of the plaque in his honor. In fact, his was far from an innocent assignment. On the contrary, the unit he served, the 2nd Lithuanian Auxiliary Police Battalion, later renamed the 12nd LAPB, was a Lithuanian death squad that murdered at least 20,000 Belarusian Jews during the years 1941-1942, and was one of the most lethal Baltic police units which operated during the Holocaust. Ignatavicius, moreover, was almost certainly aware of the nature of the operations carried out by the unit, which set out from Kaunas to Minsk on October 6, 1941, since he arrived to fill his post right before Christmas 1941. By that time, the unit had carried out numerous mass murders in Minsk, Koidanov, Rudensk, Dukara, Kletzk, Nesvizh, and most notoriously in Slutzk. In that town, in late October 1941, approximately 6,000 Jews were murdered by the men of German Police Battalion 11, and especially the 12th LAPB, in such a brutal manner that the local German administrator, Carl, protested to his superior in Minsk, begging him to make sure that the battalion would never return to Slutzk again.
IT IS not clear what impact the arrival in Minsk in late December 1941 of Father Ignatavicius had on the men of the 12th LAPB. Did the fact that they were able to celebrate Christmas more “normally” inspire any soul-searching on their part? Apparently not. In postwar prosecution files, there is mention of attending church in Minsk on Sundays and of Ignatavicius taking their confession as a group (not individually, as is the custom). Nowhere is there any indication of his expressing any disapproval of their activities, which continued apace after his arrival. Nowhere is there any mention of any empathy on his part for the innocent victims murdered by “his” men.
So why should Zenonas Ignatavicius be honored at all? In this case, the initiative for the plaque came from the Lithuanian Rifleman’s Union (Lietuvos Sauliu Sajunga), a group comprised mostly of army veterans and which existed in Lithuania before World War II. The group is notorious for the participation of its members in the arrest and murder of Jews during the Holocaust. Such people did not view these murders as war crimes or genocide, but rather as a patriotic response to the Soviet occupation and supposed betrayal of Lithuania by its Jewish residents. As one of the speakers, Kestutis Merkevicius said at the ceremony: “Prelate Z. Ignatavicius, through his belief and actions, brought fame to Lithuania and was fighting for his country.”
As outrageous as this ceremony was, it was further tarnished by the presence of Lithuanian soldiers especially brought to honor the memory of Ignatavicius, and ostensibly learn to emulate his supposed good deeds. In the past, Lithuania has aroused Jewish ire by honoring leaders of their post-World War II resistance against the Soviets who had participated in the persecution and murder of Jews during the Holocaust. This is the first case in which an accomplice to the murders is being honored who had no role in the fight against the Soviets. In other words, morally and emotionally assisting those mass murdering Jews is now enough to be named a hero in Lithuania in 2019.
The writer is chief Nazi-hunter of the Simon Wiesenthal Center and director of its Israel office and Eastern European affairs. The English language edition of his most recent book, written with Ruta Vanagaite, Our People; Discovering Lithuania’s Hidden Holocaust, will be published in February 2020. He can be found on Twitter @EZuroff, operationlastchance.org and wiesenthal.com.