Perhaps a key to reducing tensions in the region would be a campaign of public Koran study that features Islam’s tolerance for Jews. 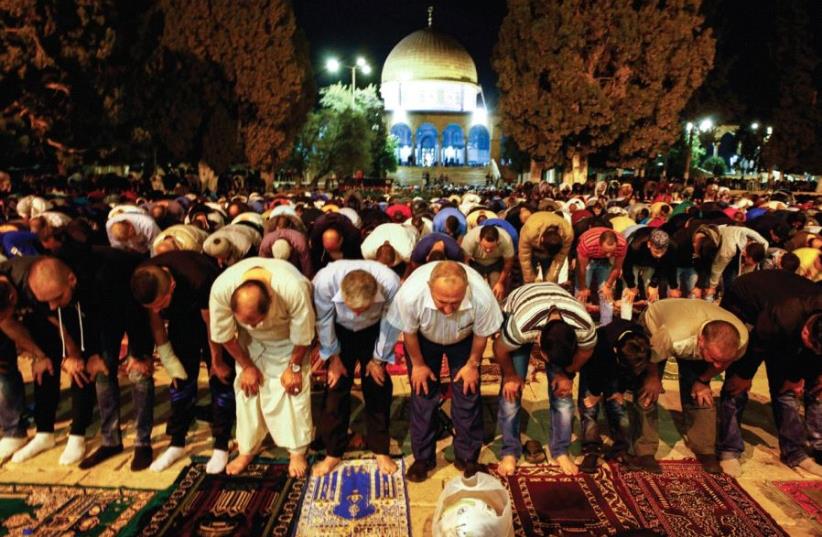 WORSHIPERS PERFORM Taraweeh prayers at al-Aksa Mosque in Jerusalem’s Old City earlier this week.
(photo credit: SLIMAN KHADER/FLASH90)
Advertisement
Palestinian Authority President Mahmoud Abbas declared on Monday that the Palestinians will seek full membership in the United Nations, in defiance of US President Donald Trump’s injection of reality into the peace process.Abbas’s grand rhetoric before meeting with senior Palestinian leaders in Ramallah was full of all-too-familiar bluster. “The US has chosen not to be a mediator for the peace process. We reject it as mediator. The US is with Israel and supports and backs it,” he blasted.Abbas said the PA would join 22 international organizations in response to US recognition of Jerusalem as the capital of Israel. This is nothing new, unlike Abbas’s departure from reality that followed: “There are no borders to Israel, and international law is against any recognition of it,” he said. “But they deceived the General Assembly by saying they would implement [General Assembly] Resolutions 181 and 194,” the former providing for the partition of Palestine and the latter the return of Palestine refugees. “Until today they have not implemented them.”At 82, Abbas has not tired of repeating the mantra of the “Nakba,” the Palestinian term for the disaster of the creation of the State of Israel. It is tedious to have to remind Palestinian nationalists that the United Nations created two states for two peoples, Arabs and Jews, on November 29, 1947, a decision the Jews honored and the Arab world destroyed by war.This folly continues seven decades later, still in vain. As former US president Barack Obama observed, “For the Palestinians, efforts to delegitimize Israel will end in failure. Symbolic actions to isolate Israel at the United Nations in September won’t create an independent state. Palestinian leaders will not achieve peace or prosperity if Hamas insists on a path of terror and rejection. And Palestinians will never realize their independence by denying the right of Israel to exist.”Abbas must now confront the new reality that the US is not going to deliver Israeli concessions for a Palestinian state with east Jerusalem as its capital.This is unlikely to happen unless he can come up with a new agenda.In doing so, he would be well to note some small winds of change blowing in from the east. Despite the uproar Trump’s decision caused throughout the Arab world, Muslim scholars have recently come out with religious interpretations that favor Israel; indeed, support its existence.Abdulhameed Hakeem, head of the Middle East Center for Strategic and Legal Studies in Jedda, told US-based Alhurra television that Trump’s move constitutes a “positive shock to the peace process. We must recognize and realize that Jerusalem is a religious symbol to Jews and sacred to them, as Mecca and Medina are to Muslims.”Hakeem considers Iran a threat to both Israel and Saudi Arabia.He stresses that the “Arab mind must liberate itself from the legacy of [former Egyptian president] Gamal Abdul-Nasser, and the legacy of both the Sunni and Shi’a sects, which has instilled for political interests the culture of Jew-hatred and denial of their historic right in the region.”Last week, a delegation from Bahrain made the first such visit to Jerusalem as guests of the Simon Wiesenthal Center, which is taking a group of Israeli businessmen to the Gulf kingdom next month.Perhaps a key to reducing tensions in the region would be a campaign of public Koran study that features Islam’s tolerance for Jews and even support for Israel like Sura 17:104: “And we said to the Children of Israel afterwards, ‘Scatter and live all over the world... and when the end of the world is near we will gather you again into the Promised Land.”While it may be taken as a given that the end of the world is not near, even Mahmoud Abbas must admit that the Zionists have fulfilled the prophecy.