It cannot be reformed. It’s time to create alternative bodies. 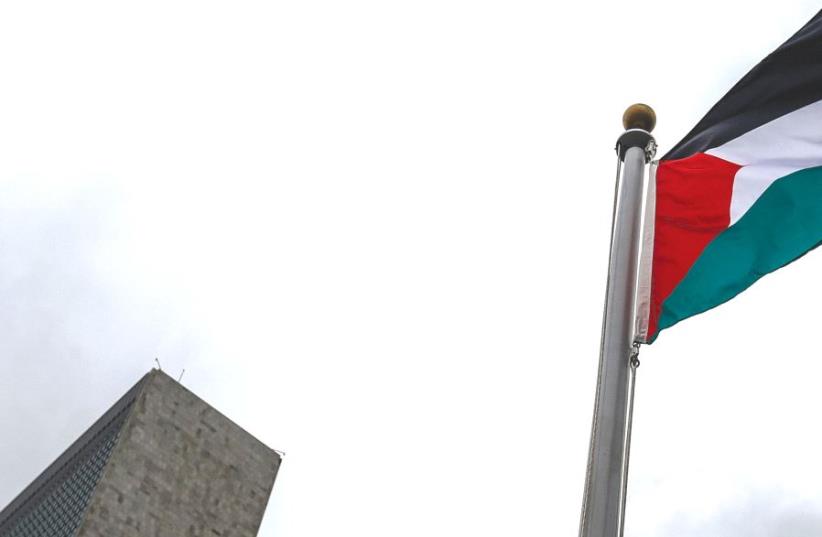 THE PALESTINIAN flag flies next to UN Headquarters in New York
(photo credit: REUTERS)
The United Nations, for all its flowery promises, was designed with appalling flaws from the start.The UN operates with no real accountability, no functional moral compass, and no mechanism for acquiring any such vital features. It has a tyrant-friendly, diplomatically immune and collectively irresponsible DNA.This leads almost inevitably to the UN’s bigotry, waste and abuse of its lavish funding, and ever-expanding mandates.Although everybody knows that the UN is broken, it’s pretty much taboo to call for its shutdown. The usual defense of the UN is that “it may be imperfect,” but “it’s all we’ve got” – a refrain that tends to be accompanied by prescriptions for reforms that either won’t stick, or won’t work at all.The counter-argument is this: Is the UN really the best we can do? Do we have to settle for a system that elects Syria, Saudi Arabia and Iran to lead human rights councils, women’s rights agencies, and cultural bodies? If the UN is “all we’ve got,” and it can cavalierly disregard the ongoing slaughter in Syria and outrageously brand Israel a war criminal enterprise, then it is way past time to come up with something else.The Trump administration is breaking new ground by talking about a 50% cut in the $10 billion in American funding for UN programs. But neither Trump administration officials nor any serious think tank has offered concrete suggestions how to fix the organization or replace it. It is time to do so.Edwin Black, the investigative author of IBM and the Holocaust, is leading an effort to replace the UN with a new world body called the Covenant of Democratic Nations.A prime mission of the proposed UN-successor entity, limited to nations governed by democratic principles, would be to nullify crazy acts and nasty resolutions of the UN and its agencies – such as UNESCO’s denial of Jewish Jerusalem. The Covenant also would seek to create a long-overdue body of reformed and updated international law.In January, Rep. Trent Franks (R-Arizona) assembled a panel of like-minded thinkers in Congress to launch discussion of this. “The UN has become an anti-American, antisemitic, anti-democratic, anti-freedom mob,” he said. “We need some type of alternative – a Covenant of Democratic Nations.”Famed constitutional attorney Nathan Lewin proclaimed to the room that the UN had written its own death warrant by adopting Security Council Resolution 2334 which criminalized Israeli settlements.International law, he said, doesn’t function any longer as “law” as we know it, since it is applied so unevenly and inequitably.The trenchant UN critic Claudia Rosett of the Independent Women’s Forum goes in another direction. She feels that the Covenant of Democratic Nations ideal of “world peace” led by democracies is an overreach. It is too driven by ideals that won’t translate easily into action. (Just how will democracy be defined for membership purposes?) Rosett thinks that the first order of business is not to assemble a general body devoted to “peace” or to “democracy,” but to define, in sparing manner, the functions truly needed by the Western international community, and to create a set of agencies that will tackle these functions separately.Mrs. Rosett just authored an Encounter Broadsides book called What To Do About the UN (downloadable from Amazon). Her guiding principle for replacing the UN is competition.Competition is what takes down monopolies, and the UN is the biggest monopoly of them all. It is a mammoth helped along by immunities, privileges and lavish government contributions, and it is backed by legions of special interest NGOs around the globe that lobby for more.As a result, Rosett writes, the UN has become like the failed collectivist experiments of the 20th century, those huge old Soviet state enterprises and gargantuan Chinese communist industries. It was and is very hard to shutter these behemoths since they are tied into every aspect of a dysfunctional economy plus their employees’ lives. They are a terrible drain.You fix this by creating competition. So Rosett proposes the establishment of several coalitions that are not so much pegged to ideals, but rather are mission-driven by countries with specific shared interests – like NATO during the Cold War.We need to weigh up, she says, exactly what functions currently funneled through the UN are really needed in the 21st century. Then make a judgment about erasing the UN from the equation and instead vesting these functions in professional agencies with no grandiose moral pretensions. Then decide who should be a member of each limited functional agency and who shouldn’t.Then there is the question of some residual usefulness of a global “talking shop” in which even North Korea can bluster and Russia can dissimulate. If at all, this should be a forum for exchange of views only, for blowing off steam.In conversation with me Rosett muses that “It should be a General Assembly minus the votes and minus agencies with multi-billion dollar budgets. It is not a joke to suggest that it would better be housed in a gymnasium somewhere in Iowa (or Siberia) than in a multi-billion dollar gilded chamber in Manhattan.”Rosett admits that replacing the UN with effective alternatives will be difficult. There are big issues to be considered, such as what becomes of UN-housed treaties and a host of international arrangements that have been folded into the UN over the decades – everything from the International Telecommunication Union to the World Intellectual Property Organization.But that is exactly why thinkers and experts need to apply themselves diligently to the task. It is time for those with the know-how, resources and genuine goodwill toward future generations to take an in-depth and non-polemical look at the opportunity cost to the West of cleaving to the UN.www.davidmweinberg.com