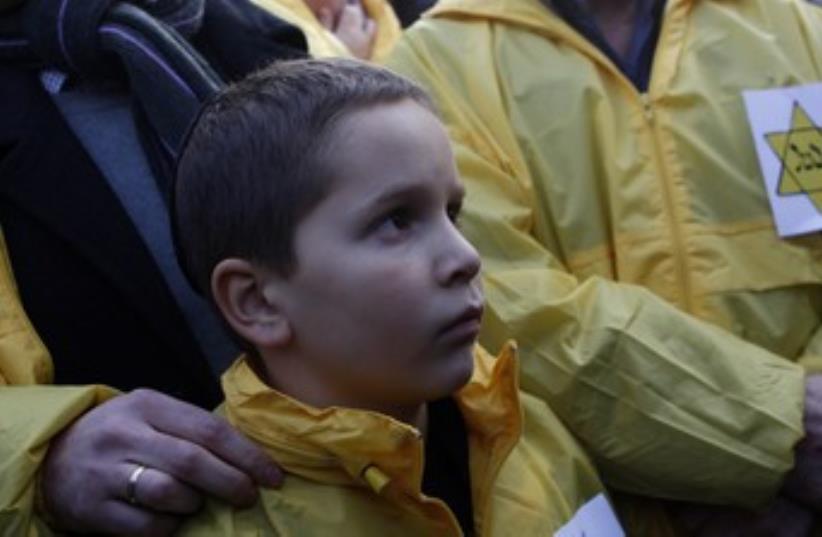 yellow star 370
(photo credit: REUTERS)
Advertisement
Global anti-Semitism is a new phenomenon. It is the third major era of anti-Semitism, after the long religious one grounded in Christianity and Islam, and the modern, racist one that took full shape in the 19th century and culminated in Nazi anti-Semitism and the Holocaust. After relative quiescence during the post-Holocaust decades, when public anti-Semitism in the West was taboo, anti-Semitism began to emerge in its new, global form in the 1990s. Now it surrounds us.Through the ages, anti-Semitism has been grounded in the foundational anti-Semitic paradigm. This has five elements: Jews are fundamentally different from non-Jews.Jews are noxious. Jews are willfully malevolent. Jews are powerful. Jews are therefore dangerous. Either implicit or explicitly stated is a sixth element: that Jews must be kept in check, at bay, or somehow eliminated.In every era, specific anti-Semitic elaborations and accusations build upon this foundational paradigm by adapting themselves to the local cultural, social and political conditions of the times. In today’s global age, anti-Semitism has again morphed into something new.Anti-Semitism, like globalization, for the first time spans the globe. There are many more anti-Semites than ever. More than 50 percent of the five hundred million people in the EU are profoundly anti-Semitic. The United States, where anti-Semitism is much lower, still has more than one hundred million people who espouse anti-Semitic notions. In the Arab and Islamic worlds, anti-Semitism is, in the countries surveyed, close to one hundred percent.Even in the rest of the world, where there are virtually no Jews and have never been any, anti-Semitism is at alarmingly high levels: 5 country’s own Jews, even though such beliefs – such as Jews are guilty or cursed for the death of Jesus, have too much power in business, or care only about “their own kind” – are still enormously widespread.IN LINE with the times, and the historically newfound actual military and political might of Jews in Israel, the dominant anti-Semitic imagery of Jews has also changed.The behind-the-scenes, stealthy manipulator of 17th-century Shylock, or the more open manipulators of nations by Jewish bankers, epitomized by the Rothschilds of the 19th century, have now in the 21st century morphed into the marauding killer Rambos crushing Palestinian children under their boots or grinding them up in meat grinders.This can be seen in the fantastical and demonizing belief – subscribed to by more than 250 million Europeans – that Israel is conducting “a war of extermination” against the Palestinian people; a generalized, updated blood libel, recycling the canard that Jews are collectively guilty for the death of Jesus.In the past anti-Semitic streams, which though always grounded in the foundational anti-Semitic paradigm, mainly existed as independent variants on a common theme. Now anti-Semitism is a global amalgam. Today, Christian anti-Semites, Muslim anti-Semites, leftist anti-Semites, rightest anti-Semites and international human rights anti-Semites all incorporate each other’s false charges against Jews and Israel into their own litanies.Perhaps the most glaring instance of such crossover prejudice is Palestinian and other Islamic-world anti-Semites’ routine characterization of Palestinians, or Palestine itself, as the new Jesus being crucified by the Jews, thereby invoking the most damaging prejudicial canard of all time and appealing to the hundreds of millions of Christians for whom this charge is still such a potent reason to be hostile towards Jews.The flows of anti-Semitic hatreds and accusations, while once emanating from the Christian and then Nazi European center to the periphery, now crisscross the globe with no single locus. Anti-Semitism really did once have a principal address: the Vatican. Today, anti-Semitic charges can originate anywhere and flow in any direction.And once a powerful new anti-Semitic accusation is made in one place it spreads in short order across the world. Modern European anti-Semitism, having been exported to the Arab world, has been reimported into Europe with the flow of Arab immigrants and the flow of words along the information superhighways. This multi-centric nature of global anti-Semitism makes combatting it that much more difficult.Befitting its global nature, anti-Semitism today is ensconced in international and transnational institutions (beyond religious movements). It has captured the world’s most central global institution, the United Nations, which has been conducting a concerted campaign to demonize Israel. Witness its Human Rights Commission’s dishonest and obsessive focus on Israel in contrast to its virtual silence about the brutalities and mass murders of the many dictatorships around the world.As our global age is political in that people now understand that virtually all spheres of life are governed or profoundly influenced by politics. So too today’s anti-Semitism, which before was mainly cultural or socially oriented, has now adopted a political cast.Hence anti-Semitic governments, through the UN and as a matter of domestic and foreign policy, promote anti-Semitism, and indeed have forged something against Israel that exists against no other country: an international eliminationist political alliance.Finally, because nothing incites anti-Semites more than the specter of Jews being powerful, and because the global world is a world organized by the international state system, global anti-Semites relentlessly focus their ire and efforts on deprecating, demonizing and delegitimizing Israel. Many though certainly not all of them want to destroy the country.Such is the logic of today’s globally oriented global anti-Semitism.

The author, a former Harvard professor, is the author of The Devil That Never Dies: The Rise and Threat of Global Antisemitism, which has just been published. He is also the author of #1 international bestseller Hitler’s Willing Executioners: Ordinary Germans and the Holocaust. His work can be followed at www.goldhagen.com, on Facebook at Daniel Goldhagen, and on Twitter @DanielGoldhagen.
Advertisement
Subscribe for our daily newsletter