The “Jewish” side of the formulation “a Jewish and democratic state” is under internal assault as well. 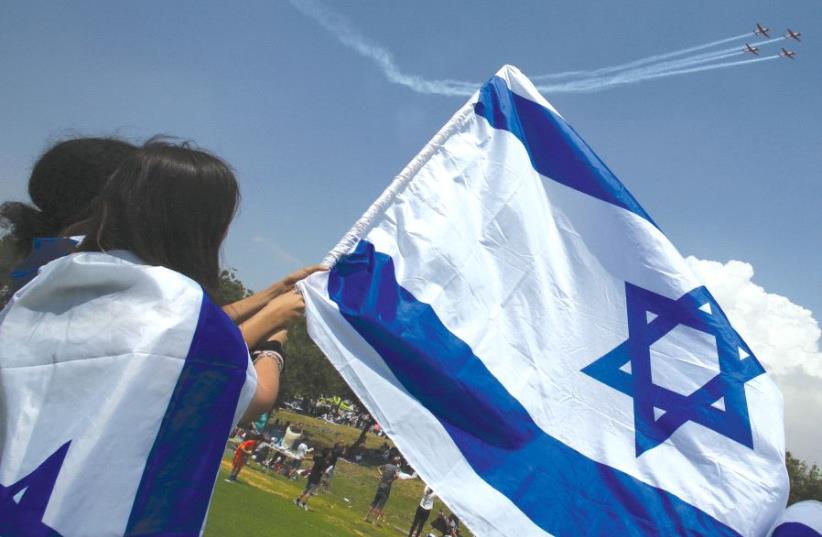 ‘TODAY THE State of Israel’s identification with Jewish nationhood is under attack from all sides.’
(photo credit: REUTERS)
Advertisement
There are heaps of hypocritical and hysterical rhetoric being hurled at the government’s plans to constitutionalize Israel’s status as the Jewish nation-state. So it’s time to remind ourselves why this law is necessary.The Jewish people’s right to live in its homeland like other nations should be obvious and self-evident. But today the State of Israel’s identification with Jewish nationhood is under attack from large parts of the international community, and from Israeli Arabs, Palestinians, post-Zionist Jews and anti-Jewish Jews.The “Jewish” side of the formulation “a Jewish and democratic state” is under internal assault as well.Therefore, Jewish self-determination in the Land of Israel and the Jewish character of Israel need to be enshrined in constitutional form – in a Basic Law.• Exhibit 1 is the series of resolutions passed over the past three years by international organizations such as UNESCO which dismiss or deny Jewish roots in Israel. They have tried to criminalize Jewish settlement in Israel, and outlaw Jewish building and prayer at the holiest places in Israel, specifically Jerusalem.• Exhibit 2 is the infamous Arab Higher Monitoring Committee “vision” document of 2006 which demanded an end to Israel’s Jewish national identity, and declared Israeli Arabs to be an “indigenous minority” with autonomous “national rights.”• Exhibit 3 is Mahmoud Abbas’s refusal to recognize Israel as the national homeland of the Jewish people. Not only does he refuse to acknowledge the Jewish character of the State of Israel, he also demands that his Palestinian state be born without any Jewish minority. In the Palestinian view, Jews don’t have rooted national rights anywhere in “Palestine.”• Exhibit 4 is a bit different, but no less important. It relates to the delicate balance between Israel’s democratic character and its Jewish character, an equilibrium that has been upset over the past 25 years by the Supreme Court beginning with the tenure of court president Aharon Barak.Barak and his ultra-liberal successors have transformed jurisprudence on matters relating to Israel’s Jewish character.They have dramatically diluted the Jewish portion of this equation.They’ve done so on the basis of the Basic Law: Human Dignity and Liberty which was passed by the Knesset in 1992. Despite the fact that this bill was passed almost surreptitiously – as a private member’s bill in the middle of the night, by an underwhelming minority of votes (32 for, 21 against) – the court has turned this Basic Law into a central pillar of jurisprudence. It has imperiously used it to rule with a liberal fist on a broad range of critical issues.This includes laws regarding allocation of JNF land, the status of Hebrew as Israel’s language, rights to residency and citizenship, draft deferments and stipends of yeshiva students, commerce on Shabbat and immigration/deportation.In principle, these cases called for a delicate balancing act between Israel’s democratic character and its Jewish character.But in fact no such balance was achieved, because Israel’s Jewish character, unlike its liberal democratic character, is not anchored in any Basic Law, and thus the liberal court could willfully and easily discount the “Jewish” pull in these cases.The proposed Basic Law: Israel as the Nation State of the Jewish People is intended to redress this asymmetry and to encourage a more sophisticated legal discourse when tensions arise between universal and national/Jewish considerations.It’s true that Israel’s Jewish character is referenced several times in the Declaration of Independence, but so are the many liberal rights later enshrined in the concrete Basic Law on Human Dignity and Liberty. That’s precisely why the liberal rights were codified into law; only laws can be used by the courts to adjudicate cases.As for the objections heard in recent days to provisions of the bill, especially with regard to Arab rights and the status of Arabic in Israel, suffice it to say this: The bill is unremarkable compared to many European constitutions with similar, and stronger, national homeland provisions.According to Kohelet Forum and Northwestern University law professor Eugene Kontorovich, who has researched this matter extensively, the Israeli bill is milder and more inclusive of minority rights than the constitutions of numerous liberal Western democracies. It actually does far less to recognize Jewish nationhood or religion than provisions common in other democratic constitutions.It maintains the operational status of Arabic in this country.NOW TO HYPOCRISY . When MK Avi Dichter first introduced a nation-state bill in Knesset in 2011, it was co-sponsored by 40 MKs, including two-thirds of the Kadima Party including Tzipi Livni and several members of the Labor Party.Yet Livni shamelessly fulminated this week the lies that the proposed Basic Law “discriminates against our Arab minority,” is rooted in “radical nationalism,” and is sponsored by “extremist elements of the right wing.”The inflammatory rhetoric is doubly duplicitous. Not only is the current legislation reasonable (and considerably softer than Dichter’s 2011 version), but it jives with political Left’s purported concern for the Jewishness of Israel.After all, left-wing peace activists are constantly grousing about Israel’s existential need to remain a Jewish state when justifying the call for Israeli withdrawal from Judea and Samaria.In fact, “preserving Israel’s Jewishness” is so important to the withdrawal chorus that its leaders are willing to pay a very high price for this, including the surrendering of historical and religious sites and the expelling of 100,000 or more Jewish settlers from Judea and Samaria.Even foreign leaders like former president Obama and secretary Kerry have justified their pressure on Israel by invoking the preservation of the Israel’s Jewish identity.This is insincerity and insanity: to profess loyalty to Israel as a Jewish nationstate when it comes to pressuring Israel into diplomatic concessions, but to balk at supporting a nation-state law that defines the State of Israel as such! www.davidmweinberg.com