Private land, state land or something else altogether

Woe to the journalist or correspondent who haphazardly uses the term “private Palestinian land” without being up-front and honest about the complex nature of the land in question. 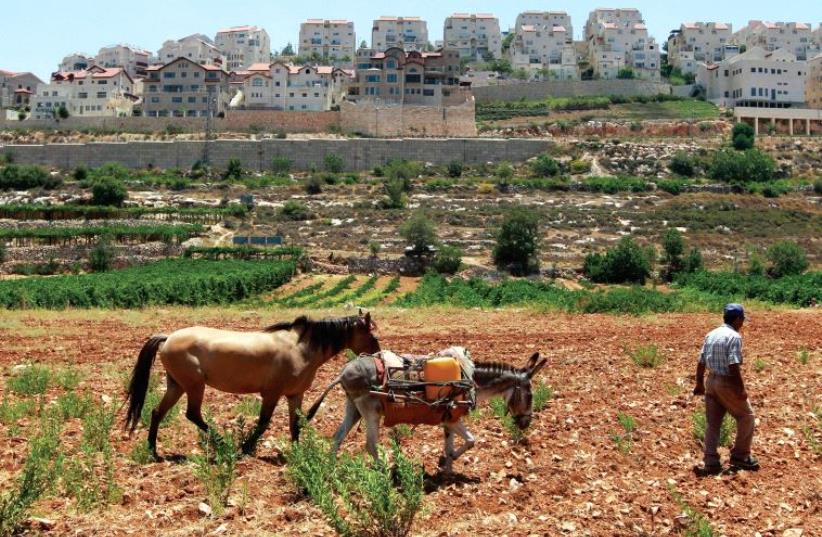 Man, horse and donkey walking outside of Efrat
(photo credit: REUTERS)
It shouldn’t have surprised anyone to hear Zionist Union leader Isaac Herzog state forcefully on a radio program recently that anyone inhabiting “private Palestinian land” should be removed.Just as use of the term “West Bank,” a term invented by the Jordanians in 1950 to justify their occupation, is used to undermine the historical fact that Judea and Samaria have always been clearly accepted and understood to be the cradle of Jewish history and civilization, the use of the term “private Palestinian land” is an abuse of the facts and does huge damage to Israel’s credibility and standing.However, it is not just politicians getting in on the act.Anyone following the press has been seeing more and more articles/ programs where the term is used. It should be clear that its use, in most cases, is incorrect and politically motivated. The term immediately conjures thoughts of improper and most likely illegal behavior, thus nothing more has to be said.However, as is normally the case in Israel, the issue is much more complicated than that.For starters, there are more classifications of land than just private or public.The earliest internationally recognized document containing a reference to land that was neither private nor public was the British Mandate for Palestine, adopted unanimously by the League of Nations in 1922. In Article 6 it stated: “The Administration of Palestine, while ensuring that the rights and position of other sections of the population are not prejudiced, shall facilitate Jewish immigration under suitable conditions and shall encourage, in co-operation with the Jewish agency referred to in Article 4, close settlement by Jews on the land, including State lands and waste lands not required for public purposes.”The Mandate did not introduce the concept of “waste lands.” Eretz Israel having been occupied by the Ottoman Empire for 400 years meant Ottoman land law was the prevailing law.The major Ottoman rewrite of land law occurred in 1858, and spoke of five distinct classes of land: Arazi Memluke – freehold lands (private land) Arazi Miri – crown lands belonging to the state (state land) Arazi Mevkufe – lands possessed in mortmain, but tenanted by a kind of copyhold (Wakf land) Arabic Metruke – lands abandoned without cultivation or ostensible ownership Arazi Mewat – dead lands, uncultivated and unappropriated (waste land) And then within these classes there were further classifications.For example there were four types of private land, two types of Mevkufe land, one of which was land held by the Wakf (a form of Islamic trust), and two types of Metruke land: lands set aside for public use such as access roads, and land left for the use of the inhabitant of the area for use as pasture land.The Ottoman Land Code (OLC) then went on to elucidate in full the laws about how land (including the many different types) could be acquired, gifted, held, bequeathed and sold. Including many restrictions that applied, depending on the exact type of land.As well as the OLC, with the arrival of the British, under the Mandate new rules were established such as the Mewat (waste land) Ordinance of 1921. The British authorities also embarked on renewing and completing the official land registry, that had fallen into disarray during the waning years of the Ottoman Empire. It is important to note that many complications exist today because they never actually finished the job.Then the Jordanians arrived (or Trans-Jordanians as they were called at the time) acting pretty much however they wanted to, allocating land to one tribe and taking land from another at a whim.Fast-forwarding to today, the result is pandemonium and uncertainty, one of the very reasons the Levy Report called for the establishment of a specific court to deal solely with land issues in Judea and Samaria.One of the best examples of this disarray is the disturbing situation of some thousands of Jewish-owned homes in Judea and Samaria that fall into the unnerving category of sitting on land that is of “questionable” status. This is due to the fact that the Civil Administration took it upon itself to put in place a practice of “updating” state land classifications (originally surveyed in the ‘70s) around Jewish towns and as such, redrew town boundaries.The results of this redrawing of the boundaries of state land included the untenable exclusion of inhabited, built-up areas (read: people’s homes), that had previously been wholly included in the town plan and 100 percent legal. This blatantly abusive move of profound impact by the Civil Administration has led to residents, who had legally purchased homes within established communities, having the land their homes sits on being retroactively reclassified as not being state land, bringing into question the ownership of the land and the legality of their homes.For politicians to take such an extremely complex issue and cast it in black or white for political gain is irresponsible but to be expected.However, for journalists, commentators and correspondents, who have a public responsibility to provide the facts, to use simplified, incorrect terminology is inexcusable and literally an abuse of their positions. As we have seen, the status of land here is not simple, but a truly complex and disorderly issue. Woe to the journalist or correspondent who haphazardly uses the term “private Palestinian land” without being up-front and honest about the complex nature of the land in question. The better, more accurate term to use is “non-state land.”

The author is an adviser to Regavim, a research-based legal watchdog dedicated to ensuring responsible, legal, accountable and environmentally friendly use of Israel’s national land.