The United States has, for decades, refused to take concrete steps to influence the Israeli government down a path that reflects America’s official positions on occupation and settlement building. 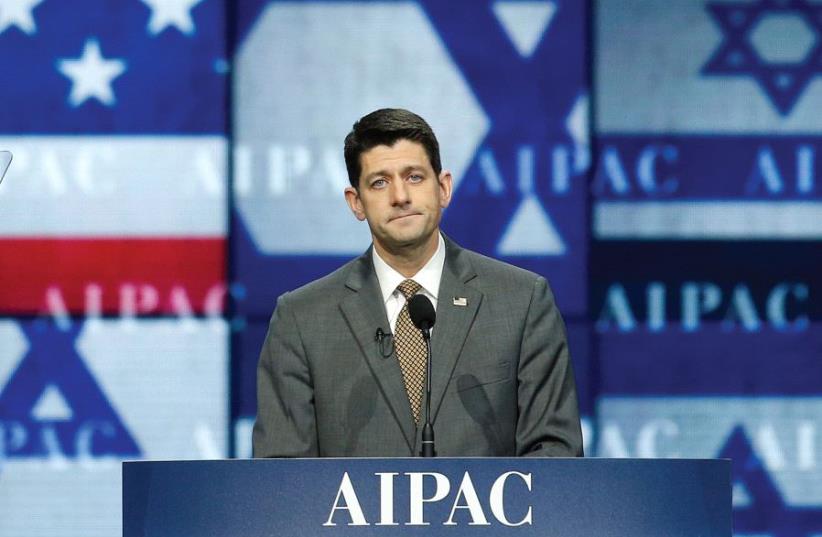 Speaker of the House Paul Ryan (R-WI) speaks at the AIPAC policy conference in Washington in March
(photo credit: REUTERS)
Advertisement
Five years ago, I began teaching a course segment on US-Israel relations. This is a somewhat less dramatic task than it may seem. My university has relatively little activism on the issue and my students tend to arrive with open minds. Nonetheless, it’s a hornet’s nest of a unit to put together. No matter what reading I assign, I’m reminded of five or 10 others that would provide useful context or counterargument. The syllabus never seems quite finished.Ultimately, I decided that, among other works, I would have my students read John Mearsheimer and Stephen M. Walt’s The Israel Lobby, a controversial book that argues pro-Israel interests have a disproportionate, deleterious impact on US policy. Overall, I’ve been happy with this decision.Most of my class, in contrast to the hysterical headlines you may read, tend to the think of Israel as just one country among many.Israel’s relationship to the United States, however, is anything but standard, particularly as it relates to financial and military aid. The Israel Lobby has thus served to shake up complacent students, give pause to those who support American aid to Israel unthinkingly, and indicate to all the importance of questioning existing power structures.However, the book has always had its limitations and recent developments have made these all the more apparent. Given today’s rapidly changing world of political discourse, it is time for a reassessment.The Israel Lobby emerged from a world in which American politics and media maintained a sense of relative calm and coherence. It was published during the rise of candidate Barack Obama’s unifying rhetoric and at a time in which big, traditional media institutions had yet to face their current moment of crisis. It was, as Mearsheimer and Walt argue, a world in which the simplified narratives offered by pro-Israel advocates could more easily escape criticism. The current moment is a very different one.Most notably, the failure of AIPAC and its allies to derail the Iran nuclear agreement has disrupted any story premised on the lobby’s supposed invincibility. Relatedly, today’s landscape of Israel-related lobbying is a more complex one, with somewhat better organization on the part of pro-Palestinian groups and a major new player on the pro-Israel (and pro-peace) side: J Street.In The Israel Lobby, “pro-Israel” lobbying is equated with advocating for the preferences of the Israeli government. J Street, which defied Prime Minister Benjamin Netanyahu in supporting the Iran nuclear deal, has managed to diversify the sort of Israel advocacy that can impact the highest levels of American politics. It is unclear that Mearsheimer and Walt’s argument leaves space for this sort of complexity.Additionally, few US students today enter the classroom having been sheltered from criticism of Israel in the fashion that Mearsheimer and Walt describe. Although the most famous voices in American media still tend to support Israel, many outlets with considerable reach are quite willing to offer criticism.In particular, Netanyahu, with his easy use of ethno-national chauvinism, has joined Donald Trump and Vladimir Putin as a target of widespread scorn from left-leaning news sources. It is questionable whether media discourse was ever as limited as The Israel Lobby argues. It is certain that today’s world of expanding media choices gives a greater range of perspectives.Perhaps most disturbingly, there is the question of resurgent antisemitism. In The Israel Lobby, American antisemitism is presented as a relic of the past and described as a “lingering” phenomenon with a “despicable legacy.” I must admit that, when I first assigned the book in 2012, this subtly dismissive position seemed more or less correct.But Trump’s campaign, Charlottesville and countless other events have shaken my confidence. Too much dog-whistling and outright hatred has been aired for antisemitism to be belittled as an old thing people now use to silence Israel’s critics. I fear that The Israel Lobby implies that antisemitism is not a clear, present concern, and in class I have to actively combat this perception.And yet, even as I grapple with these problems, I continue to teach The Israel Lobby. Why? Because it is brave enough to ask questions that still need answering.The United States has, for decades, refused to take concrete steps to influence the Israeli government down a path that reflects America’s official positions on occupation and settlement building. American aid to Israel remains largely unquestioned and, despite the broader range of available media perspectives, our politicians still refuse to step out of line with the status quo.Most damningly, when Palestinians are a part of US political discourse, it is only rarely out of concern for their rights, freedoms, and safety.I by no means want my students to believe this reality has a single cause. I offer them critiques of The Israel Lobby and a number of competing texts to ensure this. But part of the answer, certainly, can be understood through Mearsheimer and Walt’s analysis of the fundamentals of the American lobbying system.Furthermore, given the hysterical response the book found at its release, it might be long while before an updated, similarly comprehensive analysis emerges.Until then, or until the facts change for the better, I’ll embrace my unease, add some of those other five or 10 readings, and work with what I’ve got.

The writer is an associate professor of communication and international studies at Boston College. Follow him on Twitter @mediastudied.