Responding to unjust accusation of antisemitism against Senator Robert Menendez

With the active threats against Jews across the country and around the globe, we are regularly reminded that antisemitism is real, and it is scary. 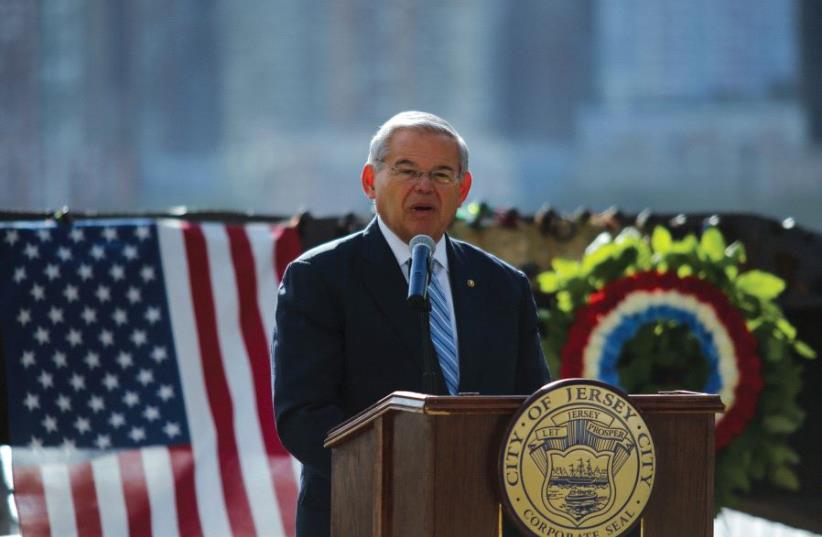 US SENATOR Robert Menendez speaks to the guests as he attends a ceremony for 9/11 victims in 2015.
(photo credit: REUTERS)
Advertisement
A recent op-ed featured in The Jerusalem Post (“Senator Menendez and the Pollard effect,” February 20) levied erroneous accusations of antisemitism against Senator Robert Menendez (D-New Jersey) during the Senate Foreign Relations Committee hearing on the nomination of David Friedman.These accusatory remarks, based on a question of Friedman’s adherence to his prospective duties as ambassador, are gross distortions of Senator Menendez’s stance on Israel and his relationship with his Jewish constituency. The senator was questioning whether Friedman, who is personally passionate about a particular issue – in this case Israel – would be able to make the transition from private citizen-advocate to an official representative of the United States government.In policy making and diplomacy for any issue, personal passions must often be put aside.Senator Menendez has a long history as one of the staunchest supporters of the Jewish community and the State of Israel.He was among the first members of his party to publicly denounce the 2015 Iran deal, a deal which the author of the op-ed in question also heavily lambasted, and he has been either the author or leading sponsor on almost all bipartisan pro-Israel legislation. He has regularly fought to promote the safety and security of Israel even at times against his own party leadership, which entailed significant personal risk and cost. The largest Jewish newspaper in Bergen County appropriately labeled Senator Menendez the “Father of the Iron Dome.”In battles large and small, he has fought for Israel as the “one true democracy in a sea of autocracy,” to use a phrase he often favors.Senator Menendez speaks out, constantly, and consistently, in public and privately with foreign and domestic leaders against discrimination toward Jews and toward support for our ally Israel. He’s been a fierce critic of the Boycott, Divestment and Sanctions (BDS) movement, and of antisemitism in Europe, the Middle East and on college campuses right here at home. In my personal capacity as the national president of NORPAC and as a board member of multiple major Jewish organizations, I have found no stronger and consistent advocate on our issues than Senator Menendez.We must take care as to against whom, and when, we level accusations of antisemitism.This accusation is careless, improper and hurtful against someone who has been a champion on US-Israel relations. In a different generation, someone like Menendez would certainly merit a place among the “Righteous Among the Nations” at Yad Vashem.With the active threats against Jews across the country and around the globe, we are regularly reminded that antisemitism is real, and it is scary. So let’s focus on its reality– not some made-up attack by someone who does not fully appreciate the Senator’s record.