Only 14% of Israelis carry the ADI card donating their organs for future lifesaving, while dozens, maybe hundreds of men, women and children die waiting for an organ. 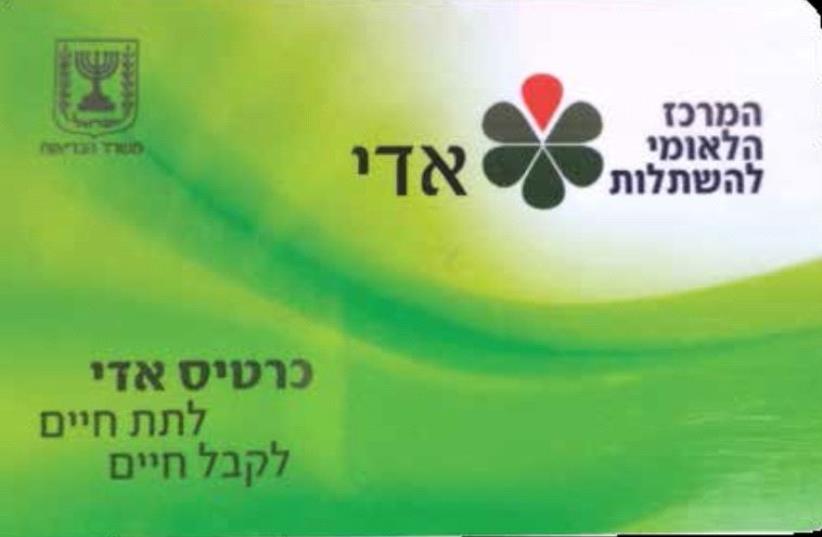 Edi card
(photo credit: Courtesy)
Advertisement
Katrina was only 49 and she was dying. The doctors in Israel’s major medical centers – Tel Haifa, Tel Aviv and Jerusalem – agreed: without a new liver, this mother-of-two had no chance of survival. Yet not only is the Israeli waiting list for organ transplants longer than it should be, but as a foreign worker Katrina wasn’t even eligible to get on the list.Transplants have been a contentious issue in Israel. Ironically, in a country with medical expertise and where saving life is a supreme ethical value, organs for transplantation are not abundant. Only 14% of Israelis carry the ADI card donating their organs for future lifesaving, while dozens, maybe hundreds of men, women and children die waiting for an organ. Another study shows that even among those of us who say we are ready to donate our organs when we die, only 16% are card-carrying donors.At the beginning of this year, 1,160 persons were on the waiting list. These numbers don’t include those like Katrina who can’t get on the list.Katrina had come to Israel legally from Moldova seven years earlier. She was a caretaker for a disabled person in Tel Aviv.After the person she was caring for died, she moved to Haifa to care for another person. There she met her future husband, Paul, 57, who was working in the research and development section of Apple Corporation.Paul had two sons – one an IDF soldier – and Katrina had two daughters.They both spoke Russian.They decided to get married, even though Katrina had a nagging health problem that kept her feeling below par.She was a little tired and weak, but attributed it to the move and a minor liver problem. She’d been diagnosed with cirrhosis and hepatitis and was treated for it when she was living in Tel Aviv.Three months ago Katrina became much sicker. At Rambam Medical Center in Haifa, in Sourasky Medical Center in Tel Aviv and in the Rabin Medical Center in Petah Tikva, there was a consensus that nothing but a transplant would help.The family found a donor from Moldova, for whom Paul bought a ticket to Israel.But when he arrived at Ben-Gurion Airport, he was sent home. He had failed to undergo the screening process and receive permission from the Health Ministry for a live donation.In the meantime, Katrina’s health deteriorated.By Yom Kippur, she was in a near vegetative state and in need of intensive care. While Paul was in the waiting room, he happened to hear about Prof.Rifaat Safadi, head of the Liver Unit at the Hadassah University Medical Center in Jerusalem, where there was a machine called MARS (Molecular Adsorbents Recirculation System) which washes the blood and can serve as a bridge to the transplant procedure.Katrina arrived at the hospital in a desperate state. With intense treatment she recovered consciousness and overcame an infection in her abdomen. MARS wouldn’t do it. The Jerusalem team also concluded that without a transplant, she would have only a few weeks of life.The day before, Dr. Hadar Merhav, head of transplantation surgery in the hospital, had transplanted, into an Israeli citizen, a liver donated by a Filipino tourist who died in Israel. He and the entire transplant team saw denying Katrina a transplant was a travesty. Said Merhav, “A person working legally in Israel for seven years, paying taxes and medical insurance and providing a unique service for the elderly and disabled cannot and should not be denied lifesaving medical care – especially in light of the frequent use of organs donated by guest workers and tourists who die in Israel. Medically, legally and ethically, Katrina deserved to be placed on the list.”He convinced Dr. Marius Braun, chairman of the liver committee of the Israel Transplant Center, who enlisted the help of Prof. Rafael Biar, chairman of the center’s steering committee. Biar was abroad, but he ratified the decision of the liver committee.Katrina’s condition was so dire that she was placed at the top of the list.“Miraculously,” in Merhav’s words, within several hours after listing, a liver became available in Haifa.I heard this story from Dr. Abed Khalaileh, who gave me a ride home from the hospital after staying late with a friend who was undergoing surgery. He was ebullient.He told me about traveling to Haifa at 2 a.m. to see the liver. There had been reservations initially regarding the quality of the liver, whether it was good enough for a transplant. After examining it, he declared it, in his words, “a doll of a liver.”Merhav performed Katrina’s liver transplant on October 21 at 3 a.m. Five hours later, she had a new liver and a new beginning of her life.As it turned out, Katrina occupied the room next to my friend’s in the hospital tower. I dropped in frequently to visit her, to meet a woman who was so close to death, but who now has a life to look forward to and children to bring up. Every day, she changed shades of yellow: saffron and ocher and amber. And then she went home.Miracles don’t happen in a vacuum.Let’s all get our donor cards today (https:// www.adi.gov.il/en/) and Halachic Organ Donors (http://www.hods.org/). The author is a Jerusalem writer who focuses on the stories of modern Israel. She serves as the Israel director of public relations for Hadassah, the Women’s Zionist Organization of America. The views in her columns are her own.