The Srebrenica massacre must be recognized as a genocide

Approximately 8,000 Bosnian Muslim men and boys between the ages of 12 and 77 were murdered at the hands of paramilitary Christian Bosnian-Serbian thugs. 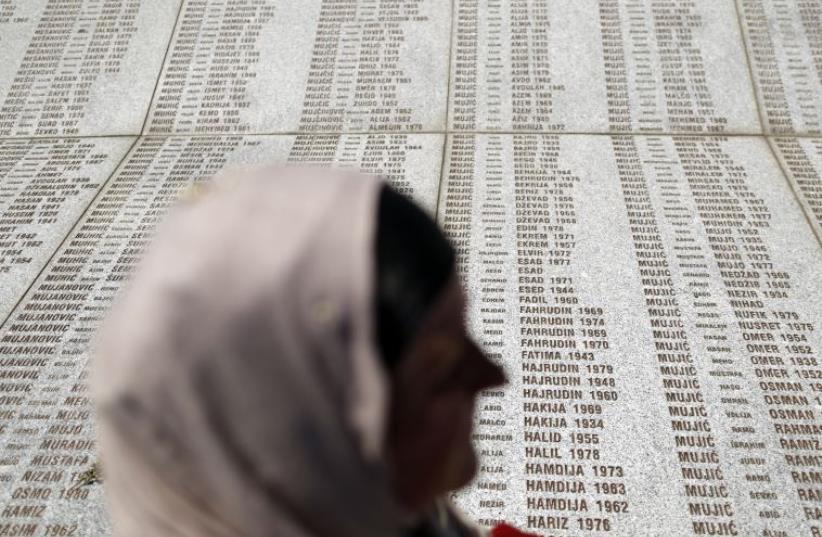 A woman stands in front of the Memorial Center during a reburial ceremony of 136 newly identified victims in Potocari, near Srebrenica, Bosnia and Herzegovina
(photo credit: REUTERS)
Advertisement
Twenty years ago, a place in eastern Bosnia called Srebrenica entered the annals of genocide alongside Auschwitz-Birkenau, Musa Dagh and Butare.Russia’s veto last week of a United Nations Security Council resolution that would have condemned “in the strongest terms the crime of genocide at Srebrenica” flies in the face of both history and international law. It is also fundamentally immoral.Auschwitz-Birkenau, as we all know, was the most notorious of the Nazi death and concentration camps where the Holocaust of European Jewry was perpetrated. Musa Dagh is the region of the Ottoman Empire where several thousand Armenians resisted for 53 days in 1915 against the efforts to destroy them in what has become known as the Armenian Genocide. Butare is the Rwanda préfecture, or province, where it is estimated that 220,000 Tutsis were slaughtered by their Hutu neighbors and compatriots during that country’s 1994 genocide.At Srebrenica, over the course of several days beginning on July 13, 1995, approximately 8,000 Bosnian Muslim men and boys between the ages of 12 and 77 were murdered at the hands of paramilitary Christian Bosnian-Serbian thugs in the worst atrocity of the 1992-1995 Bosnian War.The 1948 UN Convention on the Prevention and Punishment of the Crime of Genocide provides that killing members of a group “with intent to destroy, in whole or in part, [that] national, ethnical, racial or religious group, as such” constitutes the crime of genocide under international law.In 2007, the International Court of Justice held that, “The acts committed at Srebrenica ... were committed with the specific intent to destroy in part the group of the Muslims of Bosnia-Herzegovina as such, and accordingly ... these were acts of genocide.” The International Criminal Tribunal for the Former Yugoslavia had previously reached a similar conclusion.Russia’s ambassador to the UN, Vitaly Churkin, disparaged the proposed UN resolution on Srebrenica as “not constructive, confrontational and politically motivated.”In a similar vein, Ephraim Zuroff, the director of the Simon Wiesenthal Center’s Israel office, told the Belgrade-based newspaper Politika last month that he did not believe that what happened at Srebrenica “fit the description or definition of genocide and I think that the decision to call this genocide was adopted for political reasons.”I respectfully but most emphatically disagree with both Ambassador Churkin and Ephraim Zuroff.On the night of August 3-4, 1943, my brother, my mother’s son, was murdered in one of the Birkenau gas chambers together with his father and his – our – grandparents.I cannot in good conscience condemn the perpetrators of the genocide in which my brother and my grandparents perished unless I also condemn the perpetrators of all other acts of genocide, including the genocide that took place at Srebrenica.I cannot in good conscience mourn my brother as a victim of genocide unless I similarly mourn all other victims of genocide, including the victims at Srebrenica.I teach about the law of genocide and post- World War II war-crimes trials at the law schools of Columbia and Cornell Universities. Several years ago, one of my students was Adisada Dudic, who had spent three years as a child in Bosnian refugee camps with her mother and sisters.“My home country is destroyed,” Adisada wrote in her paper for my course, “my family members are scattered all over the world, thousands of Bosnian women and girls were raped and ravaged, thousands of Bosnian men and boys were tortured in concentration camps and buried in mass graves, and so many of my people were slaughtered by an enemy hand that was out to get every single person that self-identified as a Bosnian Muslim.”It is unconscionable and reprehensible for anyone to tell Adisada that the horrors to which her fellow Bosnian Muslims – including quite possibly members of her own family – were subjected at Srebrenica did not constitute a genocide, just as it is unconscionable and reprehensible for anyone to deny the genocide in which my brother, my grandparents and millions of other European Jews were annihilated.I tell my students that it makes no difference to those slaughtered at Srebrenica or in Butare that they were murdered by bullets or machetes rather than in sophisticated gas chambers. “The last thing we should ever participate in,” writes Hannah Rosenthal, former US State Department Special Envoy to Monitor and Combat Anti-Semitism, in God, Faith & Identity from the Ashes: Reflections of Children and Grandchildren of Holocaust Survivors, a recently published book I compiled and edited, “is competing victimhoods.”Just as we commemorate the victims of the Holocaust, the dead of these other atrocities deserve the dignity and, yes, the posthumous justice of having the enormity of the crimes that took their lives duly recognized by the international community.Not downplaying or disparaging the gravity of the genocide that took place at Srebrenica 20 years ago is, therefore, a moral imperative.The author lectures on the law of genocide at the law schools of Columbia and Cornell Universities.He is the editor of God, Faith & Identity from the Ashes: Reflections of Children and Grandchildren of Holocaust Survivors (Jewish Lights Publishing, 2015).