The dark side of the rainbow

These are dark times in the Middle East, especially for the LGBT communities. 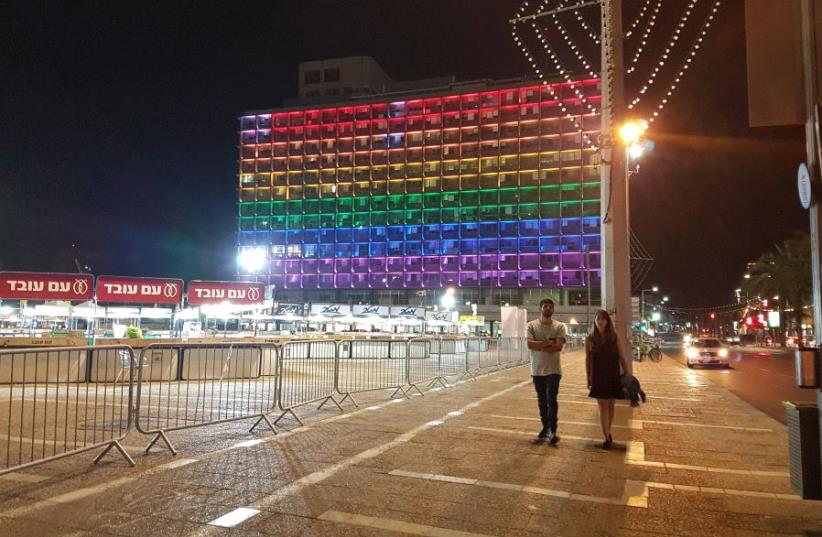 Tel Aviv City Hall lights up for pride‏ - June 6, 2017
(photo credit: BECKY BROTHMAN)
Advertisement
As pride month begins around the world, I am disappointed to admit that even as an openly queer individual, I cannot fully celebrate it with my international LGBT community, as fractions of my community are still fighting against me. From a community that has established itself on the grounds of fighting for equality and acceptance, it baffles me as to how so many of the members of my community can practice the very same bigotry that we are fighting against. And why? Simply because of my nationality.Being an Israeli secular Jew, half African, half Iraqi and queer, I know oppression all too well. I’ve experienced the challenges of acceptance at every stage of my life. I always fought against LGBT phobia, racism and all other forms of bigotry.Being who I am, I felt like I never had any other option.But when I was first attacked by members of the international LGBT community for my nationality I was caught off guard. Yes, my own family, of people who know first-hand how difficult it is to be who you are, are joining a campaign to persecute me because of where I born.This group from within the LGBT community is promoting a campaign against “pinkwashing,” which they describe as Israel using its LGBT community to whitewash the conflict with our neighboring Arab and Muslim countries, and most obviously the Palestinians. As an ex-humanitarian officer in the IDF, someone who worked in the West Bank with Palestinians on a daily basis between 2007 to 2012, I know how challenging this conflict is and fully support a two-state solution.But what does this conflict have to do with the progress that the Israeli LGBT community has made, and why can’t we celebrate it? Some even go as far as attacking LGBT activists that support Israel, as they did last week in New York. Or calling on LGBT leaders and artists who planned to attend the Israeli Pride Parade to cancel their visit – to culturally isolate my country and its LGBT community until the conflict is over.It does not make any sense, but these calls are increasing and are somehow becoming a legitimate matter to discuss. It is twisted.One of my closest American liberal friends told me recently that I should accept the fact that because of the actions of our leaders, my country will not be able to celebrate its LGBT community. Given that I, too, am very critical of my country’s government actions and politics, I can fully understand their frustration with the current Israeli leadership.And yet, to use the same logic, if the leader of a country is a racist, sexist, patriarchal bigot that was quoted saying terrible things about women, is in favor of banning Muslims from entering his country and mocks the disabled, should we all boycott this country’s people? Should we urge the world to boycott its pride events because of him? Or should we back them, celebrate them and promote this community within a country that deserves our support? Instead of supporting the Israeli LGBT community, that is in need of their support, there are LGBT activists around the world who instead decide to join a campaign tailored by people with a clear political agenda. Bodies which have nothing to do with our struggle for justice. A campaign which was established by several Gulf state-supported, media and strategy groups. Their goal is simple: to exploit the international LGBT community to fight their own political war against Israel.Activists in my own community are being used to fight on the side of dictatorial, anti-gay Arab leaders with whom they have nothing in common.Why would an LGBT activist choose to fight for a political issue and not an LGBT issue? When you decide to use your LGBT identity to fight against Israel’s LGBT community, for a political cause, it makes you the “pinkwasher” – not the Israeli government.These are dark times in the Middle East, especially for the LGBT communities. Minorities are under daily attacks and the LGBT community is under daily attack in most Arab and Muslim countries – where being gay may get you the death penalty.Today more than ever, we must be united as one community.There are enough issues to polarize the public debate, many political issues to discuss and to solve. Many Israelis, such as myself, are devoting their time and effort to coming up with a solution to this complex conflict. Israelis work day and night to bring peace about. But this conflict has nothing to do with our struggle as LGBT people, and to use our identity to fight for political issues is wrong and dangerous.We need the LGBT community’s voice, not to attack us, but to support us, to celebrate our achievements. This is what we are all about – coming together against discrimination, against bigotry, against hate.The author is a strategic communications consultant and activist from Tel Aviv. @HenMazzig