The deeper connection between Bernie Sanders and Larry David

From Bernie’s perspective, Zimmerman’s ideas spoke to a deeply Jewish concern for all of humanity and especially for Palestinians. 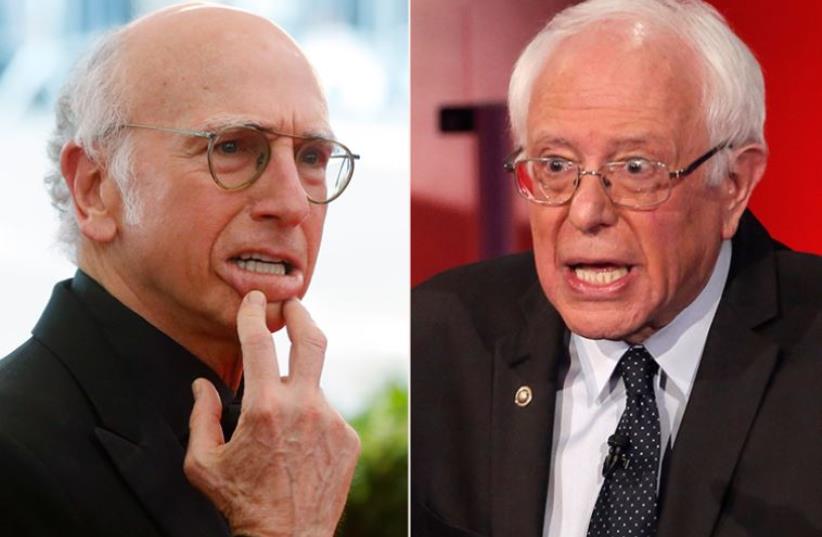 Bernie Sanders and Larry David
(photo credit: REUTERS)
Advertisement
Last month we learned that Bernie Sanders and Larry David are cousins. This falls a bit short of blockbuster news, landing somewhere between a Trump twitter typo and the green-lighting of Wonder Woman 2 on the surprise scale.But the Bernie-Larry connection is something more than the harmless, Nouvelle Vaudeville act suggested by its light-hearted popularity. Sanders’ persistent association with David, while much fun, underscores a fundamental challenge to Bernie’s self-presentation as a politician and as an American Jew.Yes, David looks and sounds like Sanders, making the convergence of their personae a natural outcome in an identity-obsessed, meme-driven public sphere.Nonetheless, their outlooks could hardly be more different, with Larry’s Jewish alienation representing exactly what Bernie’s commitment to extreme Jewish universalism works to dispel.Larry David, or at least the TV version of him, is a man for whom Jewishness is always a burden and a barrier, if also a source grudging pride. Steeped in the post-war Ashkenazi-American literary tradition forged by Philip Roth, Woody Allen and others, Curb Your Enthusiasm is the story of a Jewish man who can never quite connect. Storylines are peppered with interfaith miscommunications and misfires, with Larry peeing on Jesus, destroying his own ill-conceived Nativity scene and using his in-law’s Passion of the Christ nail to hastily affix a mezuza. His character speaks to the permanent, even celebrated, place that a certain brand of Jewishness has forged for itself in American life. It also preserves a sense of separation and fundamental difference, with Larry’s bald head and Brooklyn-accent attesting to the divide.Bernie, of course, cannot help but participate in these superficial Semitic markers. In all other realms, however, he works hard to distance himself from Jewish tribalism. At times, this distance is literal, with Bernie’s chosen home of Vermont inverting David’s New York and Hollywood milieus, at least in terms of synagogues and bagel shops per square mile. At others, Sanders’ approach to Jewishness can look like disavowal, as it did when, during the 2016 primary season, he described himself as the son of “Polish immigrants.”More often, however, Bernie attempts a far more subtle and laudable maneuver, working to positively assert his Jewishness as a universal value system capable of breaking down barriers. At another key moment during the primary, Sanders addressed a Muslim supporter by attesting “I am Jewish,” and marshaling this fact as evidence that he would, naturally, be a champion in the fight against Islamophobia. There is, certainly, a tension inherent in this statement, given the obvious ways in Jews and Muslims around the world struggle to understand the challenges facing one another. At the same time, however, Sanders was invoking a longstanding, if seemingly self-contradictory, idea of what it means to be a Jew.For millennia, both deeply religious and fully secular scholars have worked to articulate a notion of Jewish practice and identity by which the Jew is both a unique being and a conduit of universal values. Maimonides argued that although the religious Jew acts in an idiosyncratic, tribalistic fashion, she does so in order to bring about a redemption that will benefit all of humanity. Jacques Derrida, far from a religious believer, spoke of a “paradox of Jewish universality,” whereby the Jew proves himself to be a devoted member of the tribe by thinking beyond his co-religionists and acting on behalf of all people. These ideas, much like Bernie’s preferred Jewish self-identity, emphasize the second piece of Rabbi Hillel’s famous statement in the mishna: “If I am only for myself, who am I?” One suspects Larry might be more attracted to the first line: “If I am not for myself, who will be for me?” Bernie’s nuanced relationship to Jewishness is, quite apparently, a tough one to articulate in the contemporary moment.For one, we live in an era in which tribal identities dominate discussions across the political spectrum. Furthermore, although Sanders embraces a sense of Jewish security that allows for a more universalist worldview, such is not the case for many of his ethnic brethren. This became all too clear when he was forced to dismiss his Jewish outreach coordinator, Simone Zimmerman, due to her forceful, colorful critiques of the Israeli government. From Bernie’s perspective, Zimmerman’s ideas spoke to a deeply Jewish concern for all of humanity and especially for Palestinians. For many in the Jewish world, however, such universal Jewishness was tantamount to a betrayal. If we are really a people apart, as the Book of Curb suggests, we can hardly afford to be attacking our own.By no means should Bernie work to distance himself from Larry. It’s too much fun and, for most Americans, the particular shape of Sanders’ Jewishness is of little concern. But perhaps more attention might be paid to the irony of their differences in the face such wonderful similarities. After all, Jews, of all people, should know that cousins don’t always see eye to eye.The author is associate professor of communication and international studies at Boston College.
Follow him of Twitter @mediastudied.
Advertisement
Subscribe for our daily newsletter