Comment: End of an era - The many faces of Shimon Peres

After so many years, and so much doing, there is something in Peres’ bio for almost every Israeli to grab onto. 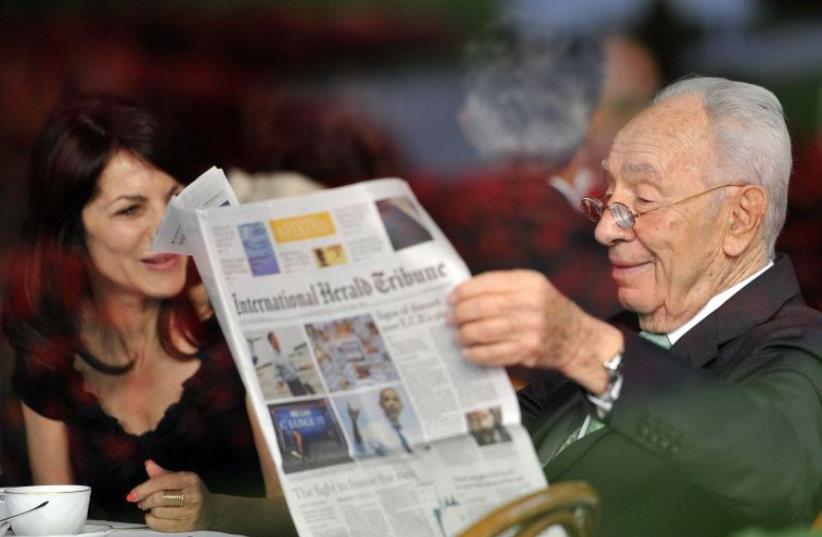 Shimon Peres reads a newspaper during the Ambrosetti workshop in Cernobbio, Italy, September 2012
(photo credit: REUTERS)
Advertisement
It is symbolic that Shimon Peres' final appearance before a camera two weeks ago – the morning of the day that he was stricken by a stroke – was to encourage people to buy Israeli-made products.“I recommend to you, to us, to everyone to buy blue-and-white products,” he said in a clip that was later posted on his Facebook page. “Not only because that is more patriotic, but simply because they are better.”That was Peres to the end – a patriot, someone enormously proud of the country's accomplishments, someone always trying to promote the state.With a public career going back to before the establishment of the state, there are many Peres' to remember.There is the ambitious aid to David Ben-Gurion; there is father of the country's military industries; the architect of its nuclear capabilities; the patron of the early settlements; the political foil to Yitzhak Rabin, Menachem Begin and Yitzhak Shamir; the Oslo dreamer; the New Middle East visionary; the unifying president.After so many years, and so much doing, there is something in Peres’ bio for almost every Israeli to grab onto.Don't like his role in setting up the Labor Party settlements after the Six Day War, then focus on his push for peace with Yasser Arafat. Don't like his push for peace with Arafat, then focus on his signature role in establishing Israel's nuclear deterrence. Don't like his signature role in establishing Israel's nuclear deterrence, then focus on his part in slaying galloping inflation and forging an economic revival in the 1980s.There is enough Peres for everyone; enough in his basket of achievements to force those who adamantly took issue with him on one major issue, to perhaps say, “But look at all the other things he did for the state.”And he did do an enormous amount for the state. As Prime Minister Benjamin Netanyahu said Wednesday, few people in the country's history have done more to anchor Israel as a firm reality – not a passing episode – than Peres.Netanyahu had another simple, but rather eye-opening observation: “This is Israel's first day without Peres.”The man who was always in the public's eye from the very beginning; who was a set piece of the country's furniture; whose distinct voice you could count on hearing in the media every few hours (at certain times of his career), then every few days, and more recently every few weeks, is no longer.“Can you imagine a breakfast without an Israeli salad,” Peres asked in his last video.” Can you set the table without Israeli fruit?” By the same token, it will take time to adjust to an Israel without Peres.For much of the world, moreover, Israel was Peres. Or, rather, Peres was the world's ideal Israel; the Israel of their dreams and imaginations.For a good part of his life, Peres was liked more abroad, than at home. Abroad he represented all the values the world loved most about the Jewish state: He seemed eternally young, he built his country with his own hands, he turned from hawk to dove. Peres was tough, stood his own ground when needed, but kept his hand extended in peace, even while no one was taking his hand or – worse -- were were bending and twisting his fingers backward.It is that very quality – having people spit on you and calling it rain – that endeared him abroad, even as it turned part of the public sour to him in Israel. There was a dissonance in the 90s between the vision Peres was preaching and pushing, and the reality the country was facing. Nevertheless, he kept dreaming.In that final video, the one where he was entreating the country to buy blue-and-white, he said, “Three-hundred and fifty foreign companies have invested here. They came here. Why did they come? Because our products have a great name. What is good for them, is good for us.”That same idea might be applied to Peres himself. It took the world to recognize his achievements, to shower him with adulation, before the country came around to it and – once he became president in 2007 – afforded him the same type of affection and stature he was afforded abroad.What was most telling about Peres was that he never gave up. His party rejected him in leadership races time after time, the country at the polls rejected him for prime minister time after time, yet he was not deterred. He kept trying. Close the front door, and he'll come through the back one; close the back one, and he'll crawl through the window; close the window, and he’ll squeeze through the attic. And, through it all, he did not sour on the state.Peres's daughter Tzvia Walden gave a glint of what motivated him in an Israel Radio interview on Wednesday.“He immigrated to Israel as a boy before the Holocaust,” she said, adding that all the members of his family who remained in Europe were killed. “From nothing, there became a state, which was a miracle in his eyes.“And he lived with this sense of the miraculous, and never ceased to be in wonder that we have a state. He never took that for granted, and he never forgot the alternatives, what came before -- those things make it possible for you to overcome things, to close an eye.”Also, she said, her father looked at the country’s situation through a wider historical perspective. “What is 60 years of statehood, compared to 2,000 years [of exile]. He really thought that way. And with that perspective many things were dwarfed, and difficulties are dwarfed, because in the end you see we are an amazing story.”Peres devoted his life to that story, and in that story he played an outsized role.