Think about it: Was there a golden calf in Rabin Square?

Detesting Netanyahu is not a golden calf – it is a sincere sentiment. 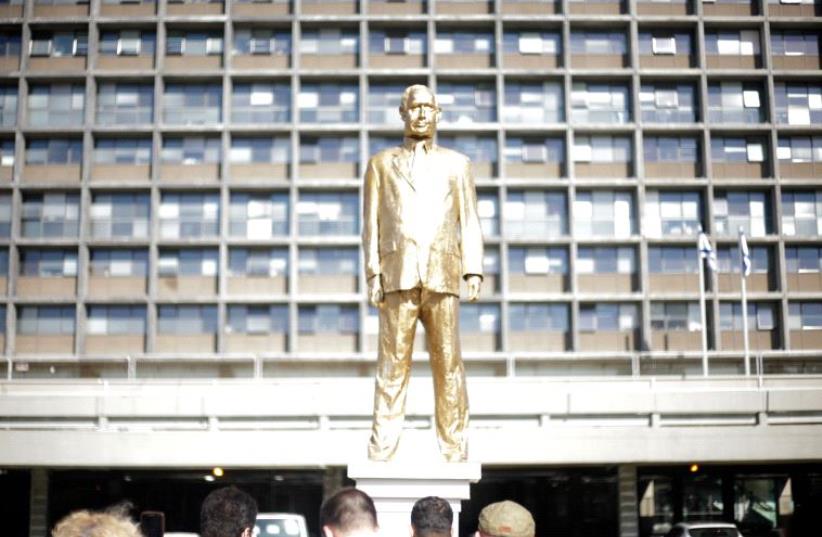 Golden statue of Netanyahu looms over Rabin Square
(photo credit: ELIYAHU KAMISHER)
Advertisement
There are many ways one can look at the gilded statue of Prime Minister Benjamin Netanyahu (made of wood and polymers) that was erected in Tel Aviv’s Rabin Square by artist Itai Zalait on the night of December 5.The artist himself had given notice of his intention “to undertake a subversive artistic political act.” After installing the statue he added that his purpose was to examine the state of freedom of expression in Israel, and the public reactions to the statue, adding that he was sure that his act would lead to reactions of horror on the one hand and pride on the other. I suspect that the barely known artist also had some thoughts about gaining publicity.In fact, the possible reactions to such a statue are much more numerous and varied than suggested by Zalait.One reaction was to view it as a provocative act, seeking to examine whether the Israeli public is mentally prepared for a dictator – for only in dictatorships are the statues of leaders placed in town squares, to be revered.If this were the intention then choosing Rabin Square was a mistake. Tel Aviv is as far removed from sympathy for a dictatorship as any town in Israel could possibly be, and the negative reaction was to be expected. Lack of imagination or a sense of humor rendered some of the reactions ridiculous.Besides, in Tel Aviv the idea of placing anything reminiscent of Netanyahu on the square where Rabin was assassinated is sacrilegious – not because Netanyahu can be accused of being directly responsible for Rabin’s assassination, but because he failed to condemn the vicious incitement against Rabin before November 4, 1995, and was the person who benefited most from the assassination (given that had Rabin survived, he would most likely have been reelected in the 1996 elections for prime minister).But how would the public have reacted had the statue been placed in a town square anywhere else in Israel? Without doubt religious citizens would have claimed the statue was sacrilegious. A golden statue in particular has a special taboo attached to it in Judaism because of the story of the golden calf. True, what was being tested was not the people’s commitment to the 10 commandments, but to democracy. However, a golden calf is still viewed as a despicable substitute for what is considered sublime – be it the 10 commandments or democracy.I suspect that most Israelis of Former Soviet Union origin, even those with right-wing leanings, also feel revulsion at the idea of statues of leaders – any leaders – being placed on the town square, for historical reasons and due to personal memories.Israelis with right-wing leanings who have not experienced living under a dictatorship might be more partial to the idea – especially if they are Netanyahu fans. Thus, one of the bystanders at Rabin Square last week commented that “Bibi [Netanyahu] is gold, and the situation is gold.”Netanyahu himself reacted to the whole episode humorously (good for him!), while Culture and Sports Minister Miri Regev had the following to say: “How detached can an artist be from reality? Israel is a democracy, [with] individual rights, civil rights, moral sensitivity, an activist court, free media, and in short, one of the super-free states... but [this is] detached art, whose only golden calf is hatred of Netanyahu.”No doubt Israel is still a democracy and a free state, where individual and civil rights are upheld (unless you happen to be a Palestinian or an African refugee); in which the sensitivities of every Jew are taken into consideration (as long as he is Orthodox, and not Reform or Conservative); whose Supreme Court is still relatively activist (but in danger of becoming much more conservative and passive if Justice Minister Shaked gets her way); and whose media might be considered to be excessively free (but apparently not for much longer, if Netanyahu, as communications minister, prevails).And yes – Netanyahu is detested by many for his failure to be the prime minister of everyone, not only the Right, and for his personal conduct, which many find distasteful at best and legally problematic at worst.Detesting Netanyahu is not a golden calf – it is a sincere sentiment, which Netanyahu could do something about if he really cared about all his citizens.As to whether Itai Zalait manifested detachment from what is going on in Israel, of course he did not. What he was trying to do was confront Israeli society with a mirror.However, since the Tel Aviv Municipality ordered the statue removed, and an over-zealous Tel Avivian toppled it before the artiest himself had a chance to remove it, we never really got a clear reflection. What we got was more like ripples after a stone is thrown into a pond.Is the statue as such art? I don’t think Zalait was thinking of the Israel Museum when he created it, and it is really difficult to judge his qualities as a sculptor based on it. Most of the public that came to see it appeared to have viewed it as good background for a “selfie.” It certainly photographed well.