Time for some healing – with humility!

The American Jewish love affair with liberalism continues, even as more liberals sour on Israel – and Clinton’s campaign manager told her “we shouldn’t have Israel at public events.” 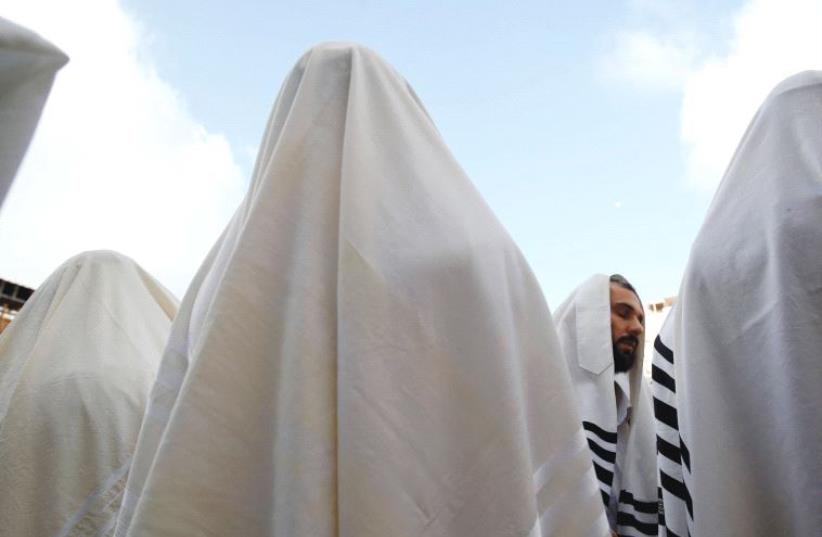 WAKE ME when the election is over. Jewish people have soul-searching to do now
(photo credit: REUTERS)
Advertisement
Not surprisingly, the raucous 2016 US election campaign left many people angry and frustrated, including Jews and those who try to understand the Jewish community.Republicans are frustrated. One Republican senator asked me, “What will it take for Jews to realize that we are their friends and the Democrats welcome their enemies?” Despite the Barack Obama-Benjamin Netanyahu tensions, despite the Iran deal and the settlement squabbles, on Tuesday, most American Jews voted Democrat. Moreover, with the Facebook co-founder Dustin Moskovitz’s $35 million gift leading the way, together, Hillary Clinton’s top-10 Jewish donors donated more than $110m. to her campaign.The American Jewish love affair with liberalism continues, even as more liberals sour on Israel – and Clinton’s campaign manager told her “we shouldn’t have Israel at public events.” Once again, American Jews proved to be more pro-choice than pro-Israel (but that doesn’t mean they were not pro-Israel too).Republican Jews are frustrated. Many Jewish conservatives were among the leading “NeverTrumpers.”They detested this celebrity billionaire with no ties to the ideological vision they developed over decades. Many also rejected Trump’s divisive, insulting rhetoric. To make things worse, when these Jews attacked Trump, the antisemitic trolls from the far Right attacked them, in the ugliest terms, proving that this election, antisemites found a home on the far Right among the anti-anti-Trumpers and among the far Left among the anti-Israel gang.At the same time, the many Orthodox Republican Jews who were not NeverTrumpers were aggressively pro-Trump and vehemently anti-Clinton. They couldn’t imagine how anybody who cared about the Jewish state could vote for Obama’s former secretary of state.Democratic Jews are also frustrated. They resented the venom with which many Orthodox Jews denounced Clinton – and many remain offended that Obama is called “anti-Israel” despite pumping billions in foreign aid into the Israeli economy.Culturally, of course, echoing the famous routine Lenny Bruce developed in 1961, contrasting what was “Jewish” with what was “goyish,” Republicans remained goyish, Democrats, Jewish. Think about it: Bill Clinton, Barack Obama and Bernie Sanders: Jewish. Mike Pence: Goyish. CNN and Saturday Night Live, Wolf Blitzer and Anderson Cooper: Jewish. Fox News and Megyn Kelly: Goyish.Oddly, the two main presidential rivals gave off mixed signals. Trump is partly Jewish: his riffs evoke a crazy Jewish uncle slinging his bombastic baloney while holding court at a Queens deli, but his boorishness and bullying reek of privileged WASP frat boy. Hillary Clinton as a former New York senator and friend to many Jews is partly “Jewish.” But she also transmits a vibe that had she married someone else, say Sidney Blumenthal, she could be a priggish, self-righteous Methodist leading the boycott campaign at her national church conclave.Amid all this frustration, we see that American Jewry shares a challenge with the American people – how to heal. More than that, we need to learn how to disagree civilly, how to fight about principles without perceiving opponents as evil.In fairness, neither Clinton nor Trump demonstrated much magnanimity during the campaign.While Trump was the most outrageous, bullying his way around, Clinton was no angel either. Her “basket of deplorables” line triggered enough anger to force her to backpedal. More disturbing, during one of the early fall debates, when asked which enemy she was most proud of, she answered: “Well, in addition to the NRA, the health insurance companies, the drug companies, the Iranians, probably the Republicans.”Rivals need not be enemies in a healthy democracy.Disagreements over policy need not lead to demonization. My liberal friends love to blame conservatives for being obstructionist and hostile.My conservative friends love to blame the liberal baby boomers for making politics personal, in every way, including when fighting. As a historian, I could offer all kinds of explanations. But as a citizen I am more concerned with how we go forward. Just as it shouldn’t take a Palestinian terrorist attack to unite Israelis, it shouldn’t take a 9/11 or a San Bernardino to unite Americans.Part of the problem is that modern political divisions often reinforce cultural and social differences.Just as Israeli elections pivot between Tel Avivi leftists versus right-wing settlers and Jerusalemites, the American election pitted “angry white males” supporting Trump against blacks, Hispanics, women, Muslims, immigrants, millennials. While all these categories overstate and reduce everyone to one dimension, it’s ominous that these various categories blur the political, cultural, social and religious/ non-religious. In healthy democracies, people from the same church vote for different parties. In healthy democracies, people from common ethnic backgrounds might vote competing class interests.Here, then, is the challenge for us all.First, a little humility. Much of the demonization of those who dare disagree with us comes from the arrogant assumption that we are not only correct but completely right and totally virtuous. Second, some nuance. Our extreme language, especially in the overheated blogosphere, leaves no prisoners – and when people do speak softly they are dismissed and ignored. And third, some context. We Westerners are surrounded by enemies. Even as we debate our own problems internally, by appreciating not just how evil some of our adversaries but how different their assumptions are, perhaps we can remember all that unites us, not just the many reinforcing identity dimensions that these days seem to divide us.The author, professor of history at McGill University, is the author of The Age of Clinton: America in the 1990s, published by St. Martin’s Press. His next book will update Arthur Hertzberg’s The Zionist Idea. Follow on Twitter @GilTroy.