In an effort to carry on the great tradition of Tikkun Olam (“repair the world”), the URJ is ironically driving our society – and our Reform Jewish community – into disrepair. 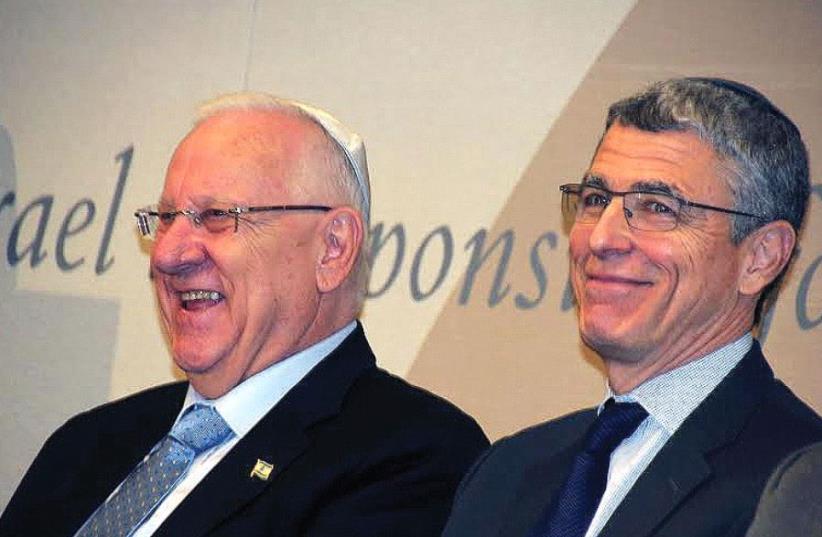 PRESIDENT REUVEN RIVLIN and Rabbi Rick Jacobs, the head of the Union for Reform Judaism, attend a meeting of American Jewish religious leaders in New York, in 2015.
(photo credit: COURTESY OF THE UNION FOR REFORM JUDAISM)
The Union for Reform Judaism is making it increasingly difficult for anyone but an extreme liberal to identify as a Reform Jew. It preaches tolerance and understanding, yet displays neither when it comes to its political advocacy.Rather than being tolerant or understanding of the significant plurality of its members who are not liberal Democrats, the URJ forces all members of Reform congregations to be dues-paying members of a left-wing advocacy organization called the Religious Action Center.Recent data tell us that 58% of Reform Jews identify as liberal; 29% as moderate; and 13% as conservative.Additional data tell us that Americans believe that our country is more divided than at any time in recent history. It’s no wonder, then, that as the Reform movement takes increasingly divisive positions, 28% of Jews who were raised Reform have abandoned Judaism entirely. Of course, it’s possible to conclude that even more members would have left Reform Judaism had it not become a left-wing interest group in an effort to stay relevant. In either case, it is clear that the Reform Jewish community can ill afford to alienate anyone, so why mix organized religion with divisive political advocacy? Nowhere is the disconnect between the URJ’s political advocacy and its members’ values more striking than when it comes to the scorched-earth world of confirmation battles. Nominees’ words are routinely twisted and their ideologies lumped into binary categories with no room for nuance or shades of gray.Favor school choice? According to the Central Conference of American Rabbis (a URJ group), you must not be committed to public education. In other words, either you favor improving public education or you support the right of parents to choose the best school for their children. They are mutually exclusive.If your relatives are not in favor of same-sex marriage, but you support your loved ones who are in a same-sex marriage and want them to have kids, the URJ can’t possibly trust you to make sure schools are welcoming and inclusive.And then there’s the immediate rush to judgment of Judge Neil Gorsuch. Within minutes of President Donald Trump’s appointment of Judge Gorsuch to the Supreme Court, RAC director Rabbi Jonah Dov Pesner stated, “We are greatly troubled by Judge Gorsuch’s record, which suggests that he may not have the attributes and values a nominee to the Supreme Court ought to have in order to mete out justice and interpret the laws that affect us all.”Never mind that Judge Gorsuch’s background and resume are virtually identical to Judge Merrick Garland’s, whose nomination Rabbi Pesner supported.The timing, tone and substance of the URJ’s statements on nominees make it clear that they are not issued in a vacuum. Rather, the URJ takes its lead from interest groups which will stop at nothing to destroy those it perceives may reach policy outcomes with which they disagree. This is not “inclusive” or “tolerant.” In fact, the rhetoric used by the URJ and its allies offends all but its most liberal members – and leaves moderate and conservative congregants increasingly uncomfortable with Reform Judaism.At the congregational level, the tone set by the URJ leads to sermons that, at best, make congregants uncomfortable – or at worst, just walk out.Unfortunately, some people aren’t coming back after they walk out. Rabbis are trained by the URJ to tell congregants that Reform Judaism has a great tradition of pursuing social justice, and that they don’t need consensus to advocate for causes with which some disagree. While both of those statements are true, neither gives Reform Judaism license to pursue tactics so divisive that a significant plurality of its congregants leave and never come back.In an effort to carry on the great tradition of Tikkun Olam (“repair the world”), the URJ is ironically driving our society – and our Reform Jewish community – into disrepair. Should Judaism inspire us to advocate for policies that we believe will make the world a better place? Absolutely. Should it be the vehicle for that activism, particularly when doing so in an intolerant and divisive manner? Absolutely not.The author is a business attorney in Grand Rapids, Michigan. He is a member of a Reform congregation and contributor to the Haym Salomon Center, a news and public policy group.