What Jonah tells us about antisemitism

Just as separation among us projects separation to all of humanity, unity among us will inspire the rest of the world to unite. 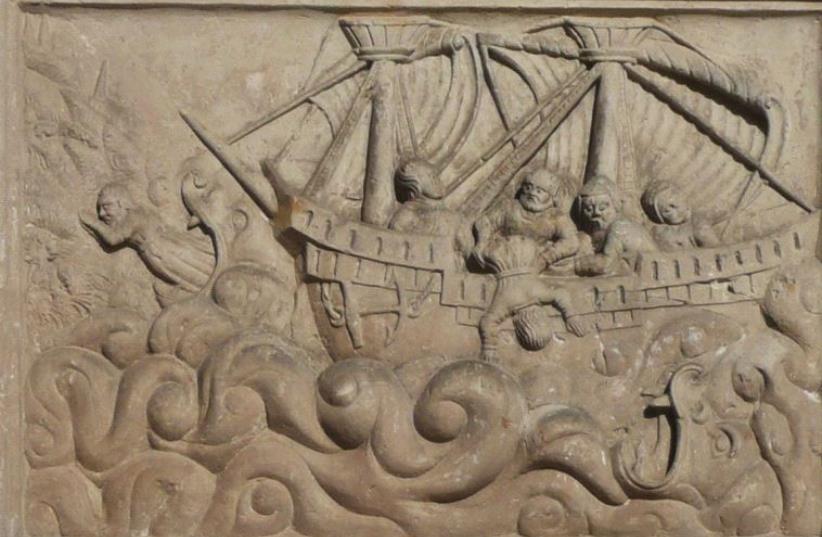 Book of Jonah, sandstone relief - Norbert Kaiser
(photo credit: Courtesy)
Advertisement
Two years ago to the day, I published an article in The New York Times (print edition) titled, “What We Jews Owe the World.” This year, come Yom Kippur (Day of Atonement), I’d like to share it with the readers of The Jerusalem Post, as I think that the message within can have a major impact on the future of our nation.Buying Our Way to Heaven

The holiest day of the year for the Jews is Yom Kippur, when we fast and pray. A key part of the prayer is reading the book of Jonah the Prophet. Interestingly, many observant Jews believe that buying the privilege to read the book will make them successful for the rest of the year.Naturally, only the wealthiest in the community can afford to compete for it. The sums vary according to the affluence of the community, and in some cases the privilege is sold for well over half a million dollars.Cracking the Code

What people are not aware of, however, is the real reason why the book of Jonah is so important. Kabbalists determined that this reading is the most important in the year because it details the code for saving humanity.Jonah’s story is special because it speaks of a prophet who first tried to dodge his mission, but finally repented. Another special aspect of Jonah’s story is that his mission was not to admonish the people of Israel, but to save the city of Nineveh, whose residents were not Jewish. In light of today’s precarious state of the world, we should take a closer look at this story and its meaning for each of us.Shape Up or Ship Out

In the story, God orders Jonah to tell the people of Nineveh, who became very mean to one another, to correct their relationships with one another if they want to survive. However, Jonah bailed out of his mission and took to the sea in an effort to escape God’s command.Like Jonah, we Jews have been inadvertently avoiding our mission for the past 2,000 years. And yet, we cannot afford to keep avoiding it. We have a task that was passed down to us when Moses united us into a nation based on the tenet, “Love your neighbor as yourself,” and it is our duty to set an example of unity for the rest of the world. Our forefathers, Abraham and Moses, wanted to unite all of humanity, but back then the world was not ready (for more on that, see my article, “Why Do People Hate Jews?”).That group, namely the people of Israel, must still become a role model to the world. Rav Kook, the first Chief Rabbi of Israel, put it poetically in his book, Orot Kodesh (Sacred Lights), “Since we were ruined by unfounded hatred, and the world was ruined with us, we will be rebuilt by unfounded love, and the world will be rebuilt with us.”Sleeping through the Storm

In the story, Jonah’s escape from his mission by ship caused the sea to roar and nearly sank the vessel. At the height of the storm Jonah went to sleep detaching himself from the turmoil and leaving the sailors to fend for themselves. Gradually, they began to suspect that someone among them was the cause of the storm. They cast a lot and the lot fell on Jonah, the only Jew on board.In many ways, today’s world is similar to Jonah’s ship. As Christine Lagarde, head of the International Monetary Fund, put it: “We are all in one boat, one global economy. Our fortunes rise together, and they fall together. ...We have a collective responsibility—to bring about a more stable and more prosperous world, a world in which every person in every country can reach their full potential.” Yet, the sea around us is raging, and the sailors, who are all of humanity, are blaming the Jew on board for all their troubles.Like Jonah, we are sound asleep. Though we are beginning to wake up to the existence of hatred toward us, we have yet to realize that not carrying out our mission is the reason for the hatred. If we do not wake up soon, the sailors will throw us overboard, as they did with Jonah. Yehuda Ashlag, author of the Sulam (Ladder) commentary on The Zohar, wrote in his essay, “The Arvut” (Mutual Guarantee): “It is incumbent upon the Israeli nation to qualify itself and the rest of the people in the world to evolve into assuming this sublime work of love of others.”

Jonah tells the sailors to throw him overboard, as only this will calm the sea. Reluctantly, the sailors obey and the storm calms. A whale swallows Jonah, and for three days and three nights he stays in its abdomen, introspecting his actions and decisions. He begs for his life and vows to carry out his mission.Like Jonah, each of us carries within something that is stirring up the world. We, the people of Israel, carry a method for achieving peace through connection. Unity is the very root of our being. This DNA is what makes us a people because we were declared a nation only after we pledged to be “as one man with one heart” and strove to love our neighbor as ourselves.” Today we must rekindle this bond because wherever we go, this untapped power is destabilizing the world around us in order to compel us to unite and reignite it.Just as the current separation among us projects separation to the whole of humanity, unity between us will inspire the rest of the nations to unite, as well. When we unite, it will endow humanity with the energy required to achieve worldwide unity, where all people live “as one man with one heart.” So the only question is whether we assume our responsibility, or prefer to be thrown overboard, only to subsequently agree to carry out our task.If we want to end our troubles, be rid of antisemitism and have a safe and happy life, we must unite and thus set an example of unity for all the nations. This is how we will bring peace and quiet to the world. Otherwise the nations’ hatred toward us will keep growing.
Now we see that when people pay so much for the privilege of reading the book of Jonah on Yom Kippur, they inadvertently state their support of the mission of the Jewish people toward the world: to be a light unto nations by showing an example of unity and connection. To conclude, let me quote once more the great Rav Kook: “Any turmoil in the world comes only for Israel. Now we are called upon to carry out a great task willingly and mindfully: to build ourselves and the entire ruined world along with us” (Igrot [Letters]).Michael Laitman is a Professor of Ontology, a PhD in Philosophy and Kabbalah, an MSc in Medical Bio-Cybernetics, and was the prime disciple of Kabbalist, Rav Baruch Shalom Ashlag (the RABASH). He has written over 40 books, which have been translated into dozens of languages.