What did the UN Security Council resolution leave out?

Those interested in shoring up stability and preserving any hope of reaching a resolution to the Israeli-Palestinian conflict would do well to recognize Gaza’s isolation. 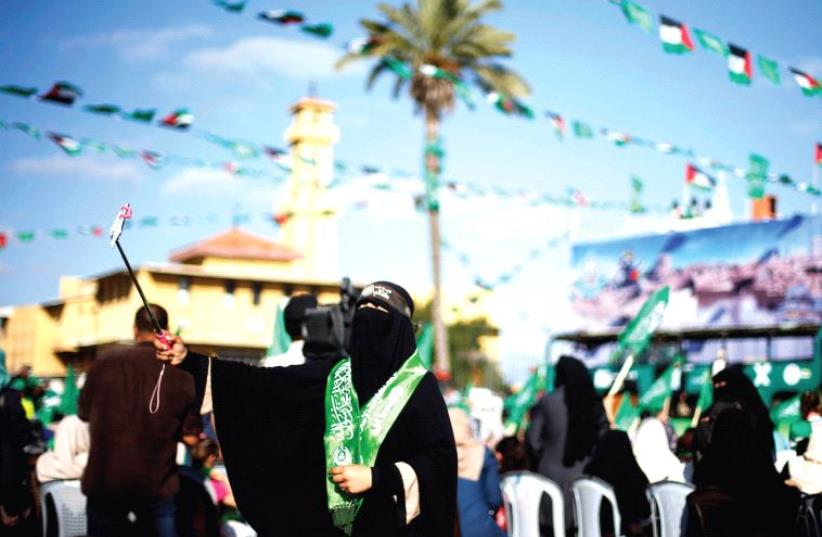 A Palestinian woman takes a selfie during an anti-Israel rally in Gaza City
(photo credit: REUTERS)
The responses by Israel’s government to the United Nations Security Council resolution passed late Friday provide all the evidence one needs to understand that Israel has no intention of ending the occupation anytime soon. Recently proposed legislation would even set a new precedent toward de facto annexation of the West Bank.Across the pond, United States President-elect Donald Trump’s next steps regarding the Israeli-Palestinian conflict are anyone’s guess but should be everyone’s concern.Continued and perhaps indefinite rule over the West Bank is made possible by maintaining the isolation of Gaza and its now two million residents. The desire to maintain a demographic balance in favor of a Jewish majority depends on “removing” the residents of Gaza from the calculation. Or as David Friedman, President-elect Donald Trump’s choice for ambassador to Israel, put it bluntly: “The evacuation of Gaza had one salutary effect: it took two million Arabs out of the equation.”Members of Israel’s government and Friedman have done us the favor of articulating what was already happening through restrictive access policy on the ground.While the political rupture of the Palestinian territory continues, Israel’s policy of separation has meant that for the past 16 years, students from Gaza cannot study at West Bank universities, families cannot reunite, and those seeking economic opportunity cannot relocate for work, except in one direction – from the West Bank to Gaza.Restrictions on trade, cultural life, and religious worship undermine the ties between Palestinian civilians and civil society across the Palestinian territory, which, absent a solution to the political fragmentation of the Palestinian territory, help provide people with a sense of community and ensure personal well-being.The divide created between the West Bank and Gaza is no coincidence and not related to legitimate security concerns only, of which there are certainly many. Rather, there is a political vision that seeks to fragment the Palestinian territory and thus undermines the rights dependent on access – the right to family life, to livelihood, to education and yes, also to self-determination.Restrictions on travel are too far-reaching to be explained by security concerns alone and they precede Hamas’s takeover of Gaza, often cited as a justification for the closure.Given comments by Prime Minister Benjamin Netanyahu that Hamas is holding the population of Gaza hostage and that Israeli doesn’t seek to punish civilians in Gaza, it’s a wonder why Israel would continue to enforce sweeping travel restrictions on those same civilians.Friedman’s comments represent an unsettling departure from international consensus and international law, which recognize the Palestinian territory as a singular unit.Reports by Israeli human rights organization Gisha and others have shown repeatedly that a viable solution to the conflict and respect for human rights are dependent upon preservation of that contiguity.The Security Council focused on the settlements, but it’s clear that Gaza’s isolation is the flipside of the coin.Without it, the push for indefinite rule over the Palestinian population in the West Bank would not possible, which is exactly the point.Those interested in shoring up stability and preserving any hope of reaching a resolution to the Israeli-Palestinian conflict would do well to recognize that Gaza’s isolation, like the settlement project, moves us further and further away from our goals.The opposite, respect for human rights, including facilitating the kind of movement and access that enables development, expands opportunities, and thus unlocks the potential of young people in Israel and in Palestine is the best way to ensure a better future for us all.

The writer is the executive director of Gisha – Legal Center for Freedom of Movement, an Israeli human rights organization. She is both an Israeli and American citizen.
Subscribe for our daily newsletter