Modern Orthodox Judaism demonstrates the triumph of the theory that one can observe Halacha, or Jewish law, and simultaneously integrate into modern societies. 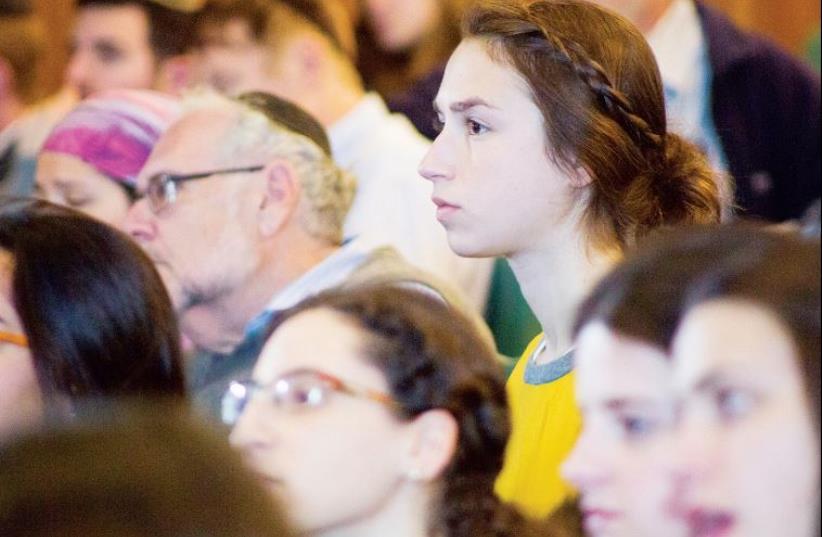 A panel titled “Modern Orthodox Education in 21st Century Israel and America,” held at Heichal Shlomo
(photo credit: Courtesy)
Advertisement
As any college student does when assignments and finals begin piling up toward the close of the semester, I parked myself in the library and procrastinated on my computer.After sifting through X Factor auditions and NBA highlight reels, I fell upon an episode of The Tonight Show in which Jimmy Fallon was interviewing a humanoid robot named Sophia. As Sophia shared with the audience her comedic plan for world domination, I became infatuated with her quick wit and ability to engage with the host.All of us are well aware that the turn of the millennium was accompanied by groundbreaking innovation in technology, enhanced accessibility, and an augmented curiosity for the unknown, yet people tend to repeatedly neglect technology’s duplicitous nature. Groundbreaking technology can be used to enhance our lives or generate greater evil. Accordingly, it all hinges upon our approach.As a Modern Orthodox Jew, my interaction with technology is unique, but a continuous challenge considering I strictly avoid the use of electronics on Shabbat and other holidays. Modern Orthodox Judaism demonstrates the triumph of the theory that one can observe Halacha, or Jewish law, and simultaneously integrate into modern societies.In America, Modern Orthodoxy was the supply to the demand of Jews who refused to lose their identity but also understood the value of secular studies, a strong sense of Zionism and a commitment to equality of education for men and women.Our dualistic ideology and ability to commit to opposing schools of thought influences our implementation of technology. To claim a generalized approach, the accommodation of innovation seems to depend on its ability to further spiritualize our religious experience.Evidently, Judaism has welcomed previous technologies based on this principle. No institution champions the heart of the movement better than the Zomet Institute, an organization dedicated to developing solutions to conflicts between technology and Jewish law. It is in its merit that I don’t have to walk up 14 flights of stairs on Shabbat, and my grandparents can ride electric scooters to the synagogue.The newest challenge to the intricate balance we so passionately preserve is the advent of driverless cars. According to Halacha, driving is prohibited on Shabbat for two reasons: igniting an internal combustion engine, and the labor required to drive the vehicle. So, if I am engaging in neither of those actions, why are rabbis speaking out against their use? Entertaining the Modern Orthodox philosophy strengthens both sides of the self-driving car debate: those in favor might argue that the driverless car will enable those who live far to attend synagogue or enjoy family gatherings, encouraging a thriving Jewish community.Those opposing might fear it could theoretically foster religious leniency, allowing for activities such as going to the beach or driving to the mall, essentially exploiting the tech for personal gain.A number of articles have debated for and against the introduction of this fascinating technology to the world of Judaism, yet rabbinical authorities struggle to reach a solution. The disassociation lies not in the interpretation of Jewish law, rather in the frightening shift in modernity this vehicle represents.Technological advancements are a prerequisite to the fast and changing face of modern life. The rapid and distributive nature of innovation undoubtedly proves difficult for halachic observations, but that merely scratches the surface in relation to the degree of change it will bring to Judaism. Innovation brings about new ways of seeing, communicating, but more importantly, envisioning.Yes, we can review technology’s initial and immediate outcome, but it would be ludicrous not to acknowledge the multiplying repercussions it has on our societies.Leaders of the scientific community boast the entrance of our society into yet another technological revolution. The first revolution employed the energy of water and steam to drive machinery, the second introduced electricity to the playing field for mass production, and the third represented the shift from mechanical to digital.Now, we are entering into a new revolution distinguished by breakthroughs in biotechnology, artificial intelligence, robotics and autonomous vehicles.Technology is rapidly shortening the distance between human and machine, leaving us the choice to either embrace this change or reject it completely. What happens, however, when technology develops at a much faster rate than Modern Orthodoxy can adapt? The Modern Orthodox approach can only accommodate so much technological revolution without compromising centuries-old traditions. Will the differing speeds render the movement akin to the rigid, perennial lifestyle of the ultra-Orthodox? The driverless car, perhaps, is the earliest indication that Modern Orthodoxy’s delicate balance is destabilizing.Change, however, does not appear to be a defining characteristic of the Modern Orthodox world. After all, how can orthodoxy ever be modern? How can what is established as right and true be accommodating to alternative interpretations of what right and true represent? Herein lies the age-old Modern Orthodox battle. Change requires adjustment, adaptation. Modern Orthodoxy’s continuous struggle with that principle has steered us fortuitously to our current and thriving state but now, as a community, we stand before yet another uncharted enigma. Accordingly, the magnitude of this decision lies in the undeniable fact that it will map our trajectory into the future. How we approach the driverless car will determine how we approach our transforming world.

The author is a former IDF soldier who recently began studying economics at Columbia University in New York.