Zoabi: Kidnappers are not terrorists, they're fighting occupation

Liberman responds calling Balad MK "a terrorist"; Regev: She's a traitor and should be deported to Gaza. 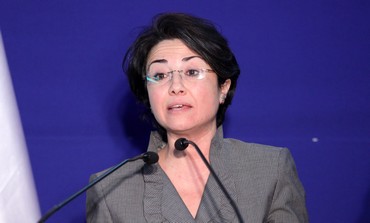 The kidnappers of three yeshiva students last weekend are not terrorists, MK Hanin Zoabi (Balad) said Tuesday.
"They're people who don't see any way to change their reality and they are forced to use these means until Israel will wake up a little, until Israeli citizens and society will wake up and feel the suffering of the other," Zoabi said in an interview on Radio Tel Aviv, adding that the kidnappers live under occupation.
"So an Israeli MK is openly justifying the kidnapping of Israeli boys?" the interviewer, Sharon Gal, asked.
"I'm not surprised at all," she responded.
"I'm surprised you're still walking around freely," Gal said, and Zoabi hung up on him.
Immediately after the interview, Foreign Minister Avigdor Liberman said "not only are the kidnappers terrorists, Hanin Zoabi is a terrorist too."
"The fate of the kidnappers and the fate of the inciter who encourages kidnapping Hanin Zoabi should be the same," Liberman added.
Soon after, Knesset Committee for the Advancement of the Status of Women chairwoman Aliza Lavie (Yesh Atid) asked Zoabi in a committee meeting: "How are [the kidnappers] not terrorists?"
"Shut up, you don't deserve to be a committee chairwoman. Are you policewoman? You are a racist," Zoabi shouted in response.
Culture and Sport Minister Limor Livnat said she plans to demand Attorney-General Yehuda Weinstein review what Zoabi said, which, she believes, breaks the law against incitement to violence or terror.
The law states that it is illegal to openly "call to act violently or commit an act of terror or praise, express admiration or encourage violence or terror, or support or identify with it."
"Zoabi is not worthy to serve as an MK in Israel and she should be put on trial," Livnat said. "When Zoabi participated in the Gaza flotilla along with armed terrorists, she said it was humanitarian action. Now she says kidnapping boys is legitimate and not terror. Put her on trial now!"
Housing and Construction Minister Uri Ariel said Zoabi is continuing in her tradition of supporting terrorists and that she is unworthy of being an Israeli citizen, let alone a member of Knesset.
"Zoabi is a prize for terror inside the Knesset," Ariel wrote on Facebook. "This is a situation that would not be accepted in any democratic country in the world."
Knesset Interior Committee chairwoman Miri Regev (Likud Beytenu) said "Hanin Zoabi is a traitor and should be deported to Gaza."
"She who identified with terrorists on the [2010 Gaza flotilla ship] Marmara, once again identifies with terrorists from Hamas who kidnapped our three boys," Regev stated. "I am not surprised to hear her statement. How could a traitor like her blame [the kidnappers]? After all, she's from their milieu."
According to Regev, Zoabi belongs in Gaza because "once a traitor, always a traitor."
Deputy Defense Minister Danny Danon recounted how he successfully passed a motion to have Zoabi banned from running in the 2013 election in the Central Election Committee, but the vote was overturned by the Supreme Court.
"The embarrassment of having [Zoabi] in the Knesset must end," he said.
Knesset Finance Committee chairman Nissan Slomiansky (Bayit Yehudi) said he plans to propose a bill that "would not allow public officials in general, and specifically Hanin Zoabi, to stay in their jobs after such outrageous words of incitement."
A Bayit Yehudi spokesman said Zoabi's presence in the Knesset proves that Israel is the most tolerant country in the world toward minorities and terror-supporters.
"Just as we don't see al-Qaeda representatives in the US Congress inciting to kill Americans, the time ha come for the Israeli authorities to take action toward Zoabi," he stated.
The comments came a day after the Balad MK criticized her 17-year-old relative Mohammed Zoabi who posted a video online calling to bring back Gil-Ad Shaer, Eyal Yifrah and Naftali Fraenkel, who were abducted while hitchhiking in Gush Etzion Thursday night, and calling the Palestinian Authority terrorists.
Zoabi said in the radio interview that her relative is from a broken home and is "twisted," disconnected from his identity as an Arab. She also pointed out that he goes to a Jewish high school.
Meanwhile, Zoabi the high school student wrote a letter to supporters that he is disconnecting from social media and keeping a low profile, as he received death threats in response to the video.