A short drive from almost anywhere in Israel, Ashdod offers one of Israel’s most beautiful beaches.

By BARRY DAVIS
NOVEMBER 7, 2012 14:44
ashdod
(photo credit: Courtesy)
When we think about getting away from it all and chilling out for a weekend or so in some relaxing ambience, possibly with the added pleasure of a sea breeze, we tend to think south, far south. While Eilat has much to offer, Ashdod has a few things going for it as well, and all within a comfortable ride from the center of the country.For starters, there is the beach, with around 10 kilometers of white sand gleaming by the Mediterranean Sea. Over the years the local municipality’s Tourism Promotion Department, through the Hofit tourism development company, has invested heavily in the seafront. The city’s long coastal strip offers plenty of room for sunbathers to soak up the rays and cool off in the water, naturally with a commensurate selection of eateries, showers and changing room facilities.Ashdod was founded in 1956. Its first settlers were 22 families from Morocco, followed by another small influx of Egyptian Jews. The city began to grow more rapidly, and by the early 1960s the local and state authorities started to think about making the most of the developing town’s seafront position. Ashdod Port, the country’s largest commercial facility, was inaugurated in 1963. Anyone interested in getting a more in-depth handle on the history of the port and its contemporary activities can do so at the visitors’ center, which screens films about the port daily and operates tours of the facility.Today, Ashdod also boasts a handsome marina with mooring facilities for more than 500 boats. There are also commercial sea craft services on offer that take groups of varying sizes for day cruises up and down the coast, as well as vacationers on international cruises.The seafront also has an expansive tourism complex, complete with hotels and commercial centers 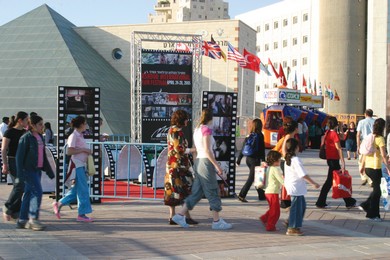 But the pride of Ashdod’s outdoor aesthetic ethos may well be the almost 300 sculptures dotted around the city’s parks and streets, in addition to the interior of its cultural institutions. One highly impressive beachfront artistic installation features internationally renowned artist Yigal Tomarkin’s Three Scholars iron and steel work. Tomarkin has a reputation for strong statements, often with some political slant and some whimsical side to them. This work comprises three figures designed to portray members of the political hierarchy steadfastly hanging on to their seat of power. Meanwhile, the Ashdod Museum of Art in the municipality’s Monart Center houses Israeli and international contemporary works of art in its 12 galleries and two halls. Guided tours and other activities are available daily.Ashdod’s population took an incremental leap with the mass aliya from the former Soviet Union in the early 1990s, almost doubling within a fouryear period. Edward Dulcart settled in the city in 1991 after making aliya from St. Petersburg. Dulcart, who has a PhD, now devotes his working hours to art, and several of his sculptures adorn the municipal plaza and other spots around the city. His Twelve Tribes granite and Hebron stone creation, for example, offers visitors to the municipality an intriguing and attractive entry to city hall. Other statues and works of art can be found at Youth Square, at the junction of Ben-Ami Boulevard and Moshe Dayan Street. The evocative winged figure there was created by Ofra Zimbalista in memory of local resident Marion Berkovich, who was killed in the Second Lebanon War, while Yael Artzi’s monumental chalkstone work Waterfall, next to the Lido Beach, feeds off the nearby sea vibes.The beach is also the site of a colorful bustling market, which takes place in the large parking lot there every Wednesday. The weekly event offers locals and tourists a wide range of fruits and vegetables, arts and crafts items and toys, as well as clothes and footwear. 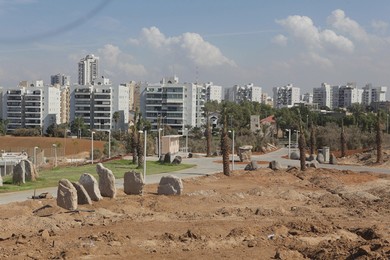 If you’re looking to get your bearings in the locale, you might want to pop along to Givat Yona. The hilltop park rises 53 meters above the surrounding area, the highest spot in the city, and has a fetching lighthouse. The park affords views of Ashdod Port, the Lahish River, many of the city’s districts and, on a clear day, you can see a long way up and down the coast to Ashkelon Beach in the south and up to Palmahim Beach in the north. Tradition has it that Jonah the prophet is buried there, and there is a makam (Arab sacred place) marking the burial spot.Besides contemporary art works, Ashdod has an abundance of archeological sites, with finds on display in local cultural institutions. The city’s origins can be traced back to the Paleolithic Era, and there is mention of Ashdod as a Canaanite fortress city dating back to the 17th century BCE. The most prominent reminder of the city’s distant past is the remains of the Ashdod Yam fortress, which dates back to the early Muslim era of the 8th century CE. There is plenty to see at the site, and the outer walls still stand to quite a height. There are remains of pillars, capitals and other architectural features around the fortress site, and there are plans to establish a marine archeology center there.Nearby is the city’s flagship outdoor facility, the Ashdod Yam Park. The 20-hectare leisure and entertainment park is being developed and is due to open in January. When completed, the park will incorporate a wide range of sports facilities, a waterfall and an artificial lake and a restaurant. Biblically themed sculptures by internationally renowned artists will adorn the park’s lawns. The centerpiece of Ashdod Yam Park is an 8,500-seat amphitheater that opened in the summer. 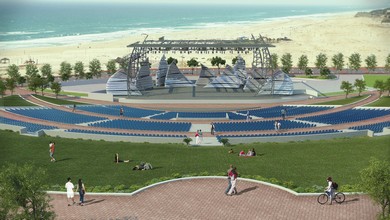 Lahish Park is also well worth a visit, with its river surrounded by a wildlife area. There is a small zoo with an animal petting spot. An adventure park for adults and children over 14 is under construction.While the city’s proximity to the center of the country makes it a convenient day trip destination, there is also local accommodation on offer for those who want to make a longer stay of it. The local hotel scene is due to be significantly upgraded next year when the West Hotel opens. A water park is also in the pipeline, with the opening planned for 2014.