Jesus and the Jordan River

Visit one of the most famous biblical Christian sights where Jesus was said to have been baptized.

By BEATA ADONIA, TRAVELUJAH
JANUARY 13, 2013 17:17
Jordan RIver baptism
(photo credit: Travelujah)
Advertisement
For further information about Christian tourism and Holy Land tours contact info@travelujah.com.The Jordan River flows through the Jordan Rift Valley into the Kinneret and then continues down into the Dead Sea with no outlet. It is a place of many important biblical events. However, for most Christians the first association with the river would be the scene of Jesus Christ being baptized by John the Baptist.According to the Christian faith, the Jordan River is considered the third most holy site in the Holy Land, just after Nativity Grotto in Bethlehem and Golgotha in Jerusalem, because it is the site of the most important event of Jesus’ life - his baptism and beginning of his ministry. 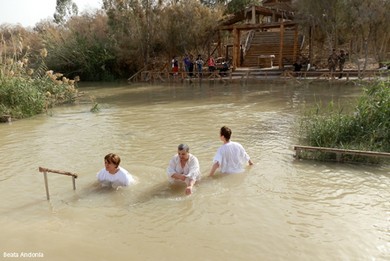 It was John the Baptist who decided to baptize people in the Jordan River. Many scholars think that he might have been influenced by the Essens, who like John, were leading an ascetic life in the wilderness of Qumran or EinGedi. One of their principal religious rituals was a daily immersion in water to regain purity. The Jordan River represented a perfect mikva of continuously running water.
John is also commonly referred to be a precursor of Jesus, and the Gospel of Matthew describes him as the person mentioned by Isaiah in his prophecy: “A voice of one calling in the wilderness, ‘Prepare the way for the Lord, make straight paths for him.’” (Isaiah 40:3) John also announced that Christ - the Messiah is coming, with the words: “I baptize you with water for repentance. But after me comes one who is more powerful than I, whose sandals I am not worthy to carry. He will baptize you with the Holy Spirit and fire.” (Matt. 3:11) 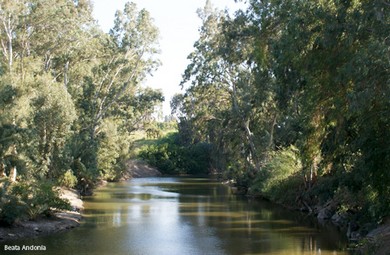 Jesus’ Baptism and its meaningChrist was baptized in the Jordan River by John the Baptist. Baptism with water, practiced since the beginning of the Church, represents admission into the Christian community and is essential for salvation. "Truly, truly, I say to you, unless one is born of water and the Spirit, he cannot enter into the Kingdom of God." (John 3:5) In Christianity, baptism is a sign of “repentance and forgiveness of sins” (Mark 1:4) and the beginning of the life in Christ within the Church. Christians are baptized in the name God: “Father, and the Son and the Holy Spirit” (Matt. 28:19). As well, through baptism Christians associate with the death, burial and resurrection of Jesus: “And this water symbolizes baptism that now saves you […] by the resurrection of Jesus Christ.” (1 Peter 3:21)Different Christian denominations have various baptismal practices. Orthodox and Catholic Christians receive the sacrament when still infants. The Catholic baptism is done by effusion, meaning pouring water over someone’s head. However, according to the rituals of the Orthodox and some other Eastern Churches, a baby would be completely submersed in water. Within the Anabaptist (baptised again) and Baptist practices, a person would receive baptism as an adult in order to understand the significance and be aware of accepting Christ as a Saviour.Site of Jesus’ Baptism - Qasr el Yahud

Qasr el Yahud, one of the most important sites for Christian pilgrims visiting the Holy Land, is identified as the traditional site of Jesus’ baptism. The place is located in the wilderness of the Jordan River Valley, north of the Dead Sea and east of Jericho. Remains of a Byzantine church from the 4-5th century, still visible on the site, point to the ancient tradition associate with this site. 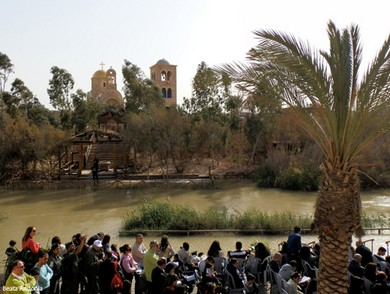 To be baptized in the same place where Jesus was baptized, is a uniquely spiritual moment for the Christian believer. Qasr el Yahud is furnished with facilities required to assist visiting pilgrims and enhance their experience. There are on site showers, facilities for prayer, wheelchair access and improved car parking. Baptismal robes are available for NIS 35.The Baptism of the Lord Celebration is a feast commemorating the baptism of Jesus in the Jordan River by the John the Baptist. In the Holy Land, this event takes place at Qasr el Yahud.According to the Catholic Church’s tradition, the holiday is celebrated on the first Sunday after the feast of Epiphany. This year, Catholics will make a pilgrimage to the site on January 13 and hold a mass in a chapel on the riverbank.January 18 and 19 will mark the Feast of Theophany, which for the Eastern Churches denotes Christ’s baptism and first revelation as the Son of God and the revelation of the Holy Trinity.  On the morning of January 18 a procession of Eastern Orthodox clergy and pilgrims would follow down to the river bank, where the celebration will be held. The Patriarch, by submerging the cross in the river will purify and consecrate its water, which then shall be sprinkled on the crowds of faithful. In the afternoon the Ethiopian Orthodox Church will celebrate the Baptism at the site. On the morning of January 19, the baptismal celebrations will be held by the Coptic Orthodox and the Syrian Orthodox Churches. 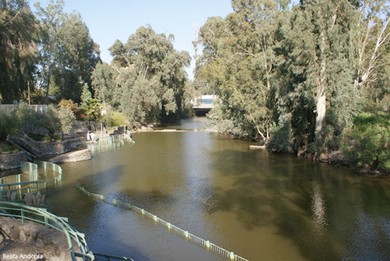 There are other biblical events also associated with Qasr el Yahud. Joshua, while leading the Israelites crossed the Jordan River there, and entered the Land of Canaan (Joshua 3). In addition, Elijah the Prophet ascended to heaven on a fiery chariot (2 Kings 11) at the site of Qasr el Yahud.Qasr el Yahud is just north of the Dead Sea. If driving from Jerusalem, take the Route 1 towards Jericho’s bypass road, then turn north on the Route 90, drive approximately 2.5 km until you reach a grove, and then turn east in the direction of a sign saying Qasr al-Yahud. Currently, there is no public transportation which goes exactly to the site. Hiring a taxi driver or a private tour could be an option.Opening hours:Qasr el Yahud is open daily from 8 a.m. till 5 p.m. in the summer and till 4 p.m. during the winter, except on Fridays from 8 a.m. till 3 p.m. (summer) or till 2 p.m. (winter). There is no entry fee. Pilgrims are advised to call before visiting on (02) 650-4844.

YardenitMany pilgrims come to the Holy Land especially to be baptized in the Jordan River, thus the site of Yardenit was established in 1981 as a result of the closing of Qasr el Yahud, which occurred at the time due to the unstable political situation in the region. This picturesque baptismal site, located south of the Jordan River's outlet from the Sea of Galilee, welcomes everyone who would like to walk in the footsteps of Jesus and follow Jesus’s life by experiencing the baptismal waters. 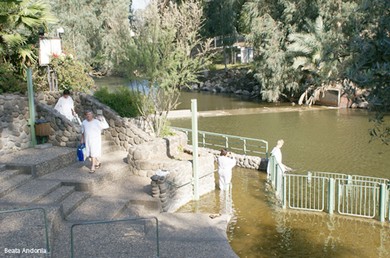 “The Wall of New Life” is Yardenit’s special feature that consists of panels in multiple languages that portray a verse from Mark describing the baptism of Jesus. "In those days Jesus came from Nazareth of Galilee and was baptized by John in the Jordan. And when he came up out of water, immediately he saw the heavens opened and the Spirit descending upon him like a dove, and a voice came from heaven; "Thou art my beloved Son, with thee I am well pleased." (Mark 1:9-11) “The Wall of New Life” is dedicated to all who have received baptism at this place, and symbolizes the beginning of their new life. 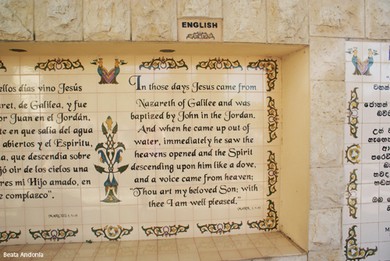