Off the Beaten Track: Following the Tenth Legion 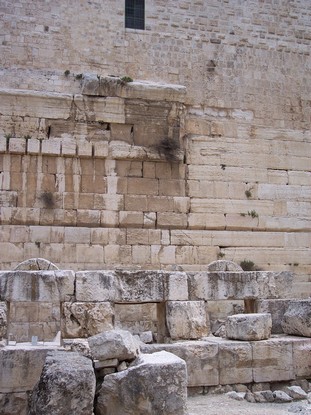 During the Titus led, Tenth Legion’s siege of the Temple Mount complex, the Temple itself caught fire and the Jewish priests threw the keys to Jerusalem and the Temple into the burning ambers of the Temple proclaiming “Master of the Universe! Since we have not been privileged to become Thy faithful ministers, let these keys been entrusted to Thy hands!” Go back through the alley the way you came. When you see daylight, the complex across the street is the “Tower of David” or “The Citadel”. Walk up to the moat. You can clearly see the different styles of stones in layers, the oldest being Maccabean, the finely cut rectangles of King Herod and later period stones including Arab, Crusader and Mamluke, all the way up to the Ottoman turrets. Titus kept this tower intact as a monument to his troops' success during this first Jewish revolt, and used it as the base for his tenth Legion. One of the causes of the Jewish War was the Roman brutality of the Jews. Florus, 1st century Roman Protectorate of Judea was known to have crucified many Jews here as Josephus writes “The soldiers… caught many of the quiet people, and brought them before Florus, whom he first chastised with stripes, and then crucified. Accordingly, the whole number of those that were destroyed that day, with their wives and children…was about 3,600.”Continue around the bend of the main street passing the citadel; pass the police station and some very cool Armenian shops, pubs and restaurants. Until you get to an arch passing over the main road. Beyond the arch to the left is the Cathedral of St. James and well worth a visit, but we are taking a left before the arch onto St. James Street. Wind down St. James Street and cross through an intersection and descend down into the Jewish Quarter. Notice how the buildings change from medieval to twentieth century. This is due to the fact that the Jordanian army and Palestinian residents completely destroyed the Jewish Quarter after ethnically cleansing it of Jews in 1948. Only did the capture of the quarter in 1967 lead to the more recent construction, albeit almost every stone and wall that was still standing was incorporated into the new construction. 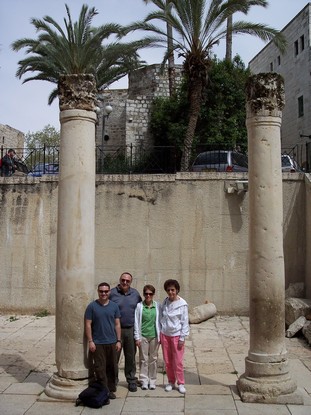 St. James St. turns into Or HaHaim Street and to your right is the Old Yeshuv Court Museum which is well worth a visit to see what Jewish life was like in the Old City between the 16th and 20th centuries. The museum is built in the house where The ARI, Rabbi Itzik Luria was born and where Rabbi Mordechai Weingarten lived during the siege of the Jewish Quarter in 1948. On the night of the 13th of May, the Rabbi heard a knock on his door. When he answered it he saw a Regiment of British soldiers lined up in formation. Their officer presented Rabbi Weingarten with the keys to the city before withdrawing from Jerusalem forever. Could this finally be a sign that the messianic age was upon us, thought the Rabbi? As the Battle of Jerusalem began the rabbi said a prayer, “Blessed are You, Lord our God, King of the universe, who has kept us alive, and sustained us, and enabled us to reach this moment.”Walk down to the bottom of the street to Habad Street. Down the stair and to your right is a pit with a row of columns. Stand on the platform over the pit. From the columns to the right are a series of arched rooms. The columns once supported a wooden roof that stretched to the rooms. This was the sidewalk and shopping mall of second century CE Jerusalem called the Cardo. Only half of the street is visible to the left of the pillars and the rest is buried under 1800 years of rubble to which the 21th century street is paved. Behind you are stairs going down into the Cardo. Go down, underground and you will come out into the recently refurbished Cardo built by Hadrian around the year 135 CE.After the Hadrian Decrees, banning the practice of Judaism in the Roman Empire, were enacted, the Jews again, revolt from Rome, led by Rabbi Akiva and his general Bar Kochba who was declared Messiah. Initially, the Jewish army expelled the Roman forces, but about three years later Hadrian led a push against the rebels led by the Tenth Legion. Two thirds of the Roman Army was needed to bring this revolt to its heals and after the war Hadrian destroyed Jerusalem and rebuilt it again this time as purely pagan city. This Cardo was his main street of the city. The Cardo was later refurbished by the Crusaders and then by the Israelis. Take some time to explore the shops. Exit the Cardo and make your way to the Hurva Square and then down towards the Western Wall. Do not enter the Western Wall Plaza but turn right, cross the road by the traffic circle and go down the stairs to the incredible archaeological gardens at Davidson Center. Here you can explore the ruins of the structures in and around the Temple Mount that were destroyed by Vespasian, Titus and the Tenth Legion. The museum and movie there are also well worth a visit. Joe Yudin became a licensed tour guide in 1999. He completed his Master’s degree at the University of Haifa in the Land of Israel Studies and is currently studying toward a PhD.