Off the Beaten Track: Swimming in the Shuyerach Spring

Take a picnic basket and explore this secret pool hidden among the trees in the Golan Heights near the Kinneret.

By JOE YUDIN
OCTOBER 6, 2011 16:49
Kinneret at sunset 311
(photo credit: Joe Yudin)
Advertisement
Joe Yudin owns Touring Israel, a company that specializes in “Lifestyle” tours of Israel.Over the weekend I decided to take my family on a short jeep tour and picnic by a spring on the southern part of the Golan Heights. We set out early and headed towards the Jordan Valley and continued north on Route 90 to Lake Kinneret at Tzomeh Junction and right on Route 92. At Ma'agan Junction we continued straight on seldom-traveled Route 98 in the direction of Hammat Gader. This road takes you on a beautiful scenic route high above the Yarmuk River on the border of the Hashemite Kingdom of Jordan in the Mountains of Gilead. Over 450 million cubic meters of water flows through the Yarmuk annually. 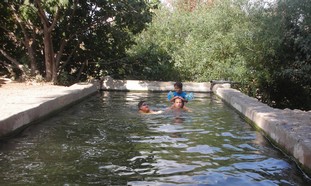 According to early Arab sources, the Battle of the Yarmuk in August of 636 AD led to the capture of Syria & Palestine by the Arabian Caliph Umar ibn al Khattab, who was previously an adviser to the prophet Muhammad before his death. The victory here at the Yarmuk led to the withdrawal of Byzantine forces from the Middle East and the eventual conquest of it by the combined Arab armies, turning the Judeo-Christian Middle East into the land of the newest monotheistic religion: Islam. Egypt, Persia and North Africa would soon follow and invasions & conquests into Europe would continue by various Islamic rulers for the next thousand years.Wind your way up Route 98. Looking down in the valley at the river, see if you can spot the ruins of a bridge which was destroyed by the Haganna on “The Night of the Bridges” June 16, 1946. Almost every bridge leading to Palestine was blown up to send the British government of mandate Palestine a message, that it was time to go and complete their mandate to create a Jewish home in Palestine. This bridge was part of the Hejaz Railway that ran from Damascus in Syria to Medina in Arabia. Eventually you will get to a pillbox and various bunkers on both sides of the road. This is the international border between the French and the British as outlined in the Sykes-Picot agreement of 1916. The fortifications were built during World War II when Vichy France controlled Syria. This area was included in the borders of the State of Israel in 1948 but captured by the Syrians in 1951, as well as other areas of the Golan after a series of attacks by both sides. 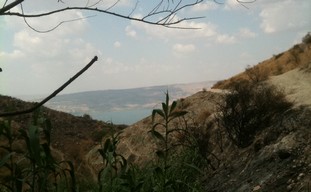 Go left at Hamat Geder Junction staying on Route 98 for approximately 4.5 km. After a sharp right turn there will be a turn off the road to the left onto an unpaved road. The road is marked by green trail markers for off road vehicles. Take this road down, turning sharply to the left. Do not take any side roads. After 1.8 km make a right-hand turn and then go 300 meters until the road turns chalky white and bumpy. After an additional 450 meters you will come to a fork in the road, if you don’t have a jeep, park here and continue on foot. Continue down the road until you come to a small “parking lot” near large stones with a clear trail marker taking you up stairs by foot. Take your picnic basket and things for a walk on this trail for five minutes to the clump of trees to your east. In the midst of the trees is the beautiful spring of Sharir, locally known as the Shuyerach Spring. 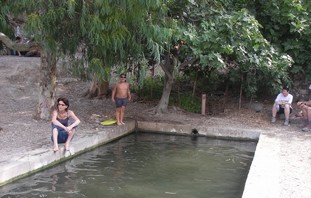 The spring served a nearby Arab village who built the pool in 1944, to capture rainwater, but soon thereafter was neglected and fell into disrepair. The pool was discovered by Yerach Paran from nearby Kibbutz Haon in the year 2000 and he began to restore the pool and plant the various trees around it creating this perfect spot for a picnic. The water is clean, if a little cool. After enjoying the spring, pack up the picnic equipment and head back to your jeep. Continue all the way down the Golan, enjoying the incredible views of Lake Kinneret, the Jordan Valley and the Galilee, until you get to a fork in the road by Kibbutz Haon’s banana fields. Take the road to the right and you will eventually get to “The Memorial of the Turkish Pilots."In early 1914, two Ottoman military aviators set out in a Blériot XI model monoplane (one fixed wing, as opposed to biplane) from Istanbul to Alexandria, Egypt. This was the same type of plane used by Louis Blériot to cross the English channel in 1909. After refueling in Damascus and taking off for Jerusalem their plane went down right here. Pilot Navy Lieutenant Fethi Bey and his navigator, First Lieutenant Sadık Bey were killed, they are buried in Damascus. Make your way on any one of the many trails down to route 92 between Kibbutz Haon and Kibbutz Ein Gev.Joe Yudin became a licensed tour guide in 1999. He completed his Master’s degree at the University of Haifa in the Land of Israel Studies and is currently studying toward a PhD.