By REUTERS
NOVEMBER 20, 2011 04:42
Tahrir Square Clashes 311
(photo credit: REUTERS)
Advertisement
Clashes erupted between protesters and police in Cairo and two other Egyptian cities, killing two people and wounding more than 700 in the biggest security challenge yet for the country's ruling generals days before scheduled elections.In Tahrir Square alone 750 were injured, Egyptian newspaper Al Aharam cited the Egyptian Health Ministry as saying. Four were injured in Alexandria and 12 in Suez. In scenes reminiscent of the 18-day uprising that toppled Hosni Mubarak from three decades of power in February, hundreds of youths chanted "The people want to topple the regime" as they rushed towards riot police, who fired rubber bullets and tear gas. 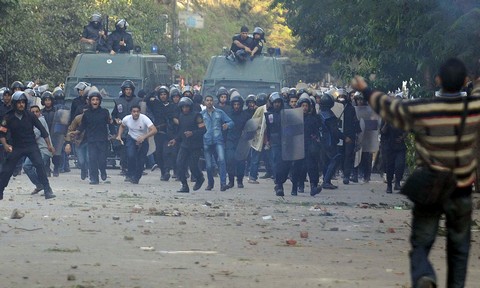 Protesters broke chunks of cement from pavements and hurled them at police in clashes in which police lost control of Cairo's landmark Tahrir Square twice in the day.A blaze broke out around midnight at the huge Mogamma state administration building overlooking Tahrir.RELATED:
Sinai Beduin join al-Qaida out of bitterness, not ideology
Cashing in Egypt's black cloudAs police fired round after round of tear gas at protesters near the interior ministry, closer to Tahrir protesters laid sheets of metal to block roads into the square.They unleashed 20 trucks to forcefully disperse a few dozen peaceful protesters this morning," Salah Saeed said as he handed out vinegar-doused napkins to protect protesters against the tear gas."Now thousands of Egyptians are protesting in Tahrir. We don't need the corrupt interior ministry or the military council," he said.Staggered voting is due to begin on November 28 but could be disrupted if violence spreads.The vote is being overshadowed by a row between political parties and the government over ground rules for a draft constitution that could leave the army free of civilian control.The army won popular backing during Mubarak's overthrow for maintaining order and pledging to hand power to an elected government, but support has ebbed over its use of military trials for civilians and suspicion that it wants to continue to wield the levers of power after a new government is sworn in.A security official said on Saturday police had used lawful methods to deal with "troublemakers". Protesters said they were incensed by brutal police tactics to break up a peaceful sit-in.State news agency MENA quoted the health ministry's spokesman as saying 676 people had been hurt in Cairo and that Ahmed Mahmoud, a 23-year-old demonstrator, died in hospital. MENA reported another death in Egypt's second city Alexandria. 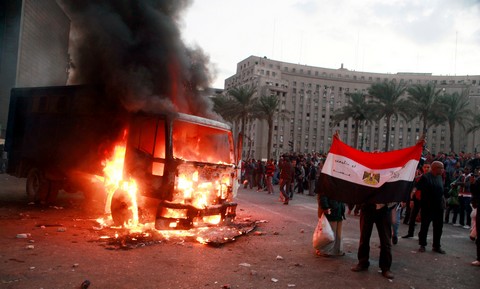 The army stayed away from the fighting."I tell you do not leave the square. This square will lead the way from now on," presidential candidate Hazem Salah Abu Ismail, a hardline Islamist, told a group of protesters early on Sunday. "Tomorrow the whole of Egypt will follow your lead."
Unrest spreads to Alexandria and SuezAbout 5,000 protesters had converged on Tahrir on Saturday afternoon when police tried to evict the remnants of a 50,000-strong demonstration a day earlier, mostly by Islamists demanding the departure of the military.Buildings and two cars in the square were set on fire, witnesses said. A third vehicle close to the Arab League's headquarters was also burned.Police beat the protesters, most of whom were not Islamists, with batons and fired tear gas to regain control of Tahrir, only to retreat after night fell.Protests erupted in other cities. About 800 people gathered in front of the security directorate in Egypt's second city Alexandria and chanted: "Interior Ministry officials are thugs."A witness heard repeated gunfire in the area. It was not clear whether the shots were live bullets. One person covered in blood was carried off to hospital on a motorcycle.About 1,000 gathered outside a police station in the eastern city of Suez, threw stones at it and tried to force their way in. Police fired tear gas and shot into the air.Protesters in Suez tore down banners of former members of Mubarak's disbanded party who are running in the election.Liberal groups are dismayed by the military trials of thousands of civilians and the army's failure to scrap a hated emergency law.Islamists eyeing a strong showing in the next parliament suspect the army council wants to curtail their influence and is maneuveringto stay in power from behind the scenes.