An Olah Reports From Nepal

Yardena Schwartz is living her dream of being a foreign correspondent in Israel, and flew to Nepal to report on the aftermath of the Nepal earthquake. 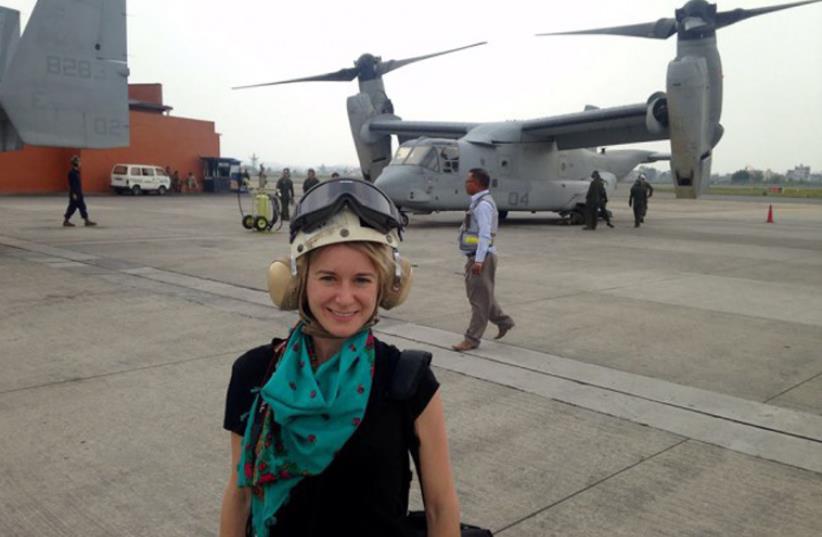 An Olah Reports From Nepal
(photo credit: NEFESH B'NEFESH)
Advertisement
Yardena Schwartz, 29, had always dreamt of becoming a foreign correspondent in Israel. While studying abroad at Tel Aviv University, she had been fascinated by Israel’s rich culture, and the many stories that weren’t being told.
“I felt like Israel was a place that was always being covered, but the same topics were constantly in the news,” said Yardena. “There are so many stories other than the conflict and peace talks.”
At the University of Delaware, Yardena had studied international relations with a concentration in the Middle East, yet she still needed journalism experience. After college, she was hired to be a production assistant at ABC News. From there, Yardena began rising through the TV journalism ranks, eventually becoming a producer for Andrea Mitchell Reports on MSNBC.
With an impressive resume and a Master’s degree from Columbia’s Journalism School, Yardena decided that it was time to move to Israel to pursue her dream. “I wanted to be reporting from the field, meeting people face-to-face, developing relationships with them, and then bringing the stories I uncovered to the masses,” said Yardena.
Once Yardena made Aliyah with Nefesh B’Nefesh, she didn’t have any writing jobs set up. But she quickly tapped into her contacts, getting a production gig with PBS News Hour and former NBC correspondent, Martin Fletcher, and then writing articles for Haaretz and MSNBC, among other publications.
Soon, Yardena was reporting the kind of quirky and colorful stories that first made her fall in love with journalism–including articles about Israel’s surprising tattoo culture, a group of Jewish settlers who protested part of the security barrier, and one of the last living socialist kibbutzim.
Then, in early May, an earthquake struck Nepal, and Yardena learned about Israel’s rescue work there. “I thought it was fascinating that a country of eight million people had set up the largest field hospital in Nepal,” she said. That morning, she pitched article ideas about Israel’s aid effort to a few US-based publications. Less than 24 hours later, Yardena was on a plane headed to Kathmandu.
During her five days in Nepal, Yardena got to know the many medical professionals who had traveled from Israel, including the head doctor of Shaare Zedek’s internal medicine unit, as well as the Nepali patients who had suffered injuries.
One 12-year-old girl had been stuck under a rock for five days before her brother found her. Her aunt had died by her side, and the girl’s skull had been fractured in a landslide. When an Israeli rescue team drove her the eight hours from her village to the field hospital in Kathmandu, the left side of the girl’s body was paralyzed. The Israeli team operated on her and five days later, she could move again.
Yet, with a shaved head and without her parents nearby, the girl was still depressed. “Volunteer clowns came by to cheer her up, and a nurse painted her nails pink,” said Yardena. “The Israeli team wasn’t there just to operate on her, but to support her mentally, too.”
Yardena also met a Nepali dancer, who had his arm cut off when the wall of his home fell on him. The Israeli team performed a proper amputation and nicknamed him, “Trumpeldor,” for the Jewish war hero who lost his arm in the Russo-Japanese war and then became a symbol of heroism in Israel.
Yardena returned to Israel with enough material for two articles, one of which was 5,000 words–long enough to “do the story justice.”
“I once dreamt that I’d be doing what I’m doing,” said Yardena. “Reporting the stories I wanted to write–with Israel as my base, and then writing them up at cafes in Tel Aviv.”