Alejandro Mayorkas, the Cuban-Jewish attorney who may head Biden's DHS

Mayorkas' ties with Israel extend beyond his family. In 2016, he spearheaded a deal to automate the sharing of cyber-data between Israel and the US. 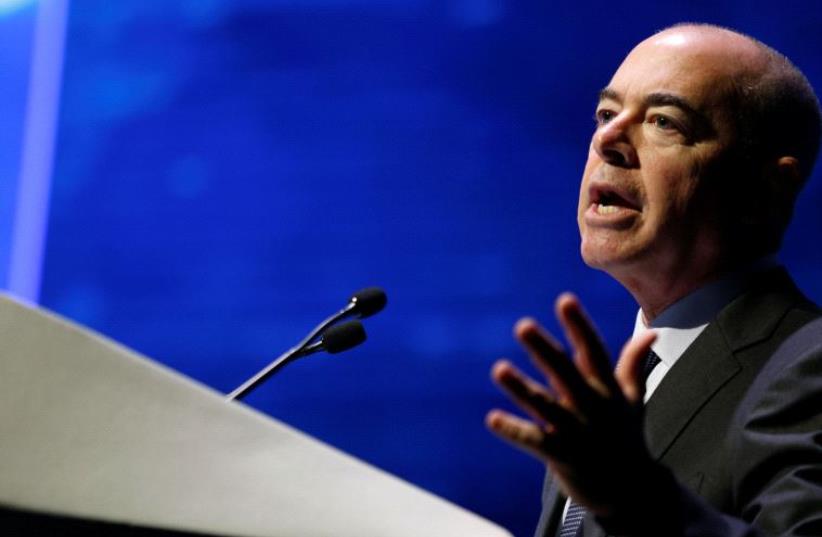 Alejandro Mayorkas, US Deputy Secretary of Homeland Security gestures as he speaks during the annual Cyberweek conference at Tel Aviv University, Israel June 20, 2016.
(photo credit: REUTERS)
Advertisement
Alejandro Mayorkas, former deputy secretary of the Department of Homeland Security during the Obama administration, has been floated as a major contender to become both the first Latino and the first immigrant to lead the DHS, if confirmed by the Republican Senate.
While Mayorkas, 60, was born in Cuba, his family moved to the US when he was only a year old. His father was a Cuban native with Sephardic roots and his mother was a Romanian Jew who fled the holocaust to Cuba (as many other family members fled to Israel), during a time when US policies “were not the most welcoming,” to refugees, he told The Jerusalem Post in a 2016 interview.
In the same interview, Mayorkas described his role in negotiating Washington's normalization agreement with Cuba, saying “we agreed to cooperate to ensure the security of ports, cargo; the security of people, of travel – a very foundational agreement and the first reached between the two countries.”
The former deputy secretary recounted that growing up, he always had a strong sense of his “identity as a refugee from Cuba; a very strong identity as a Cuban-American... as well as a member of the Hispanic community in the US, and a strong Jewish identity.”
He said that he first visited Israel in 1977 and continued to visit multiple times in his capacity at the Department of Homeland Security, catching up with relatives he had not seen in quite some time.
Married with three daughters, he said that he has passed on to his children all of the above identities, and he was recently honored by the Board of Directors of the Jewish Federations “for work combating antisemitism as part of [his] Homeland Security responsibilities.”
Mayorkas' ties with Israel extend beyond his family. In 2016, he spearheaded a deal to automate the sharing of cyber-data between Israel and the US.
In addition, during his three-year tenure as deputy DHS secretary, Mayorkas was vocal in his opposition against antisemitism, allocating a large majority of non-profit security grants to combating antisemitic extremism online, as well as implementing counterterrorism measures to protect houses of worship and Jewish institutions.
Mayorkas was also responsible for implementing the Deferred Action for Childhood Arrivals (DACA) program while director of United States Citizenship and Immigration Services (CIS) – a program which was categorically opposed by Republican congressmen at the time.
No Republicans voted to confirm him as deputy secretary in 2013, which looks to be an indicator for an uphill battle for the top position within the department.
Mayorkas is also expected to come under fire for a 2015 inspector general’s report that claimed he was involved with "specific individuals or groups... being given special access or consideration" in the EB-5 visa program.
According to Jewish Insider, Mayorkas is one of four Democrats who have been floated as candidates to head DHS.
California Attorney-General Xavier Becerra has been mentioned for a number of key roles both in Washington and his home state, including DHS secretary, US attorney-general and a potential pick to serve out the remaining two years of Vice President-elect Kamala Harris’s Senate term. Another candidate, Vanita Gupta, was tapped as a member of the president-elect’s taskforce on COVID-19.
Yonah Jeremy Bob, Aaron Reich and Jerusalem Post Staff contributed to this article.