“Eliminating the staff that advance these efforts would gut the US capacity to fight antisemitism at a time when it is flaring,” ADL CEO Jonathan Greenblatt said. 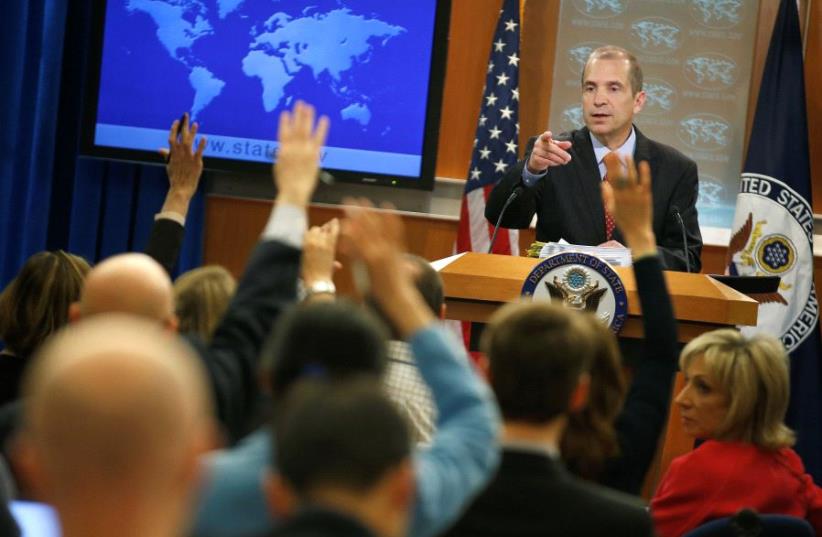 Mark Toner takes a question during a news briefing at the State Department in Washington, US, March 7, 2017.
(photo credit: REUTERS)
Advertisement
The Trump administration will appoint a special envoy to monitor and combat antisemitism, according to State Department spokesman Mark Toner.The envoy post has been vacant since Trump took office in January. On Thursday, JTA reported that the envoy’s office staff could be eliminated soon due to new State Department employment rules. The envoy is responsible for keeping tabs on global antisemitism and advising other countries in fighting it.In a statement to JTA Friday, Toner didn’t address whether the staff would remain intact. But he said the department will continue its work to protect religious freedoms globally, and that it has selected candidates for the envoy post. Toner did not say when the envoy would be appointed.Several senior positions at the State Department remain vacant.
Spicer says Hitler "didn"t even sink to using chemical weapons" (credit: REUTERS)
“The Department remains committed to advancing the protection of basic human freedoms and values including the unimpeded practice of religion and protection of communities of faith from persecution in every form,” the statement said. “There have been no actions taken to limit or close the offices in the Department dedicated to this pursuit. Candidates have been identified for this role.”In his Thursday press briefing, Toner said a hiring freeze remains in place at the State Department, even though a wider hiring freeze across the federal government ended this week. He said the freeze may continue until the department begins implementing a planned reorganization later this year.On Thursday, a former State Department official, who spoke to JTA on the condition of anonymity, said a personnel directive would remove the three or four staff members working in the antisemitism envoy’s office. The directive is due to take effect later this month.Toner’s statement to JTA comes after several politicians and Jewish leaders called on Trump to fill the post. Two Democratic congresspeople, Nita Lowey of New York and Ted Deutch of Florida, said the envoy is necessary in light of rising antisemitism. Samantha Power, the former United States ambassador to the United Nations, also demanded Trump appoint an envoy.Jewish organizations also called on Trump to fill the position, which was created by congressional legislation in 2004 and was last held by Ira Forman. The World Jewish Congress said that increasing antisemitism in Europe and elsewhere proves the need for a US envoy. The Anti-Defamation League called the position’s creation “a watershed moment in the fight against anti-Jewish hatred,” and demanded that Secretary of State Rex Tillerson clarify how the department will fight antisemitism while the post remains empty.“Eliminating the staff that advance these efforts would gut the US capacity to fight antisemitism at a time when it is flaring,” ADL CEO Jonathan Greenblatt said in a statement, adding that the envoy post “was the strongest possible signal to our allies and to the world that fighting antisemitism is a fixture of American foreign policy.”Rabbi Jonah Pesner, director of the Religious Action Center, the Reform movement’s legislative advocacy wing, called eliminating the office staff a “tremendous mistake.”