It is wrong to overlook the Judeo-phobic bigotry that pollutes the worldview of Black Lives Matter and its political allies. 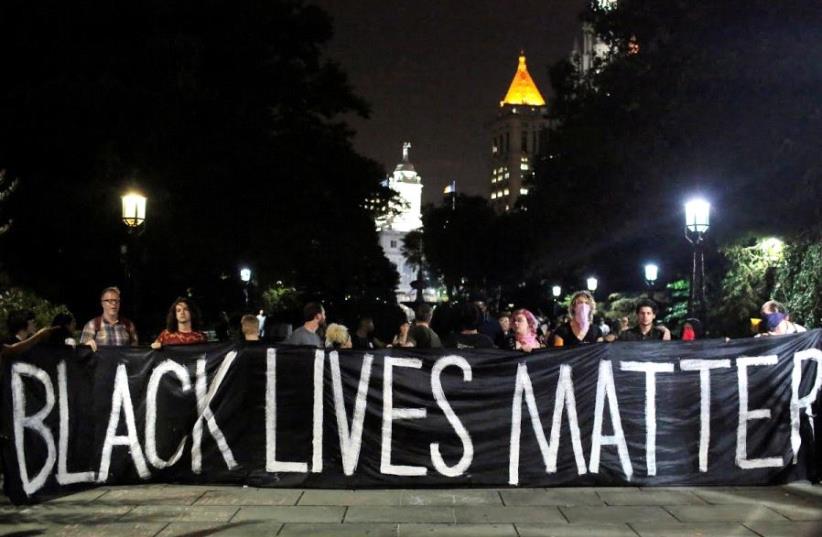 People hold up a banner during a Black Lives Matter protest outside City Hall in Manhattan, New York
(photo credit: REUTERS)
Advertisement
If there’s anything the Jews have learned from their blood-soaked history, it’s when someone says they mean to harm you, take them at their word. So to those who suggest that we should excuse the excesses of Black Lives Matter (BLM) for the sake of a greater good, my answer is simple: No.I say no because opposition to one form of racism does not confer immunity to criticism over other forms of ethnic bigotry. Per this fair and uniform standard, the BLM movement stands condemned by the antisemitic words and deeds of its leaders and activists.Black Lives Matter spokespersons proclaim their fervent support for Palestinian nationalism while denouncing the very existence of Israel as the sovereign state of the Jewish people. This means BLM has aligned itself with a political movement that denies the right of Jewish national self-determination and seeks Israel’s eradication.Seventy-two years after its establishment in the ancestral homeland of the Jews, Israel now hosts the largest Jewish population in the world. The Jewish state is the focal point of global Judaic culture and civilization.The fates of the Jewish state and Jewish people are inseparably intertwined. Existential animus toward the former, by definition, entails genocidal hostility toward the latter.But the antisemitism that taints Black Lives Matter is not solely confined to the rarefied realm of anti-Zionist political philosophy. Over recent months we have witnessed a wave of gutter Jew-hatred that has culminated in physical violence.On the night of May 30, a rabble bearing BLM placards ran amok through the heavily Jewish Los Angeles neighborhood of Fairfax, yelling “F**k the police and kill the Jews!” Five synagogues and three Jewish schools were defaced with antisemitic graffiti during the course of what amounted to a pogrom.A local rabbi described the riot as “Kristallnacht all over again,” a reference to the “Night of Broken Glass” in 1938 when synagogues and Jewish-owned businesses were destroyed throughout Nazi Germany.Los Angeles BLM organizer Melina Abdullah was utterly unrepentant about the mob violence she helped to foment. She argued on Twitter that the antisemitic rampage was justified because, “This is an uprising, a rebellion, a revolt.”AT A RECENT street protest in Washington, DC, a BLM mob chanted “Israel we know you, you kill children too,” reviving the timeworn blood-libel accusation that triggered countless medieval anti-Jewish massacres.Black Lives Matter activists are also busy promoting a more modern antisemitic conspiracy theory by peddling the myth that the rogue Minneapolis police officer who murdered George Floyd was trained in torture tactics by Israel.Prominent BLM leaders show great affinity for Nation of Islam head Louis Farrakhan, a demagogue who preaches that persons of European descent are racially programmed toward cruelty. And while Farrakhan doesn’t like Caucasians, he’s absolutely feral toward Jews.In a recent sermon, he referred to “Satanic Jews who have infected the whole world with poison and deceit,” and said, “When you want something in this world, the Jew holds the door.”
Yet none of this antisemitic bile has deterred prominent BLM leaders from making common cause with the Nation of Islam movement. The aforementioned Abdullah is an outspoken Farrakhan supporter. In Memphis, Tennessee, local BLM organizer Tami Sawyer proudly proclaims that she has been a featured speaker at several Nation of Islam conferences.Lest I be accused of asserting guilt by association, I ask the reader to envisage a movement whose leaders showed similar affinity for the mirror opposite of Farrakhan’s black supremacy.In our current political culture, anyone who displays even a hint of tolerance for white nationalism is driven in disgrace from the public square, and rightly so.But by the same moral measure, it is wrong to overlook the Judeo-phobic bigotry that pollutes the worldview of Black Lives Matter and its political allies.It makes no difference to the Jewish community whether the toxins of antisemitism flow from the far Left or the far Right. Whether shouts of “Kill the Jews” come from Black Lives Matter or the Aryan Nations, it’s all the same to us. The bigotry is identical.So to the activists of BLM I say, we have heard you, and we at the Australian Jewish Association take you at your word.Those who wish ill upon the Jews should be aware that our days of shtetl meekness are over. Just as Israel will never commit national suicide to placate the wrath of pro-Palestinian leftists, the Jewish Diaspora will not remain silent in the face of antisemitism from any quarter.The most elementary mandate of human morality holds that all lives matter – black, white, Asian, indigenous, and Jewish as well. The sooner we can return to this self-evident truth, the better.The writer is executive director of the Australian Jewish Association.