"Very often at our news conferences, we have agent provocateurs or representatives of hate sites on the internet who show up to disrupt or cause problems." 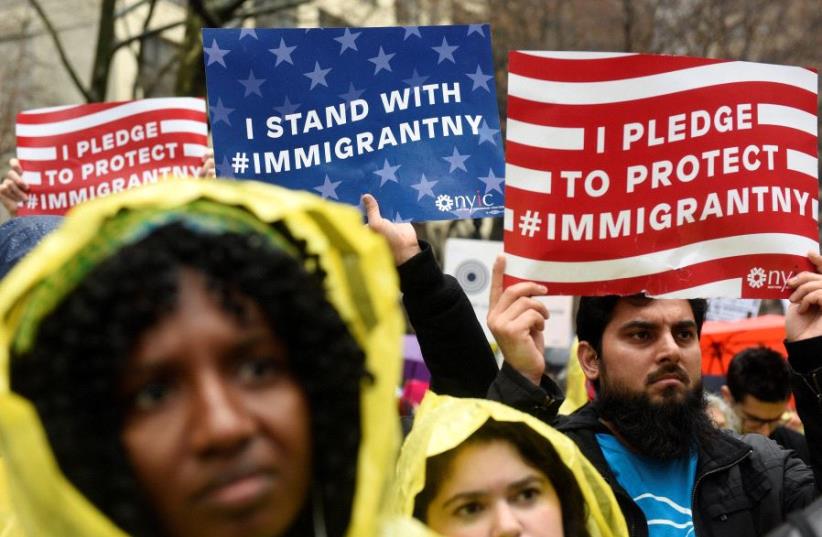 People hold up signs before marching to Trump Tower during a protest organized by the New York Immigration Coalition against then President-elect Donald Trump, December 18, 2016
(photo credit: REUTERS)
Advertisement
A reporter for far-right online outlet Breitbart News was ordered to leave a conference held by an American-Muslim advocacy group in Washington on Monday, CNN reported. Organizers from the Council on American-Islamic Relations (CAIR) reportedly ejected Breitbart reporter Neil Munro after he had arrived for a press briefing on the group's plans to challenge US President Donald Trump's controversial executive order on immigration from seven majority-Muslim nations. Munro initially protested the order to leave the conference at CAIR's headquarters, arguing that: "This is America...We have freedom of speech, freedom of movement.""I respect property rights. I respect freedom of speech," the Breitbart reporter was quoted as saying before CAIR spokesman, Ibrahim Hooper, urged him to "please leave."He eventually agreed to leave the event after organizers said it was a private gathering and threatened to have a police escort remove Munro, CNN reported.CAIR spokesman Hooper told CNN that the Muslim activism group has long-banned Breitbart from its event."Very often at our news conferences, we have agent provocateurs or representatives of hate sites on the internet who show up to disrupt or cause problems," Hooper told CNN. "We regard Breitbart as one of those anti-Muslim, white supremacist websites that we don't allow at our news conferences."  The incident did not represent the first time Munro has been thrown out of a CAIR event. After he was booted from a press briefing held by the organization last year, Munro labeled CAIR as the "most prominent advocacy group for orthodox radical Islam in the United States." The website and voice for the alt-right movement has been accused of propagating conspiracies and the rhetoric of a loose far-right confederation that includes hardcore nationalists, neo-Nazis, white supremacists and antisemites.Monday's incident came amid inflating tensions between CAIR and Breitbar. While conservative outlets and Republican lawmaker have accused CAIR of having ties with Hamas and radical Islam, the group denies such suspicions. The ADL has condemned the group for harboring an "anti-Israel agenda," noting an alleged FBI move to distance itself from CAIR due to unresolved suspicions its founders had links to Hamas and Muslim Brotherhood.It was reported that as of Monday night, neither Breitbart nor Munro responded to requests for comment on the matter. Increasing controversy emerged during the election campaign surrounded Breitbart after Trump appointed its former chairman Stephen Bannon as a chief administration strategist. Populist firebrand Bannon, whom Trump has offered a place on the US National Security Council, reportedly pushed a hard line on drafting Trump's executive order on immigration. Reuters contributed to this report.